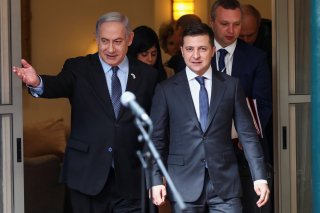 When Ukrainian president Volodymyr Zelensky nominated Mikheil Saakashvili to serve in his cabinet as vice prime minister for reform, pundits like Melinda Haring were quick to cry deja vu. True, this isn’t the ex-president of Georgia’s first rodeo in Ukraine. But there is reason to believe this one will turn out better than the last.

On one point, Haring is correct: Saakashvili’s first venture into Ukrainian politics ended with disappointment. In 2015, then-president Petro Poroshenko appointed Saakashvili governor of Ukraine’s Odessa region, citing his impressive track record as president of Georgia. But Poroshenko’s move turned out to be more of a public relations ploy than a genuine step forward.

In Odessa, Saakashvili unveiled an ambitious agenda to cut over-regulation, rein in bureaucracy, and eradicate the graft that had long sapped Ukraine’s biggest port of its economic potential. In challenging the status quo, Saakashvili provoked the ire of powerful vested interests—local authorities who relied on the corrupt system for survival. Frustrated by the lack of support from Kiev, Saakashvili resigned and went into opposition.

His popularity became a threat to Poroshenko, whose rating had dwindled to single digits while reforms stalled. Poroshenko soon revoked Saakashvili’s citizenship and forced him into exile. Last year, after beating Poroshenko in a landslide to win the presidency, Zelensky returned Saakashvili’s Ukrainian passport. The move prompted speculation that Zelensky, elected with a mandate to push forward where his predecessor had failed, would offer Saakashvili a position in his government. But for the first year of Zelensky’s presidency, no offer came.

So why now? There are two likely explanations.

First, amid the coronavirus pandemic, Ukraine—like the rest of the world—faces an economic crisis of stunning magnitude. GDP is expected to contract by 7.7 percent this year; unemployment has already skyrocketed. Navigating this upheaval demands decisive and bold action. And even Saakashvili’s harshest critics admit he’s nothing if not decisive and bold.

In crisis, Saakashvili sees an opportunity for Ukraine: The International Monetary Fund (IMF) has signaled willingness to boost support for the country’s economic recovery. But a favorable IMF deal—and the billions in public and private investment that the IMF’s seal of approval would unlock—can only be realized if Ukraine makes real progress on its reform agenda.

Enter Saakashvili. Zelensky sees a leading role for the Columbia-educated ex-president in negotiations with Ukraine’s international creditors. It’s not hard to understand why—during Saakashvili’s presidency, foreign investment in Georgia ballooned and GDP quadrupled. This transformation of Georgia was made possible by constructive cooperation with international financial institutions.

Ukraine sorely needs the same miracle. Saakashvili has already called on the IMF to double the $4 billion tentatively offered to aid Ukraine this year—and he can make the case that Ukraine requires more support to rebuild its pandemic-hit economy. International investors have welcomed the news of Saakashvili’s appointment; the president of the American Chamber of Commerce in Ukraine expressed hope Saakashvili would “shake things up” and “boost economic growth.” Ukraine expert Anders Aslund echoed this sentiment.

In other words, Haring’s claim that Zelensky overestimates Saakashvili’s reputation in the West appears to be unfounded.

Second, in appointing Saakashvili, Zelensky shores up support from his voter base. Zelensky’s victory was at its core a rebuke of the establishment. Ukrainians were so fed up with the political class that, last year, 73 percent voted for an actor whose only prior brush with politics was playing the president in a TV satire. Saakashvili has experience, but his zero-tolerance approach to corruption appeals to the same anti-establishment sentiments. He often appears in Ukrainian and international media to support the president. Recently, polling firm Ipsos asked voters who would be the most effective prime minister, and Saakashvili led the pack.

Judging by his enemies, Saakashvili generally earns high marks. His appointment has drawn ire from the region’s most regressive forces. Russian state television wasted no time attacking Zelensky for inviting a “war criminal” into his government. In Ukraine, the pro-Kremlin Opposition Bloc has vowed to oppose Saakashvili’s nomination. But the biggest temper tantrum arose from Saakashvili’s homeland, now ruled informally by Bidzina Ivanishvili, an oligarch who made his fortune in Russia. In response to Zelensky’s decision, Georgia threatened to recall its ambassador from Kiev.

In short, Zelensky’s choice makes sense. Haring’s response does not.

Haring’s prediction that Saakachvili will fall out with Zelensky, as he did with Poroshenko, overlooks the key difference between Zelensky and his predecessor. Poroshenko was an oligarch first, a president second. Ultimately, he lacked the political will to transform a system that had benefited him to the tune of billions.

And in claiming Saakashvili will fail to reform Ukraine because he failed to reform Odessa, Haring contradicts herself. She later points out that Saakashvili’s efforts were blocked by Odessa mayor Gennady Trukhanov—an erstwhile ally of Poroshenko. The president ensured Trukhanov remained in office despite his embezzlement charges, evident ties to organized crime, and documented corruption schemes. Yet Saakashvili was the failure?

If he had enjoyed support instead of resistance from Kiev, then perhaps Odessa could have been another of his success stories.

Saakashvili’s turbulent history in Ukraine gives Zelensky the benefit of hindsight. The president knows Saakashvili will not allow himself to be used in a facade of half-hearted reform attempts. On the contrary, Zelensky’s decision has reaffirmed his commitment to real change. In appointing Saakashvili, Zelensky is seizing a critical moment to push forward more boldly than ever on the reform agenda.

And for Ukraine, that’s long overdue.

Christina Pushaw holds a MA in European & Eurasian Studies from Johns Hopkins School of Advanced International Studies (SAIS). She has served as an advisor to politicians in Eastern Europe, including Mikheil Saakashvili. She is based in Tbilisi, Georgia and Washington, DC.