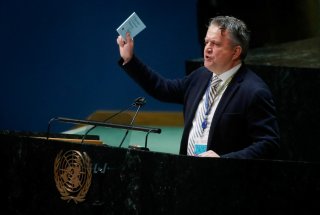 On March 2, 2022, the United Nations General Assembly approved a resolution condemning Russia’s invasion of Ukraine and demanding the immediate withdrawal of Russian military forces. The Biden administration was pleased with the outcome, and on the surface, U.S. officials had reason for satisfaction since the vote was overwhelmingly in favor. 141 countries voted for the resolution, while just five voted against it. The negative votes came from Russia, three reliable client states—Belarus, Syria, and North Korea—and Eritrea. An examination beneath the surface of the vote, however, reveals some interesting and troubling results for Washington’s goal of forging an impregnable global coalition to inflict financial and political pain on Vladimir Putin’s government for its aggression against Ukraine.

One factor that stands out immediately is the large number of abstentions. Because of the high priority that Washington has given to creating an overwhelming coalition against Moscow, it takes some courage for other governments to refuse to go along. The easier course would be to cast an affirmative vote, especially since the nonbinding resolution was pure symbolism that did not require any significant action on the part of UN members. Yet thirty-five countries refused to placate the United States, choosing instead to abstain.

Some names on the roster of abstentions did not come as much of a surprise. The Central Asian states of Kazakhstan, Tajikistan, and Kyrgyzstan have been under Moscow’s strong influence since the breakup of the Soviet Union in late 1991. A similar principle applies to Armenia. Cuba is a long-standing client from the Soviet era, and Latin America’s newer left-wing regimes in Nicaragua, Bolivia, and El Salvador are seeking Russia’s financial and political backing. Moscow has been working diligently to expand its influence with those and other countries in the region. Some other Russian clients, most notably Turkmenistan, Uzbekistan, and Venezuela, chose not to cast votes at all—which was the functional equivalent of an abstention.

Other nations on the list were much more surprising, though, and their abstentions indicate the limits of Washington’s influence. There were several recalcitrant states from the greater Middle East, most notably Algeria, Iran, and the biggest shock of all, Iraq. Given Baghdad’s extensive military and economic dependence on the United States, one would have thought that Iraq’s vote would have been firmly in the affirmative column.

Another big surprise was the large bloc of African members that abstained. That group included Burundi, the Central African Republic, Congo, Equatorial Guinea, Mali, Mozambique, Madagascar, Namibia, Senegal, Sudan, South Sudan, Zimbabwe, and perhaps the biggest economic and political player on the continent, South Africa. Several others discreetly did not vote at all.

Even more troubling for the United States was when key countries in South Asia and East Asia —especially India and China—refused to vote in favor of the resolution. The extent of Washington’s dissatisfaction became clear when Biden personally criticized both countries for their decision.

Not only did India maintain its neutrality but it also brought along Sri Lanka and Bangladesh in its wake. Moreover, New Delhi’s longtime adversary—and Washington’s treaty ally—Pakistan joined the ranks of countries casting abstentions. Vietnam and Mongolia declined to support the resolution. The former’s vote was especially disappointing, since Washington has been actively courting Hanoi as an economic and security partner for years.

The biggest sign of potential trouble for U.S. policy, though, was China’s decision to abstain even with respect to a toothless, symbolic measure. Given the growing ties between Moscow and Beijing, it would be unrealistic for U.S. leaders to expect China to support any truly coercive measures against Russia. Indeed, there are ample signs that Washington’s clumsy, antagonistic policies have driven Russia and China into a close strategic partnership bordering on an outright alliance. Xi Jinping’s government has given multiple indications that it will not join in economic sanctions against Moscow. Indeed, Beijing is in a position to help cushion Russia against the impact of any sanctions that a U.S.-led coalition imposes and gain leverage in the bilateral relationship in the process.

Nevertheless, voting for the resolution would have been an easy way for Beijing to maintain the image of some balance in its policy regarding Russia, as well as emphasize to Moscow that its sympathy and support have definite limits. The decision by the Chinese delegation to avoid endorsing that resolution suggests just how close bilateral ties have become. It is likely that China will be a major impediment in implementing meaningful sanctions to pressure Russia to abandon its war in Ukraine.

The Biden administration boasts about the exceptional unity of the international community in opposing Moscow’s Ukraine adventure. One favorite piece of evidence officials cite is that even Switzerland has abandoned its centuries-old neutrality to join the effort. However, the UN vote is another indication on a growing list suggesting that claims of such unity are overblown. When more than 20 percent of the General Assembly’s membership refuses to embrace a purely feel-good measure Washington is pushing, the U.S.-sponsored global coalition looks fragile indeed. Political scientists frequently note that coalitions tend to be a mile wide but only an inch deep. In this case, given the extent of defections already, the U.S.-led coalition against Russia may be only a half-mile wide and less than an inch deep.