By Unifying the North, Syria Can Be Secured 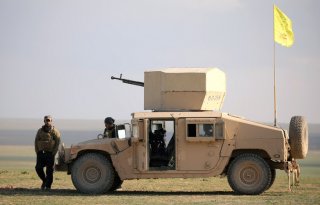 When U.S. president Joe Biden and Turkish president Recep Tayyip Erdogan held a bilateral summit on October 31, 2021, Syria was certainly among the discussed topics. Although the two leaders are far from agreement on Syria and the Middle East more broadly, the United States and Turkey stand to gain by collaborating with like-minded states to prioritize a people-focused policy in Syria. This collaboration could be one of the last meaningful opportunities for the decade-long war-torn country.

To date, Bashar al-Assad continues to violently seek ways to bring the entirety of Syria under his regime’s control, while Russia is not aiding the formation of a meaningful political process. This is relegating the Syrian people to the backseat as their lives deteriorate into rubble. The prospects for peace in Syria seem to be dimming daily and international fatigue not helping. Indeed, Syrians’ vision for their own country and their future is being overshadowed.

Presently, reconciling Syria’s northwest and northeast regions can be a catalyst for true reform in the country. Six million Syrians of diverse backgrounds live outside of the regime’s control in northern Syria. These people, who represent about 40 percent of Syria’s current population, are enduring extremely difficult living conditions, frequent displacement, and little rule of law. Previous diplomatic efforts to protect civilians and their infrastructure have failed in vain. Syrian civilians still seek a better life for themselves and for their children. Stability across the northern region will set the local communities on a better path, strengthening civil society and local governance over time.

The dominant military groups in both the northeast and northwest regions, the Syrian Democratic Forces (SDF) and Syrian National Army (SNA) respectively, claim they are fighting ISIS in collaboration with the international community. While that is not untrue, this mutual goal suffers because the two regions have become rivals in Syria’s conflict. Accusations made by each about the other never stop. Units of the SDF were accused of taking part in the besiegement of Aleppo in 2016, leading to one of the largest internal displacements of Syrians, as well as other hostile actions of shelling civilian neighborhoods. Some militias within the SNA, on the other hand, are accused of human rights violations in Afrin following Turkish military operations in 2018.

In addition, there are clear discrepancies when it comes to the level of stability between northeast and northwest Syria. This is true when it comes to civil society capacity building, human rights, and basic public services. The northeast region has greater financial resources from oil and agricultural products; has a more diverse population, and consists of a larger geographic space. On the other hand, the northwest is far more crowded, and it has built robust capacity to deliver basic services even though the regime has systematically targeted its hospitals, schools, and water resources.

The two northern regions could benefit from one another’s experiences and variable resources, but the lack of rule of law, political polarization, and factors external to Syria have hampered that cooperation. The benefits of establishing a unified strategy for Syria’s north would be numerous and more important than ever.

The United States and Turkey should partner to support cooperation between the two regions and their civilian leaderships. Partnerships should be goal-oriented and focused on counterterrorism collaboration and mutual respect for basic human rights. This cooperation will also neutralize Russian and Iranian influence, whose intervention to back the Assad regime has only deepened the human suffering and aided terrorist groups, such as ISIS.

Other long-term advantages of such cooperation include creating a credible diplomatic platform to broker a meaningful national Syrian dialogue. Such an arrangement will allow communities from the northeast and northwest regions an opportunity for reconciliation that is more likely to boost their vision for a peaceful Syrian future. Topics of dialogue will need to address religious and ethnic friction, human rights violations, and the strengthening of the rule of law. The dialogue will begin to address internal conflict and grievances and should certainly strive to create mechanisms that will ensure that future displacement does not repeat itself. Such a dialogue will also empower leaders to defend their respective communities in a cooperative way that serves the interests of both the northeast and northwest regions, now and in the future.

Internal insecurity in Syria is the result of a longstanding conflict in the country and should be addressed as such. Without support from the United States and like-minded nations, Syria’s diverse communities will remain rivals and the prospects for peace will ultimately collapse. The reconciliation of the northeast and northwest regions of the country can turn this tide. Avoiding a strategic approach such as this one will push Syria back into the Assad regime’s grinder. We’ve witnessed that nightmare. It must not be repeated.

Dr. Muhammad Bakr Ghbeis is President of Citizens for a Secure and Safe America.