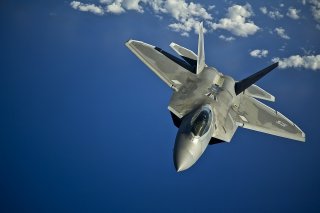 It has become clear that the U.S. Air Force now regards itself as an implement of sea power. Its metamorphosis is a beautiful thing to behold for any Western-leaning nautical enthusiast. In recent years, land-based warbirds have trained to smite ships at sea, practiced raiding island redoubts, and, in the case of the bomber fleet, doubled as precision minelayers. The latest marker along this trendline: on May 29 two B-1B Lancer (a.k.a. “Bone”) bombers staged an audacious display of U.S. and allied airpower over the Black Sea. Fighter jets from Ukraine, Poland, and Romania escorted the bombers at different stages of their ultra-long-range mission from South Dakota across the Atlantic Ocean deep into Eurasia and back.

The spokesmen for the U.S. Air Forces in Europe (USAFE) command disclosed afterward that the Bone flight had simulated assaulting the Russian Black Sea Fleet with AGM-158C long-range anti-ship missiles (LRASMs), a fresh addition to America’s armory for saltwater warfare. The LRASM restores range and hitting power to the maritime arsenal after three decades of post-Cold War neglect. This lethal “bird” can assail targets over five hundred miles distant. (Probably more; the armed forces habitually lowball figures they approve for public release.) Not just the land-based B-1B but carrier-based U.S. Navy F/A-18 E/F Super Hornet aircraft can now fire LRASMs. In all likelihood surface warships and ground artillery will tote them in the coming years.

An official spokesman for USAFE touted the Black Sea mission for adding “deterrent value not only to the United States but to our allies and partners.” Future adversaries, that is, must fret about missile salvos raining down not just from U.S. Navy ships or warplanes but from land-based bombers. “These capabilities,” concluded the press release, “should weigh heavily” on the minds of decisionmakers in capitals ranging from Moscow to Beijing to Tehran.

That’s a profound statement, more so than USAFE may realize. After all, deterrence is a multiple of capability, America’s resolve to use that capability when it says it will, and an antagonist’s belief in America’s capability and resolve to use it. This is multiplication, not addition. If any of those three variables is zero, then so is deterrence. That’s the Henry Kissinger formula. USAFE is saying that LRASM-armed bombers screened by fighters amplify the United States’ combat punch in the marine realm—including around Russia’s immediate periphery. Whether boosting air-warfare capability boosts U.S. commanders’ will to use that capability in action constitutes a question of significant import. Whether Moscow believes in America’s compound of capability and willpower is most important of all.

If bomber training sallies make believers out of Vladimir Putin and his supporters, then the Kremlin may think twice before taking actions Washington wishes to proscribe—actions such as making war on or otherwise abusing U.S. allies in the Black Sea basin. Putin will know any punch will set in motion a crushing counterpunch.

Take those ingredients of deterrence in turn. First, capability. Suppose the LRASM lives up to its billing as a long-range, precision-guided, stealthy missile capable of evading hostile defenses and striking hard from a distance. B-1Bs can reportedly carry up to twenty-four rounds apiece. A flight of two could land a grievous blow against a hostile fleet—especially if aviators came upon that fleet resting at its moorings. After all, a ship tethered to a pier may as well be a building, a ship at anchor nearly so. A stationary target is an easy target for precision-guided arms. So far USAFE’s salesmanship stands up.

But think about it. It’s one thing to land one heavy hit. If need be, could U.S. Air Force bombers sustain an air campaign over the Black Sea from South Dakota or elsewhere in North America, considering the distances and flight times involved and the possibility that enemy interceptors might engage them along their way? Strategy guru J. C. Wylie sounds skeptical. Wylie describes air power as a “cumulative” form of warfare. Aircraft raid targets all over the map. Tactical engagements need not and generally do not follow one another in either time or space. Just look at any map of the combined bomber offensive against Nazi Germany to witness the paint-splatter effect characteristic of cumulative operations.

Wylie’s implication? Airpower can inflict dire injury over time, as it did against the German industry and ground forces. It does so by wearing down an opponent through piecemeal attacks that are indecisive in themselves yet, taken in aggregate and prosecuted relentlessly against the right targets, add up to immense strategic effect. A venture like last month’s B-1B mission cannot decide a conflict in an afternoon unless a single formation of warplanes can mete out genuinely grave harm—enough to incapacitate the foe or persuade its leadership it cannot prevail in a trial of arms, or persuade its leadership it cannot prevail at a cost acceptable to it. The leadership submits under such an onslaught either because it must or because it decides to.

B-29s dropping atomic bombs on Hiroshima and Nagasaki in 1945 approached that fateful ideal. Does a single salvo of LRASMs equate to conventional firepower of doomsday magnitude?

It’s unclear but doubtful. If not, then here’s what is clear. Sorties from distant airfields disperse aerial striking power in time, spacing out airstrikes as flights leave their bases, make their bombing runs, and return home. Dispersal in time, in other words, attenuates the combat power on scene at any given time. It appears, then, that U.S. Air Force commanders envision striking blows that are concentrated in space, hitting individual targets hard. But whether they can repeat concentrated blows against a target—and induce a balky adversary to yield—is a question tacticians must answer.

Second, resolve. Resolve interacts with perceptions of capability. Senior commanders and their political masters are more apt to use a weapon they estimate stands a good chance of attaining the effects they desire than a weapon they fear may prove ineffectual. A candid appraisal of the B-1B/LRASM combination, coupled with wargames or other means of vetting hardware, tactics, and strategy, is crucial to building confidence among decisionmakers entrusted with determining what operations the U.S. Air Force and affiliated joint forces should undertake.

In all likelihood, a joint and allied campaign spearheaded not just by U.S.-based bombers but by air and naval forces positioned closer to likely scenes of battle would inspire greater confidence—stiffening willpower among those who would give the order. In Wylie’s terms, such a campaign would strike repeated concentrated blows in space while shortening the interludes between. Combined forces would approach the ideal of concentrating in space and time for maximum strategic gain.

Capability and the will to use it are the components of strength. Maximize both and you project an image of dauntless power.

And lastly, belief. Hostile leaders, not you, decide whether they find the deterrent image you project credible. To deter, even the most muscular, resolute combatant must convince its antagonist that it wields sufficient power with sufficient resolution. That it can and will carry out its deterrent threats, in other words. If Moscow believes the Black Sea Fleet could ride out a U.S. air offensive—especially an intermittent offensive or a one-off strike along the lines of last month’s practice run—then the leadership may not be deterred.

This is a real possibility. Russian leaders understand that the Black Sea is their “near abroad” or home turf. That being the case, the Russian armed forces boast a wealth of advantages in the region. Land-based aircraft and missiles can menace approaching allied aircraft and surface forces, and do so in bulk. Russia outmatches its neighbors by military measures. One neighbor and ostensible opponent, Turkey, is a NATO member estranged from its allies and cozy with Moscow.

In short, Russian leaders must consider the strategic surroundings along their southern rampart hospitable on the whole. It will take more than a lone bomber mission from afar—no matter how impressive—to rattle Moscow’s complacency.