The U.S.-China Competition for the Indo-Pacific Is Just Beginning 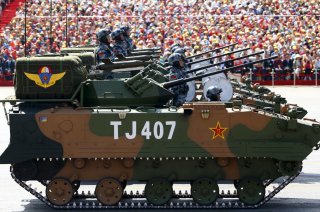 The Asia-Pacific has become one of the most prominent focal points for both the West and China. Overwhelmingly, the central themes of engagement in the region relate to trade and development, security cooperation, and global governance. It is within this context that both the West and China each seek to strengthen their respective ties to, and influence within, the region in furtherance of their respective national interests.

Although markedly diminished in its engagement with the Asia-Pacific during the Trump administration, the United States has sought to dramatically reorient its approach to the region under the Biden administration. In 2021, Australia, the United Kingdom, and the United States announced a new security partnership, AUKUS, in which they will pursue the development of new deterrence capabilities for Australia and facilitate greater innovation through technical collaboration. Under the Biden administration, high-level representation to the region has again become a regular occurrence as Secretary of State Antony Blinken, Vice President Kamala Harris, and most recently, President Joe Biden, have each made visits to the region. At the U.S.-ASEAN Special Summit in mid-May, the United States announced several commitments to ASEAN and the broader region through support for development and climate action, as well as deeper and more comprehensive trade opportunities.

Major U.S. partners have also stepped up their engagement in the region, largely in concert with Washington. Leaders from Australia, India, Japan, and the United States recently met at the fourth Quad Summit in Japan to underscore their joint commitment to regional peace and stability and announced a new initiative to promote maritime security, the Indo-Pacific Partnership for Maritime Domain Awareness (IPMDA), in addition to efforts to support global health, climate, space, cybersecurity, and infrastructure.

For the West, these developments are some of the latest in a series of coordinated efforts focused on the Asia-Pacific. This week, in Japan, Biden announced the launch of the Indo-Pacific Economic Framework for Prosperity (IPEF), with twelve other states initially participating alongside the United States. Most recently, at an event held by the Asia Society, Secretary Blinken outlined the Biden administration’s policy towards China. The administration’s policy seeks to “invest, align, and compete” across key partnerships and institutions to support global governance and cooperation for peace and security, in response to what the United States considers China’s growing threats to regional and global stability.

Concurrent with Western developments, China has sought to draw its own path within the Asia-Pacific, and in recent months clinched a security agreement with the Solomon Islands, surprising the West and raising concerns for regional security and sovereignty. Earlier this week, China shared its plans for a series of upcoming visits to numerous Pacific island countries in pursuit of new bilateral agreements on trade and security cooperation, albeit largely on China’s own terms.

As the dust from recent diplomatic revelations settles, several questions arise in relation to the challenges faced by the region. First, what are the broad contours of relations in the region and how may potential risks be characterized? Moreover, what may hold for the primary constituents of the nations in the region, namely, the human populations of each respective country? Are there any potential equilibria that may lead to greater regional stability and long-term benefit? Further inquiry along these lines provides insight into the various security implications of increased engagement in the Asia-Pacific in the context of strategic competition.

At present, the relations and interactions in the Asia-Pacific are largely characterized by an environment in which many countries are still attempting to fully recover from the impact of Covid-19, a series of ongoing supply chain interruptions and economic shocks, domestic political turnover, and fallout from escalating punitive exchanges with China. Countries throughout the region are likely to experience significant domestic pressures to overcome economic setbacks and return to a more regular state of internal affairs. In each case, regional stability is a key requirement for achieving a successful recovery and avoiding delayed growth. Yet, as the region attempts to navigate this period of recovery, additional risks stem from the increasingly contested international environment.

Managing some of the most severe risks to stability under strategic competition has been well studied, as in the framework put forth by Kevin Rudd, for example. Certain unforeseen actions and developments may still inadvertently present varying degrees of risk. The potential for conflict may arise by accident, for example, as a result of military exercises or provocations occurring in close proximity to areas of strategic or economic importance, as was the case in the recent joint China-Russia bomber drill held over the Japanese and East China seas.

Separate to direct risks from deteriorating relations, there are scenarios in which the populations in the region may still be indirectly impacted through second-order destabilizing effects arising from the intensely competitive strategic environment. One readily observed example from this class of risks is the downstream impact of the varied vaccine distribution that occurred due to vaccine diplomacy. For some countries, lack of access to a sufficient or readily available supply of vaccines due to coercive diplomacy led to extended periods of unprotected exposure to the virus, deepening the economic and health impacts and delaying a broader recovery.

For great powers, such second-order effects may be seen as some of the more unintentional and incidental costs of intense geopolitical competition. While the full cascades of adverse scenarios may indeed be difficult to predict, great powers must be mindful that risk may also flow in reverse, thereby exposing themselves to destabilizing effects from the broader region. In pursuit or maintenance of a position of relative strength, great powers may, for example, be entangled in a series of commitments they are unexpectedly unable to resolve. Such circumstances range from those that are particularly acute, as China may presently be experiencing vis-à-vis Russia, or more diffuse, developing over time through broader structural cascades.

In the long term, it is unlikely that regional stability will be achieved through complete domination by any one state in particular. Indeed, such scenarios are characteristic of disequilibria that may greatly destabilize the region. Each state must, of course, strive to develop a sufficient capacity to accommodate the potential challenges ahead. Yet, at the same time, parties to the region must recognize that many fundamental means for promoting a high level of security already exist in varying forms and that continued arms races may, in some cases, only offer limited benefit.

The interconnected, archipelagic nature of the Asia-Pacific is such that great power relations must be managed with maturity and restraint, in addition to resolve. In this context, there are numerous positive equilibria defined by constructive and cooperative actions that may enhance collective security and prosperity within the region. That is, states may choose to support common security needs rather than pursue actions that seek to diminish, divide, or coerce. Notwithstanding future developments, the primary limiting factors for peace, security, and stability at present overwhelmingly remain the diverging interests and temperaments among great powers seeking to alter the status quo and the ongoing conduct of relations between them.

Patrick McLaren has a background in mathematics and currently works in management in the tech industry. He is a graduate student at Harvard Extension studying International Relations & Security.