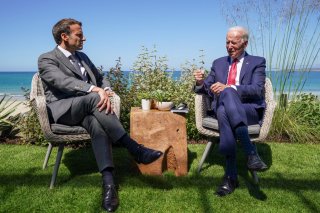 Smiling at the cameras, French president Emmanuel Macron gave a warm welcome to President Joe Biden for their first in-person meeting on the margins of the G7 summit in Carbis Bay, England. “It’s great to have a U.S. President part of the club and very willing to cooperate,” Macron said. The atmosphere will likely be very different when both leaders meet on the sidelines of the G20 in Rome at the end of October. France and the United States have experienced a major diplomatic crisis following the announcement of the AUKUS security partnership between Washington, Canberra, and London.

Yet, both countries seem willing to turn the page and move forward. After weeks of intense bilateral consultations, both leaders are expected to agree on “concrete measures” to increase cooperation on shared challenges such as Indo-Pacific security, counterterrorism in the Sahel, and European security and defense. But it would be a mistake to view this diplomatic rift as only a bilateral matter between Paris and Washington. What is actually at stake is the ability of the United States and Europe to finally create the conditions necessary for a stronger partnership after years of misunderstandings.

The recent diplomatic row between Paris and Washington was more than just a dispute over the loss of a lucrative submarine contract. France reacted strongly, most notably by recalling its ambassador to the United States for the first time in history. French authorities have seen the Biden administration’s lack of transparency and genuine consultation as a “breach of trust” with broader implications for the transatlantic alliance as a whole.

By excluding a major European ally from a crucial partnership with Australia, Washington also questioned, unintentionally or not, Europe’s value in its strategic competition with China. Through the AUKUS partnership, the Biden administration de facto decided to prioritize its strategic interests over those of one of its closest European partners. Coincidently, and by contrast, the European Union released its first strategy for the Indo-Pacific the day after AUKUS was announced. The strategy document confirmed the EU’s desire to “deepen its engagement with” Australia, the United Kingdom, and the United States.

Seeing the diplomatic feud over AUKUS as an isolated incident would be a mistake. This is just the latest manifestation of a structural reorientation in U.S. foreign policy that began under the Obama administration. For more than ten years, U.S. administrations have made it clear that their new priority is the long-haul competition with China and that Europeans must take greater responsibility for their own security. While reaffirming America’s “ironclad commitment” to the transatlantic alliance, Biden has also stressed that his unparalleled priority is strategic competition with Beijing.

Europe has not been unresponsive to these changes. In reaction to U.S. calls for greater burden-sharing, Europeans have stepped up efforts to boost their defense, especially amid a deteriorating security environment, Russian aggression, and terrorist attacks on European soil. Defense budgets are on the rise. Initiatives have been launched to foster collaborative armament projects and strengthen collective operational readiness. Europeans have beefed up their military engagement in their neighborhood, particularly in the Sahel. Concerned by China’s growing assertiveness, the EU has diversified and strengthened its Indo-Pacific partnerships through engagement with Japan, India, and the Association of Southeast Asian Nations (ASEAN).

These promising steps have nonetheless been hampered by political divisions among Europeans about what their ultimate objective is. Many European countries have expressed fears that developing a more autonomous Europe could ultimately weaken NATO and Europe’s ties with the United States. Washington’s persistent ambivalence toward the overall concept of European strategic autonomy has also contributed to these doubts. Every “wake-up call” has therefore resulted in limited progress toward building a strong and capable Europe.

This situation is unsatisfactory for both Europe and the United States. By failing to be ambitious enough, Europeans risk being unprepared to protect their interests without U.S. support, as recently experienced with the fall of Kabul. Without the critical support provided by the United States, and given the challenging timeframe chosen by Washington, Europeans quickly came to the conclusion that maintaining their presence in Afghanistan was impossible. As the United States is contemplating withdrawing its combat forces from Iraq by the end of the year, Europeans may face a similar conundrum.

This situation is also not in Washington’s interests. The lack of lasting progress in Europe could complicate U.S. efforts to focus on China. In the event of a major upheaval in Europe, Washington will have little political choice but to assist Europeans. More importantly, by marginalizing Europeans in its Indo-Pacific strategy, the Biden administration risks losing a key partner in the broader competition with Beijing. Europe can make vital contributions by serving as a counterweight and providing alternatives to Chinese investments and technology. Even on hard security issues, some European countries have strong cards to play. In particular, France has a long-standing presence in the Indo-Pacific and maintains a permanent military force of 7,000 personnel in its overseas territories. The French Navy recently stepped up its engagement in the region by deploying an aircraft carrier and an attack submarine in the Indo-Pacific.

Instead of quickly turning the page on this diplomatic dispute between Washington and Paris, both Europe and the United States should seize this opportunity to build a more balanced and sustainable partnership. The joint statement released by Macron and Biden is promising in that regard. Both leaders agreed that stronger cooperation between both sides of the Atlantic was required in the Indo-Pacific region and in the fight against terrorism. A dedicated high-level dialogue between the EU and the United States on the Indo-Pacific has already been announced and should take place by the end of the year. Such a dialogue is much needed, as France has made it clear that implementing the EU strategy will be a priority during its rotating presidency of the EU in the first half of 2022.

Biden also recognized “the importance of a stronger and more capable European defense, that contributes positively to transatlantic and global security and is complementary to NATO.” This is a welcome signal that could facilitate European internal debates and therefore spur ongoing defense efforts among Europeans. Such strong and clear political support from Washington is particularly important as the EU and NATO are in the midst of redefining their missions, with the EU adopting its first white book, also known as the Strategic Compass, and NATO updating its Strategic Concept. Far from being the end of the story, the meeting between Macron and Biden should therefore be seen as a milestone in a larger process aimed at rebalancing the transatlantic relationship. However, Europe and the United States should be careful not to miss this opportunity. The cost of inaction will only increase over time.

Pierre Morcos is a visiting fellow in the Europe, Russia, and Eurasia Program, and a French diplomat in residence, at the Center for Strategic and International Studies in Washington. Views expressed in this article are strictly personal. You can find him on Twitter at @morcos_pierre.