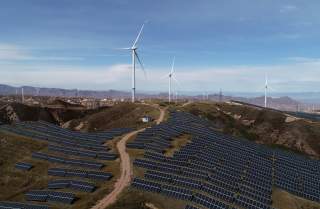 The future of U.S.-China economic relations in the age of climate change won’t be marked by competition or cooperation. Instead, the two powers could enter a period of what Professor David Hart of the Schar Center at George Mason University calls “coop-etition,” as both sides seek to lead the world’s technological transition away from carbon-intensive sources of energy.

Hart and Saunders broadly agreed that technological innovation will be a key piece of U.S. policy in response to climate change, just as it has been a focus of Chinese policy. And both agreed that this innovation has been taking place in an environment of both cooperation and competition between the United States and China. However, in the future, Saunders believes that the relationship will tilt towards competition over cooperation.

“We’re in an era of competition between great powers, particularly the United States and China,” he stated. “It may not have been necessary for it to become quite as competitive as it is quite as quickly as it did, but from my perspective that is water under the bridge.”

“When people say energy, they’re often talking about just oil and gas, but I have something much broader in mind here,” Saunders added. He averred that the United States needs a coordinated Federal policy to develop cheap new energy sources. And he forecast a more favorable political environment to these policies today, partly because “competition with China is increasingly shaping how members of Congress think.” He noted, “When Marco Rubio is advocating an industrial policy for the United States of America, you know that something in the Republican Party has changed.”

Hart contended that it would be a mistake to try and wage a cold war against Beijing. Instead, climate change is a problem where “every molecule of carbon dioxide” produced anywhere in the world hurts all of humanity, but the benefits from technologies to solve it will accrue in individual countries. “Some of this knowledge is going to be turned into profit opportunities. That’s the only way we’re going to scale the response to climate change quickly enough.”

However, Hart warned that Chinese government subsidies could create an effect of “technological lock-in,” flooding the global market with cheap sources of energy and stifling the incentives for companies in wealthy countries to innovate further. He pointed to the heavily-subsidized development of solar panels in China, which “destroyed” the capacity of “not only the United States, but the whole rest of the world.”

Saunders stressed that the significance of a new era of great power conflict cannot be downplayed. In his view, “The confrontational side prevents you from developing the cooperation that you need, and the cooperation that you want prevents you from being able to confront when you need to.” He added, “As a practical matter, in terms of bipartisan consensus, it’s easier to make an energy policy that has beneficial climate effects” than “trying to use climate policy to make energy policy. What we need out of diplomacy is not so much targets and timetables, but policies that reduce the friction” around deploying new energy technologies.

Professor Michael Vlahos of the Johns Hopkins University opened questions from the audience by asking about the damaging effects of political polarization and complaining of “Stalinist overtones” in a recent left-wing proposal to deal with climate change.

“To me, the more worrisome thing is declaring it to be a crisis and claiming that we have to solve it in ten years,” Hart responded. He said that climate change is a “chronic condition” like diabetes that can only be mitigated, not abolished.

“On the other side, there’s a complete denial of the science,” he complained, referring to many Republicans’ refusal to acknowledge the role of burning fossil fuels in intensifying climate change. However, Hart said that there are some encouraging signs among some Republicans, mentioning his recent meeting with Sen. Lisa Murkowski (R-AL.).

“On this question of the denial of the science, I have a somewhat different view,” Saunders responded. “If they enter into a debate on what is the best policy solution on dealing with that issue, up until now, it’s a debate they would lose, because they don’t actually have an answer,” making it easier to simply deny that climate change is a problem. I suspect, but have little data to support, that members of Congress are going home to their states and districts and are hearing from their constituents about real-world impacts that people are feeling,” he added. But “if Democrats insist on a public apology, then forget it.”

But the United States is not the only country facing internal problems moving forwards. “China, if it continues to grow, will have real difficulties meeting its energy needs, and it will always be vulnerable because of the lines of communication it needs,” said former Ambassador J. Stapleton Roy, particularly referring to China’s significant oil imports from the Middle East. In addition, Roy, who is a distinguished scholar at the Wilson Center’s Kissinger Institute on China and the United States, pointed to massive environmental problems that are impeding China’s ability to exploit energy derived from coal.

Others focused on the Trump administration. “This administration has proclaimed a policy or a strategy of energy dominance. What, in your view, does that mean? Is that just a bumper sticker, or is there any content?” asked Richard Burt, a former U.S. Ambassador to Germany and chief negotiator of the Strategic Arms Reduction Treaty.

“To the extent to which there is a policy,” Hart responded, it’s about exporting liquid natural gas to Europe and expanding U.S. oil production to build leverage over the world market. “It could be developed by a future Rubio administration,” he quipped.

Ambassador Burt also asked why Europeans seem much more eager to confront climate change than Americans. Saunders said that European societies tend to be more “socially-oriented,” and that the prospects of climate-driven migration from Africa and the Middle East drove “European right-of-center parties” to confront climate change much earlier. Hart concurred, but said that rather than portraying the European right as particularly advanced, he would call the American right particularly slow to accept the science.

George Beebe, Vice President and Director of Studies at the Center for the National Interest, brought up the potential “implications for China’s dominance of access to the world’s supply of…rare earth materials” used in electronics and solar panels.

“We haven’t really put our minds to it in the United States, and it’s an opportunity for more conservative foreign policy thinkers to push the United States in this direction,” Hart responded, cautioning that “[i]t’s a different set of concerns than petroleum because these materials are used in small quantities.”

“There have been, historically, mines in the United States, producing these materials. Now they’re not, because it isn’t economical,” Saunders added. “When you’re thinking about national security, economics becomes a secondary consideration.”

Dimitri K. Simes, President of the Center for the National Interest, noted that with American energy independence, the growing tensions in the Persian Gulf have not led to increased oil prices until now. But he asked if this situation will remain the case if the crisis deepens. Even though the United States can blunt the impact of Middle Eastern oil producers on world markets, Saunders responded, “the U.S. is not producing enough oil and gas to support the global economy if the Persian Gulf is shut down.” He added that U.S. efforts to keep the Chinese tech giant Huawei away from American allies’ information infrastructure could create “technology blocs,” proposing a “much stronger technology component to many of our alliances.”