The U.S. Economy Might Not Be a Train Wreck After All 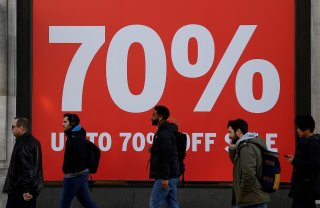 Just a glance at the spring quarter’s GDP report could have turned dark hair white. According to the Commerce Department’s Bureau of Economic Analysis (BEA), the aggregate output of this economy, after falling at a 5 percent annual rate in real terms during the first quarter, plummeted at a 32.9 percent annual rate during the second, a record and by a wide margin. Collapse described every major sector. Consumer spending, more than two-thirds of all economic activity, fell at a 34.6 percent annual rate for the quarter, capital spending fell at a 27 percent rate, and residential construction at a 38.7 percent rate. These frightening figures describe an economy seemingly on the verge of disappearing.

The report certainly brings home the cost to America of coronavirus lockdowns and quarantines, however otherwise necessary they may have been. But these statistics say very little about the future or even the state of the economy as July turns to August. On this score, the more recent and robust May-June economic response to re-opening efforts are much more relevant and much more encouraging.

Before parsing the averages, it might offer perspective on this horrible second-quarter news to note the BEA’s preference for stating growth at annualized rates. The BEA does this because presenting all percent changes as if they persisted for a year makes for easy comparisons between growth rates that span different periods of time. When looking at quarterly numbers, however, as this GDP report does, this practice of annualizing the rates also makes the numbers larger, in this case frighteningly so. Thus the annualized real GDP drop of 32.9 percent for the second quarter amounts to a quarterly drop of about 9.5 percent. The same modifications apply to all the figures quoted above. Of course, a quarterly drop of nearly 10 percent is still scary, but it nonetheless looks much more surmountable than the much larger annualized figure.

A more critical point of perspective is to recognize that all data are by nature backward-looking. That is especially so of this batch for the second quarter. Because the BEA measures growth from the average of one quarter to the average of the next, these figures say more about the economic hole in which the economy began the spring quarter than about what is happening in the economy now, much less in the future.

A look at monthly data where it exists illustrates the biases involved. (Apologies. This will get unavoidably technical.) Take retail sales, a big part of the economy. These entered the year growing at a reasonable pace. But in March, as the quarantines and lockdowns began to go into place, they plummeted 18.2 percent. At that point, retail activity was already some 6 percent below the average of the first quarter. That was where the spring quarter began. With coronavirus strictures fully in place, April sales fell an additional 14.7 percent, putting them some 20 percent below the average level of sales in the first quarter. (Bowing to the BEA preference for annualized rates, that shortfall would have all but whipped out all retail sales across America if it persisted for a year.) Starting in this deep hole, even May’s impressive 18.2 percent monthly growth rate and June’s 7.5 percent monthly growth could not lift the level of sales averaged over the entire second quarter (including the horrible month of April) even close to the first quarter figure (which included the relatively strong sales of January and February.) The same pattern holds for other sectors of the economy as well.

Assimilating such statistical relationships is a chore for anyone, but especially for those who can largely avoid dealing with percent growth rates and quarterly averages. Perhaps it will help to think of the pattern as the first six days of a hike down into the Grand Canyon and back out. (I have never done this, so my description may not be realistic.) The first three days (January through March) is one of first gradual and then steeper descent. At camp on the evening of the third day, the climbing team is considerably lower than it began or the elevation it averaged for the first three days of the expedition, especially because the drop during the first two days was gradual. The team makes a steep descent to the canyon floor on the fourth day (April). There it is well below the average altitude of its first three days out.  On days five and six (May and June) the team climbs steadily. In camp on the sixth-day, it is well above the canyon floor and above where it camped at the end of its third day, but still not high enough to overtake average altitude of the first three days. But the important thing about the state of the expedition is not how it compares with days past but rather that it is on the ascent.

So it is with this economy. The ascent of May and June has set the tone of the present and the path for the future. This information not only is nearer in time, but it at once reflects the effect of re-openings and excludes the worst artificial effects of the lockdowns and quarantines. To be sure, the pace of growth exhibited in May and June – by retail sales, residential construction and other sectors of the economy – will slow.  A pent-up demand swelled growth rates during these first two months of lifting strictures, but that recovery is more significant to the future than are the averages are drawn from a distorted past, dramatic as they look in either tabular, graphic, or narrative form.

There is reason to expect another economic boost in the coming months.  Businesses need to replenish the inventories that ran down during the emergency. Because the virus and the coronavirus strictures interrupted supply chains, what few sales did occur during the emergency and especially in May and June exhausted inventories. BEA reports that inventory stocks dropped by almost $380 billion during the first six months of the year. That is almost 2 percent of the entire economy. Inventory declines counted against growth calculations especially in the spring quarter.  Replenishing those inventories, which business will certainly do in the face of rising sales, will also enhance future growth rates.

Of course, the encouraging pattern that emerged in May and June could face a headwind if rising infections force a return of anti-virus strictures. (Even if rising infections do not justify a return of strictures, there is a risk that governors, drunk with the power they have had during the emergency, will refuse to get out of the way of their state economies.)  Barring such events, the pattern of recovery clearly already set in motion should bring a striking third-quarter growth when it is reported late in October. Its persistence, more than any backward-looking news, no matter how ugly, is the key to the economy going forward.

Milton Ezrati is a contributing editor at The National Interest, an affiliate of the Center for the Study of Human Capital at the University at Buffalo (SUNY), and chief economist for Vested, New York-based communications firm. His latest book is Thirty Tomorrows: The Next Three Decades of Globalization, Demographics, and How We Will Live.