The U.S. Immigration System Is a Dehumanizing Mess 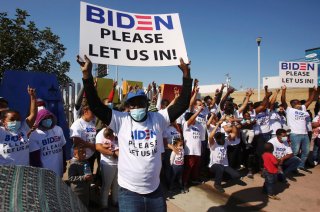 The awful sound of crashing metal and screeching tires shattered the morning calm on a two-lane highway near the U.S.-Mexico border. As the dust settled, bodies littered the road beneath the sun. Some passengers tried to crawl out from a ruined 1997 Ford Expedition, crushed against a tractor-trailer, while others wandered through nearby fields.

This was the scene in Holtville, California, on March 2, when an SUV carrying twenty-five Mexican nationals collided with a semi-truck. The crash left thirteen dead. They ranged in age from fifteen to fifty-three, male and female. Customs and Border Protection sources told reporters that the incident happened after someone cut an opening in the border fence near Calexico. Authorities suspect human trafficking played a part in the fatal wreck.

Now and then, an incident like this highlights that there is something fundamentally wrong with our immigration system. Out of incompetence, corruption, and expediency, both parties have failed to establish the kind of long-term, structural changes needed to protect the dignity and safety of foreign nationals and American citizens alike. Thus far, President Joe Biden seems intent on exacerbating the problem.

Former President Donald Trump attempted to effect change in the system Biden now oversees. But his agenda suffered setbacks due to poor personnel choices and a lack of institutional knowledge. For example, following Kirstjen Nielsen’s departure as Homeland Security Secretary, Trump appointed Chad Wolf to lead the agency. Wolf, a former immigration lobbyist, neglected to push for more funding to complete the border wall, used his discretionary powers to approve thousands of extra worker visas during the pandemic, and funded sanctuary cities that stand in defiance of federal immigration law.

Biden, by contrast, chose Alejandro Mayorkas to run the Department of Homeland Security. Mayorkas is a nationally recognized lawyer who oversaw the implementation of the Deferred Action for Childhood Arrivals initiative in just sixty days under the Obama administration. His appointment sent a clear message: what little Trump accomplished will be erased.

On Jan. 20, Biden’s DHS announced a one-hundred-day pause on deportations for some illegal aliens and an end to the Trump administration’s “Remain in Mexico” protocol, under which asylum seekers attempting to enter the United States had to wait in Mexico for their American court hearings. The policy disincentivized a common illegal immigration tactic: applicants enter the United States seeking asylum, disappear into the country, and never show up for court. Justice Department data show about half of the migrants who are not in custody miss their court hearings.

Although a federal judge indefinitely blocked the enforcement of the one-hundred-day moratorium on most deportations, changes to the asylum process, the promise of a massive amnesty, and a generally soft stance on immigration have triggered a series of related crises bearing Biden's name. This week, about a hundred foreign nationals from Mexico, Central America, Haiti, and Cuba protested near the California-Mexico border wearing shirts reading, “Biden, please let us in!” And that’s just the start.

Border activists reported hundreds of migrants being released after crossing near the border in San Ysidro, California. In Yuma, Arizona, where shelters are already near capacity with homeless residents, Border Patrol recently released 350 migrants. Local officials worry the federal government could release thousands more by spring into the small border city. Mayor Douglas Nicholls told the Washington Examiner that Yuma does not have the resources or infrastructure to handle a humanitarian crisis. “So it needs a federal solution, not a Yuma solution,” he said.

“I am pleading and requesting with you to please put a halt to any measures regarding the release of immigrants awaiting court dates into the City of Del Rio and surrounding areas,” he said in a video uploaded to the city government’s YouTube channel. “We do not have the resources available to house and accommodate these migrants within our community.”

By early February, the New York Times had reported that at least one thousand migrants were allowed to cross into Texas alone. And though Biden is cautioning Gov. Greg Abbott against reopening the Lone Star State, even calling Abbott’s decision to end Texas’ mask mandate “Neanderthal thinking,” his administration is recklessly lax with migrants infected with the coronavirus. Border Patrol recently released more than one hundred illegal aliens in south Texas who tested positive for the virus.

Speaking to Noticias Telemundo Investiga, some migrants said they were tested at the border and allowed to travel around even if their results came back positive. Nineteen who tested positive in Brownsville, Texas, confessed they “plan to travel to dozens of cities throughout the country,” NBC News reported. A city spokesperson claimed Brownsville does not have the authority to stop them.

Mayorkas, like the rest of Biden’s team, insists everything is humming along smoothly. “If they come, if families come, if single adults come to the border, we are obligated to, in the service of public health, including the health of the very people who are thinking of coming, to impose to travel restrictions under the CDC's [Centers for Disease Control and Prevention] Title 42 authorities and return them to Mexico and we have done that,” Mayorkas said in a press briefing. “The fact of the matter is families and single adults are being returned under the COVID-19 restrictions.” There are hundreds of reasons walking freely about Texas to believe that’s not true.

Deceit and hypocrisy have proven features of the Biden administration.

On the 2020 campaign trail, Biden railed against Trump’s continuation of the child separation protocol on the border. The purpose of the policy is to protect children from unrelated adults masquerading as their parents in a bid to gain entry to the United States. Indeed, there is a market just for this purpose. In 2019, the San Diego Union-Tribune reported that single mothers in Tijuana shelters were approached by groups of men offering to buy their children to improve their chances of crossing the border. In some cases, children are essentially rented to enter the United States by adults posing as parents, then returned south to accompany another migrant. If parents aren't willing to sell or rent their children, then would-be border crossers are willing to abduct them all the same, as is increasingly common.

In fact, but in early 2020, a judge held that the Trump administration exercised that policy in a manner consistent with aliens’ “rights to family integrity.” Former President Barack Obama also enforced child separation, which Biden contritely called a “mistake” in 2020—one he is fine with perpetuating, it seems.

“We are not encouraging people to come,” White House press secretary Jen Psaki recently told reporters. “But we also believe differently from the past administration that we are not going to turn away kids who are under 18.” Psaki is right, the Biden administration isn’t turning them away or putting “kids in cages”—they’re doing “overflow facilities for migrant children” instead.

By law, Border Patrol must transfer unaccompanied migrant children into suitable Health and Human Services facilities within seventy-two hours. But the influx created by the administration’s signaling is such that in many cases, the delay in transfer exceeds the legal time limit, according to law enforcement sources. And though the White House is trying to play it cool, in a briefing for Biden on March 2, officials discretely called for a whopping “20,000 beds to shelter an expected crush of child migrants crossing the U.S.-Mexico border,” according to Axios. Information at the meeting showed DHS projects 117,000 unaccompanied children crossing the border this year. Still, a former senior Border Patrol agent told the Examiner’s Anna Giaritelli the already unprecedented 117,000 figure could be an “undercount.” Nevertheless, Mayorkas insists there is “no” crisis at the border.

The dance between the media and the Biden administration on whether there is a humanitarian crisis will likely continue for a while. The allied press will deny, like Mayorkas, until the day it becomes untenable. If that day comes, then Biden and his team will blame the previous administration—as every administration does—while browbeating Americans into acquiescing wave after wave of migrants. On the other hand, the opposing press insists, rightly, that the crisis has already come.

What is lost in this debate over humanitarianism is the fundamentally dehumanizing nature of the American immigration system.

In California, Latino children and children with immigrant, young, or single parents are much more likely to be poor. According to a 2017 report by The Education Trust-West, there is not a single county in Golden State where the majority of Latino students are proficient in math or English language arts. All this is to say nothing of the millions of impoverished white, black, and children of other backgrounds across the country. Yet, Americans are told their moral character is in question unless they support admitting more people we can’t feed or educate. Our policies create a mass proletariat in the name of “compassion.”

This Is How Immigration Fueled the Brexit Result