The U.S. Must Beat China at its Own Game in South China Sea 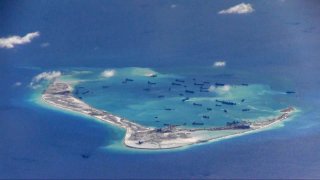 Mike Pompeo’s greatest legacy as Secretary of State may be as the first chief diplomat to stand up systematically to Chinese propaganda, Beijing’s underhandedness, the communist regime’s rampant theft of hundreds of billions of dollars’ worth of international property, and the country’s general flouting of international norms. Previous administrations may have had an occasional tough word for China, but few sustained them or moved beyond the rhetoric. China’s economic might, trade importance, and military potency gave prior administrations pause. All knew something needed to be done but, like those American officials who place hopes in Iranian reformists never mind that such a gamble has never paid off, they placed all their bets on the idea that China’s political moderation would follow its economic liberalization. They believed China would embrace the post-World War II liberal order rather than seek to defeat it.

Obfuscation about the origins of the COVID-19 crisis is a symptom of Chinese political culture, but it was a reactive response to a crisis rather than proactive strategy to foment one. The same cannot be said about China’s actions in the South China Sea where it is increasingly engaged in an unprecedented grab of maritime territory. If President Xi Jinping successfully fulfills his ambition to transform low-tide elevations and rocks into islands and claim not only a 12 nautical mile territorial sea around each one, but also a 200 nautical mile exclusive economic zone, the total territory China now seeks to control puts it on par with European powers’ nineteenth-century imperial grabs.

The historical and legal basis of the People’s Republic of China’s claims to the South China Sea are fantastical with no basis in history, international law, or geology. China roots its claims in the so-called “Nine-Dash Line” which first appeared on maps only in 1947; Chinese maps from centuries past, however, show no such claims. While Chinese officials also back Beijing’s claims by arguing that the areas included within the Nine-Dash Line were traditional Chinese fishing grounds, this argument is meaningless as Vietnamese, Filipinos, and Malaysian fishermen also plied the same waters historically.

Some diplomats bend over backwards to accommodate the narratives of those sitting across the table. History, however, is not so flexible. As part of the 1898 Treaty of Paris ending the Spanish-American War, Spain sold the Philippines to the United States for $20 million. Both Madrid and Washington considered Mischief Reef and Scarborough Shoal—the former occupied by China and the latter administered by it despite a Permanent Court of Arbitration ruling against Beijing--to be Filipino territory. Likewise, when the Philippines gained their full independence on July 4, 1946, they assumed control over both the Scarborough Shoal and Mischief Reef. Simply put—and as the arbitration ruling concluded—China has no valid legal or historic claims to either.

The same story continues across the South China Sea. The Center for Strategic and International Studies’ invaluable Asia Maritime Transparency Initiative publishes and analyzes open-source satellite imagery of the islands, rocks, and low-tide elevations which dot the South China Sea and show visually China’s ‘salami-slicing’ strategy of slowly transforming reefs and rocks into artificial islands and building military bases, anti-aircraft batteries, and surveillance stations on them.

While Pompeo’s willingness to take on Chinese propaganda is welcome, it is questionable whether winning in the court of public opinion will be enough to alter Chinese behavior. Diplomacy has value, but can only provide a solution when both sides approach it for the same purposes. For too long, however, China’s Ministry of Foreign Affairs has approached diplomacy as an asymmetric warfare strategy with which to tie opponents’ hands together while they advance their military position.

The United States sees the South China Sea as international waters and refuses to recognize the basin’s reefs and low-tide elevations as islands deserving of exclusive economic zones. Perhaps, however, it is time to make an exception.

China’s claims that the rocks, shoals, and reefs it illegally occupies are islands are discernably false.  One feature in the South China Sea, however, does meet the criteria to be an island. While its claim is disputed by China, Vietnam, and the Philippines, Taiwan possesses Itu Aba (Taiping Island), the largest land feature in the Spratley chain. Taiwan has long claimed that Itu Aba is an island deserving of its own exclusive economic zone although, in 2016, an arbitration panel convened at the Philippines' request found that Itu Aba was merely a rock deserving only of 12 nautical mile territorial waters. The ruling itself, however, was flawed. One of the major features of an island is that it possesses fresh water to sustain life. Residents on Itu Aba trap rainwater and so they do access enough freshwater and can support a meaningful economy. The 2016 ruling’s logic was likely convoluted and discarded precedent.

To beat China at its own game and better protect freedom of navigation, Secretary of State Mike Pompeo should recognize both Itu Aba’s status as an island and Taiwan’s claim it. Many detractors will suggest that China would point to such a move to justify its own island claims, but Beijing is doing so anyway. The difference between any potential U.S. recognition of Taiwan’s claim to Itu Aba and the various reefs and artificial islands that China now possesses is that Itu Aba has geology on its side. To recognize Itu Aba as an island is not to bless land reclamation on China-occupied features, but rather is simply to end neutrality on the matter which is counterproductive to a major U.S. ally.

U.S. officials might begin by visiting Itu Aba during tours of the region. Consider that a slice of salami: China will not risk war because a deputy assistant secretary of Defense spent an afternoon touring its airport, nature reserve, airport, or hospital. China often uses scientific missions to provide cover to its own military engineers. A second slice of salami would be the dispatch of parallel-group of American geologists, engineers, and marine biologists to the island. Perhaps Itu Aba could host an office of the American Institute of Taiwan to host them. A third slice would be the provision of radar and surface-to-air missiles to help defend the island from regional predators, something with which the aforementioned engineers might help. Ultimately, Taipei and Washington might celebrate their long history of strategic relations by scheduling port calls on the island. After all, Xi’s actions helped catapult COVID-19 from a localized outbreak into a global pandemic. Travel is difficult, but Itu Aba’s isolation makes it a perfect and safe rest-and-relaxation destination for the U.S. military.

To date, diplomacy has not worked to roll back China’s actions in the South China Sea, nor will it so long as China believes its salami-slicing works. Perhaps, then, to be effective and to signal support for allies and protect freedom of navigation, it is time for Washington to join Beijing for a salami-themed picnic.