The U.S. Navy Is Unbalanced. It's Time to Fix It. 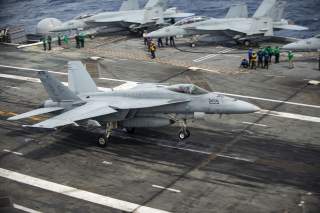 In the decades after the Cold War, the U.S. Navy absorbed sustained budget cuts resulting in large force reductions. The total size of the fleet dwindled from nearly 600 active ships in 1987 to around 285 today. During this period, naval planners focused their substantial, yet shrinking, budgetary resources on large, costly, high-end platforms such as aircraft carriers at the expense of smaller surface warfare combatants such as frigates. This approach perhaps suited the range of global expeditionary missions that the navy was called upon to support in the 1990s (e.g. Bosnia, Iraq, Kosovo), a time when the United States faced no proximate military competitors. However, its lack of platforms currently leaves the sea service in a parlous state as it faces intensifying major power competition from China and Russia. At a recent Center for the National Interest event, two leading authorities on naval strategy, operations and force structure, explained how the navy can take steps to create a more balanced force that will adequately prepare the fleet for a new era of great power naval competition.

According to Milan Vego, Professor of Operations at the U.S. Naval War College, “lack of understanding of naval theory” makes it difficult for the navy to develop “sound doctrine”, and as a result, to determine force requirements. For example, Vego notes that the navy has an ingrained offensive mindset, which contributes to neglect of the defensive elements of naval combat such as mine warfare and protecting maritime trade. At the strategic level, this conditions a preoccupation with sea control (offensive), as opposed to sea denial (defensive). However, per Vego, it is not inconceivable, especially as capable competitors emerge, that the U.S. Navy might be put on the defensive and forced to shift its focus from sea control to sea denial.

For example, if “Russia and China combined in the Western Pacific,” the U.S. Navy would probably be on the defensive, a position it has not occupied since the early days (1941–1942) of the Pacific War against Japan. The challenge is that the navy faces different, conceivable scenarios that could require it to implement sea control or sea denial strategies. This makes planning difficult, because, per Vego, “in thinking about what kind of ships you have, what number of ships you have is all based on whether you are going to conduct sea control or sea denial; what focus will be on protection of shipping versus attack on shipping.” Furthermore, the efficacy of naval strategic planning is hampered by “a lack of joint approach to warfare at sea” said Vego, citing a need for working with “the other services to help the navy carry out its missions.”

A repeated issue raised by both panelists is the imbalance in naval force structure between large, highly capable surface combatants, and smaller, cheaper platforms. This is the result of a series of budgetary and planning choices made in the two decades following the Cold War’s end. During this period, the “navy was satisfied to ride its Cold War inventory of ships and weapons down, always believing that it could turn the spigot back on in a crisis. It also believed that if it had limited dollars, it should strategically spend them on high-capability ships rather than maintaining the previous Cold War balance of small numbers of high-capability ships and a larger capacity of less capable ships” observed Jerry Hendrix, a retired U.S. Navy Captain and vice president with the Telemus Group, a national-security consultancy. With regards to surface warfare combatants, this approach fostered an emphasis on cruisers and destroyers, while frigates were eliminated entirely from the fleet.

The drastic reduction in ship numbers is only part of the navy’s current problem. According to Hendrix, the navy employs many of the same missiles (with the same ranges and lethality, albeit with improved targeting technology) that it has used for over three decades. Furthermore, Hendrix lamented that the retirement of longer-range carrier wing aircraft such as the F-14 Tomcat and S-3 Viking, has, since 1988, slashed the “average unrefueled range of the air wing . . . from 900 miles to just under 500 nautical miles.” The static range of the navy’s standoff munitions and reduced carrier wing range is particularly detrimental in the current strategic context. China and Russia have, notes Hendrix, “invested in a new generation of anti-access, air-denial weapons that have sought to push the U.S. and its allies farther from their shores, establishing sea-control from land, and redefining territorial sovereignty over the seas.” This combined with the limited ability of U.S. munitions and aircraft to strike targets in potential adversaries’ homelands, means that in the event of a naval conflict with China or Russia, the United States will face tremendous difficulty projecting conventional firepower ashore into the enemy’s homeland. As a result, the navy could be forced to fight a bloody battle at sea in order to get within range of its enemies (the closest historical analogy would be World War II in the Pacific where the United States fought ferociously to acquire territory from which its long-range bombers could strike the Japanese homeland).

China and Russia have been so successful at creating anti-access, area denial bubbles that it has forced the U.S. Navy to alter how it thinks about the nature of sea warfare. According to Hendrix, naval strategic thought has shifted from focusing on “power projection and sea control to an ephemeral concept called ‘distributed lethality,’ which roughly equates to a long campaign of attrition at sea rather than short power projection campaigns that had characterized modern strategic planning.”

A major issue in re-orienting the force around distributed lethality, which calls for dispersing combat firepower across a host of platforms, is the shortage of ships in the navy. As Vego observes, the current “battle force is unbalanced” lacking “less capable, less costly platforms.” Hendrix too, calls for a “series of investments” that re-establish a “high-low mix in our day-to-day force with an emphasis on the new frigate to [undertake the role] to preserve the peace presence, and submarines to provide penetrating, high-end power projection.” The current unbalanced force structure could put the navy at a disadvantage in a conflict with China or Russia. “The need for smaller ships is always shown in any major conflict. That does not change. If you have to protect maritime trade for example, you need smaller ships, you need frigates and corvettes,” said Vego. Unfortunately, he observed, due to the potentially, short, intense, contracted nature of modern naval warfare, the United States will probably lack the luxury, which it enjoyed in World War II, of having time to retool its industrial base to build up an armada of smaller combatants.

In addition to building frigates again (Hendrix calls for upping the current U.S. inventory from zero to between fifty to seventy hulls) and scaling up submarine production, the navy should be investing in “unmanned aerial, surface, and subsurface platforms” that can enhance the range and accuracy of naval weaponry. Finally, the navy requires a new generation of weapons that have “increased range, speed and lethality” and to ensure that surface warfare ships are capable of mounting these platforms.

In recent years, increasing the fleet to 355 ships has become something of a totemic target for American navalists, who argue that the failure to make the right investments will result in the diminution, or even, elimination, of American naval preeminence. While 355 ships is no panacea, a move in that direction stemming from an increase both in ship numbers, and from restoring a more balanced mix between high and lower end surface combatants across the fleet, would certainly constitute a move in the right direction. As leading proponents of American sea power, such as former Virginia congressman Randy Forbes, have emphasized repeatedly, the purpose of naval preeminence is not ultimately to wage war, but to ensure the free flow of trade and commerce, safeguard the rule of law across the maritime commons, and most critically, to preserve peace through strength.