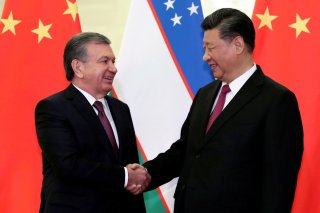 The China-led regional bloc, Shanghai Cooperation Organization (SCO), will be holding its twenty-second summit on September 15-16 in Uzbekistan’s ancient city of Samarkand. Russian president Vladimir Putin and Chinese leader Xi Jinping will be attending and are expected to have a key bilateral meeting at a time when the Kremlin’s war rages on in Ukraine and Beijing is exhibiting aggressive moves towards Taiwan. Washington better pay heed as its two principal adversaries are trying to consolidate their dominance in the heart of Eurasia.

By hosting the SCO summit, Uzbekistan underscores its coming of age: it is to play a lead role in convening nations, which account for about half of the global population, 60 percent of the Eurasian landmass, and a quarter of the world’s GDP. Fifteen regional leaders will be attending the gathering including Turkish president Recep Tayyip Erdogan; Indian prime minister Narendra Modi; Pakistani premier Shehbaz Sharif; and Iranian president Ebrahim Raisi, whose country is to be inducted as a full SCO member.

Situated at the crossroads of Eurasia, Uzbekistan is trying to navigate amidst great power competition, a strategic environment in extreme flux while the country is going through a crucial period in its own social, political, and economic development. It is important to appreciate the major strides that the Central Asian nation has made, especially in the last six years. China and Russia certainly recognize the country’s importance, and the United States cannot afford to leave Uzbekistan to the mercy of its two primary adversaries.

Uzbekistan’s President Shavkat Mirziyoyev himself described his country’s chairmanship of the SCO at a time of immense change and unpredictability in the world—an era of “historical fracture”—exacerbating “geopolitical confrontation.” Mirziyoyev also pointed out that the summit was taking place in a city that has been historically at the crossroads of civilizations. The gorgeous urban center is seeking to be the venue for a global conversation on how to steer the world away from conflict and towards cooperation. Mirziyoyev emphasized the need for regional connectivity between Central and South Asia.

Uzbekistan has come a long way since the current president in the fall of 2016 succeeded Islam Karimov, who presided over a highly authoritarian regime that kept the country isolated from the world.

Under Mirziyoyev, Uzbekistan—a country of 35 million, the largest by population in Central Asia with far fewer resources than other countries in the region—has transitioned from a post-Soviet autocracy to a pre-democratic state engaged in a careful but risky reform strategy. Particularly noteworthy have been his moves to open up public space for religion in civil society and extension of an olive branch out to Islamist extremists interested in returning to the national mainstream. This strategy is being tested since the Taliban’s return to power in neighboring Afghanistan last year, though Tashkent has maintained a pragmatic approach to dealing with the Taliban. On a broader scale, Mirziyoyev is engaged in a difficult balancing act between instituting political reforms and safeguarding regime stability via changes to the constitution, especially after securing a second presidential term.

Complicating these domestic changes is the fact that the Uzbeks are having to pursue them at a time of great geopolitical upheaval in their strategic environment. This would explain why Tashkent has been keen on assuming a leadership role in regional and international affairs. Taking on a lead role in the SCO is a way for the Uzbeks to continue the cautious path towards political and economic transformation while living in a neighborhood influenced by anti-democratic powers such as Russia and China.

Uzbekistan’s choices remain highly limited when the United States and the broader West do not have much of a presence in the heart of Eurasia. Washington and its allies must realize that Uzbekistan, which borders all the other four Central Asian neighbors, is the pivot of the region. Simply put, it is subject to varying centripetal forces. China and Russia have no interest in its reform efforts; in fact, they would prefer not to see the country make progress on that front. If the United States is to ensure that Uzbekistan has a soft landing in its reform and development journey and becomes a trusted partner, then it must help the Uzbek state and society build resilience and pursue a robust and independent multilateral foreign policy.

Kamran Bokhari is the director of Analytical Development at the New Lines Institute for Strategy & Policy in Washington and a national-security and foreign-policy specialist at the University of Ottawa’s Professional Development Institute.