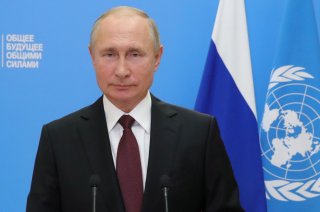 Russian president Vladimir Putin did not quite deliver the address he expected he would at the September United Nations General Assembly meeting—in fact, he wasn't even physically present at Turtle Bay! This is a far cry from his stated plans, whereby 2020 would serve as a triumphant milestone for Russia, celebrating the seventy-fifth anniversary of Moscow's role in defeating the Nazi menace and in creating the postwar international system—and where Putin, arriving in New York, would bring the other four permanent members of the Security Council to hold a global summit. The coronavirus pandemic upended those plans—but echoes of these aspirations remained in the text Putin delivered from the Kremlin. Nevertheless, the speech remains important for understanding Putin's state of mind as he considers the global system and the role he expects Russia to play in the 2020s—as well as the implicit warnings to the United States.

Putin has always stressed the desirability of a “concert of great powers” system to manage world affairs, and he reiterated his vision of the United Nations and especially its Security Council as such a forum. Properly utilized, “it helps prevent unilateral actions that may result in a direct military confrontation between major states, and provides an opportunity to seek compromise or at least avoid solutions that would be completely unacceptable to others ...” Beyond the United Nations and its “G5” (China, France, Russia, the United Kingdom and the United States), Putin also gave a “shout-out” to the G20, whose presidency is currently held by his sometime partner in international energy price regulation, Saudi Arabia, and its crown prince, Mohammed bin Salman. What is interesting, of course, is that these are the two bodies Putin feels should take the lead in managing international affairs—both of which include Russia and in which the United States cannot dominate the agenda or the solutions.

What is more striking, however, is Putin's implicit proposal—to the Europeans and to the major powers of the global South—to avoid becoming involved in any emerging U.S.-China cold war. His proposals for secure, sanctions-free trade corridors, his resurrection of the idea of a greater Eurasian partnership, and for placing limits on cyberwar and other disruptive actions which could upset international trade and prosperity (including the U.S. use of sanctions), are all designed to create a role for Russia as the de facto head of a new non-aligned bloc of states that do not want to be forced to either choose between Washington or Beijing—or to have to accept American or Chinese agendas. This speech follows the pattern that has been observed in how Russia has been diplomatically using its supposed Sputnik-V coronavirus vaccine (which Putin specifically mentioned) to reach out to a group of middle powers balancing between East and West.

Putin seems to be hoping that the growing ascendancy of China hawks in both parties in the United States will create concerns—even among U.S. allies—about being drawn into a Washington-Beijing Cold War, and that they, in turn, will buy into Russian proposals—and be incentivized to keep Russian economic power intact rather than accede to U.S. sanctions pressures. And if a second-term Trump or first-term Biden administration is less inclined to bargain and compromise with Russia—including the all-important proviso to accept Russia's own self-definitions of “sovereign democracy”—then Russia can take steps to raise costs for the United States, or be less inclined to do things that serve American interests.

Of course, Putin has made these statements before and has never found enthusiastic takers. Neither Donald Trump nor Joe Biden, but also Xi Jinping as well, seem that interested in transitioning to a true “concert of powers” system, while European leaders, dismayed both by Chinese and Russian actions over the last year, seem interested in strengthening the bonds of the “democratic community” rather than joining with Russia to balance both Washington and Beijing. We'll see if any of these proposals have any legs when Saudi Arabia hosts the G20 summit in November.