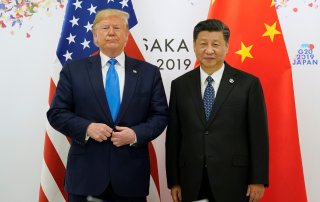 For America to defeat the coronavirus and return to a version of life as it was before this nightmare, should we identify China as an adversary against whom to mobilize? Or alternatively, must we recognize it as a partner whose cooperation is essential for our own victory? While the consensus in Washington has moved sharply toward defining China as part of the problem, the fact is that we cannot succeed in this war against coronavirus without making China part of the solution.

The increasingly ruthless rivalry between the U.S. and China will be a defining feature of their relations as far as any eye can see. This is an inescapable consequence of structural realities: however anyone tries to disguise or deny it, a rapidly rising China really is threatening to displace the U.S. from our position at the top of every pecking order.  The question is whether despite this reality, when confronting specific threats neither can defeat by itself, statesmen can be wise enough to find ways for rivals to simultaneously be partners.

Viruses carry no passports, have no ideology, and respect no borders. When droplets from an infected patient who sneezes are inhaled by a healthy individual, the biological impact is essentially identical whether the person is American, Italian, or Chinese. When an outbreak becomes a pandemic infecting citizens around the world, since no nation can hermetically seal its borders, every country is at risk. The inescapable fact is that all 7.7 billion people alive today inhabit one small planet Earth. As President Kennedy noted in explaining the necessity for coexistence with the Soviet Union in facing mutual, existential nuclear danger: “We all breathe the same air. We all cherish our children's future. And we are all mortal.”

When a crisis strikes, the first question many ask is: Who is to be blamed?

If central casting were searching for a villain, China is fit for the role. Where did the coronavirus first appear? In China. Who failed to nip the crisis in the bud? Chinese authoritarianism has displayed all its ugly features in suppressing initial reports, delaying transmission of bad news to superiors, and dissembling. Despite the Chinese government’s best efforts to re-write the narrative, it cannot disguise the fact that there is much in this case for which China deserves blame.

But the effort by many in Washington as well as the Blob to make this the primary storyline is escapist—an attempt to duck responsibilities for their own failures. President Trump insists on calling the pathogen the “Chinese virus.” A leading Republican Senator fed social media conspiracy theorists by suggesting that the virus had escaped from a Chinese bio-weapons lab.

Adults should move on. The urgent challenge America faces in attempting to defeat coronavirus is not China. It is our own failures to mobilize a response proportionate to the threat. How many weeks after countries like Singapore and South Korea began implementing emergency measures did the U.S. government remain in denial?  Who failed to prepare for the next pathogen after we saw earlier versions of this movie with the MERS outbreak in 2012, Swine Flu in 2009, and SARS in 2003? In a world where South Korea began testing 10,000 citizens a day within weeks of patient zero—and can now do 20,000 a day—who is still floundering with one excuse after another?

To be clear, to insist that we face ugly facts about our own failures, and recognize others’ successes, is not to imply any moral equivalence. Like most Americans, as a matter of faith we begin with the conviction that American democracy is basically good, and China’s Party-led authoritarianism that denies its citizens certain rights we believe are their endowments from the Creator bad.

But brute facts are hard to deny. After a month of costly delay, on January 20 China’s government publicly recognized the threat, announcing that the virus could pass from human to human. Two weeks earlier, it had informed the WHO about the illness, sequenced the genome, and posted that online so that scientists around the world could begin the search for a vaccine. (A Boston-based company, Moderna, heard the call and in less than two months created a vaccine that has now entered the U.S. government’s testing labyrinth.)

Once it recognized the threat and its paramount leader declared the epidemic “a crisis and big test,” on January 21 China mounted the most aggressive war on a virus the world has ever seen. This included locking down Wuhan, a city of 10 million where the virus first appeared. Days later, China drew a cordon sanitaire around the population of more than 50 million people in the province of Hubei. It installed mandatory testing checkpoints around the city in residential neighborhoods and public transit points; converted hotels, stadiums, and schools into makeshift medical centers; flooded the city with thousands of construction workers along with cement mixers and trucks to build new hospitals from the ground up at astonishing speed (one 1,000-bed hospital was built in 10 days); and mobilized tens of thousands of PLA personnel to distribute medical supplies and manage operations.

Announcements from the Chinese government can never be taken at face value. Its government has manipulated data and even the criteria for what counts as a new case. Unquestionably, Beijing’s spinners have been hard at work attempting to shape a narrative that disguises their failures in the first phase of this undertaking. A Deputy Spokesman for China’s Foreign Ministry has had the audacity to puff a propagandized conspiracy theory that the U.S. Army introduced the virus. But despite this noise, at this point, the evidence from all sources suggests that these efforts have actually succeeded in bending the curve of infections toward zero. American retailers including Apple, Starbucks, and McDonalds are now open for business in China.

The imperative for the U.S. today is to do everything possible to stop coronavirus from infecting millions of our fellow citizens, killing hundreds of thousands, and crushing our society. If medical scientists in China are able to develop anti-viral drugs that mitigate the impact on the infected, should Americans import them? Imagine that in the next month or two Chinese scientists invent a vaccine while American authorities insist they will not have one approved for well over a year. Once it has been demonstrated to be effective in Singapore or South Korea, would the reader wait for our FDA?

Given the chorus of cries from hospitals across the US and first-line responders for N-95 masks, if China were prepared to send millions of masks to the US, as it did to Italy recently, should Americans welcome them? If lessons China has learned in creating a diagnostic funnel—begin with pervasive taking of temperatures, subjecting those with fevers to a CT scan, and if an individual is still suspect taking a swab that is then analyzed before declaring someone infected—have proved effective, should we refuse to learn from that experience because of its origin?

But we should harbor no illusions. At the same time defeat of this pandemic underlines a vital national interest neither the US nor China can secure without the cooperation of the other, the performance—and non-performance—of the two nations will have profound consequences for the larger rivalry for leadership. From economic growth over the next 12 months, to its citizens’ confidence in their government, and each nation's standing around the world, successes and failures in meeting a test that has captured the global mind will matter hugely.

Unfortunately, most of the commentary about this aspect of the crisis has been mesmerized by China’s effort to manipulate the narrative. Of course, China is vigorously selling its storyline and shading facts to show itself in the best light. But preoccupation with the “narrative war” that focuses on words rather than deeds misses the mountain behind the molehill.

In real wars, dead bodies count. In economics, real growth produces more stuff. In relations with other nations, the arrival of much-needed medical equipment for which others are desperate drowns out any words.

Today, financial markets are betting that China has essentially succeeded in the first battle in this long war. If after its sharp decline in the first quarter, it now returns to robust economic growth, on the one hand, and the U.S. teeters on the brink between an extended recession and a genuine depression, on the other, the gap between the GDP of the U.S. and China will grow. If an authoritarian government demonstrates competence in ensuring its citizens' most basic human right—the right to life—as a democratic, decentralized government flounders, objections to the measures China has used to do so will sound to many like sour grapes.

Moreover, we should never forget the larger canvas. There China’s meta-narrative is a story of its inevitable rise and America’s decline. A nation that began the century with a GDP less than a quarter of America’s has now overtaken the US to create an economy larger than ours. A military that was forced to back down in the Taiwan straits crisis of 1996 when the U.S. sent two carriers to the theater has over the past two decades built up an arsenal of “carrier-killer” missiles that would force the U.S. to make different choices today. In the aftermath of the 2008 financial crisis, China’s leadership was emboldened by its success in returning rapidly to rapid growth as the US was stuck in secular stagnation. Unless the US can find a way to rapidly meet the current coronavirus test, China could be tempted to take greater risks, including forcibly bringing Taiwan under Beijing’s rule.