The War Between Trump and Schiff is Just Starting 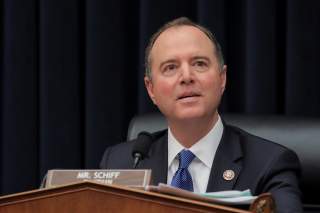 “The Justice Department will release special counsel Robert Mueller’s report on the Russia investigation to Congress and the public by ‘mid-April,’ if not sooner,” Attorney General William Barr said on Friday. Portions of the 300-page report are due within the next couple of weeks to Congress, ensuring that it will not leave the media spotlight anytime soon. Instead, the brouhaha over the report will only heighten the clash between leading Democrats and President Donald Trump. No one is taking a more adamant line on this than Congressman Adam Schiff (D-CA), the chairman of the House Intelligence Committee and lawmaker.

Since Special Counsel Robert Mueller announced one week ago that he was submitting his final report to the Justice Department, it’s been a rough time for people who bet the family farm that the Trump presidential campaign colluded with the Russian government. Not just the media, who disseminated the under-sourced accusation with reckless abandon, but also the politicians who cashed in for political gain.

With the number of times Congressman Schiff has been interviewed on CNN and MSNBC over the past two years, a large number of Americans probably recognize him more than their own representative. Schiff, in his role as ranking member and now chair of the House Intelligence Committee, was invariably asked about collusion with the Russian government, and he spoke about the evidence of conspiracy at length. According to Schiff, it is undeniable that the Trump campaign was involved with the Kremlin, and he frequently determined that Mueller’s investigation would reach conclusions on information that he was not at liberty to say on the record.

Now that Special Counsel Mueller has announced that his investigation “did not establish that members of the Trump campaign conspired or coordinated with the Russian government in its election interference activities,” Congressman Schiff is renewing his assault.

Yesterday during a routine committee hearing, Congressman Mike Conaway (R-TX) used the time allocated for his opening statement to present a letter signed by all nine committee Republicans asking Schiff to step down as committee chair. “Since prior to the inauguration of President Trump in January 2017, you have been at the center of a well-orchestrated campaign claiming, among other things, the Trump campaign colluded with the Russian government. Indeed, before the appointment of Robert Mueller as Special Counsel, you alleged during one of your frequent television interviews that there was ‘more than circumstantial evidence’ of collusion but that you could not ‘go into particulars,’” read Conaway.

Despite the newly released conclusion of the Mueller report, Conaway wrote, “you continue to proclaim in the media that there is ‘significant evidence of collusion.’ You further have stated you ‘will continue to investigate the counterintelligence issues. That is, is the president or people around him compromised in any way by a hostile foreign power?’ Your willingness to continue to promote a demonstrably false narrative is alarming.” The committee Republicans asserted to Schiff that these actions “have exposed you as having abused your position to knowingly promote false information, having damaged the integrity of this Committee, and undermined faith in U.S. government institutions…we have no faith in your ability to discharge your duties in a manner consistent with your Constitutional responsibility and urge your immediate resignation as Chairman of this Committee.”

Schiff went on to mention Manafort’s offer of campaign polling data to “someone linked with Russian intelligence,” Trump’s wish for the release of Secretary of State Hillary Clinton’s 30,000 deleted emails if they were in the possession of foreign government; Roger Stone’s communication with Wikileaks which Schiff called “a hostile intelligence agency,” echoing then-CIA director Mike Pompeo's remarks from 2017; and National Security Advisor-designate Michael Flynn’s discussions with the Russian government about a possible change in sanctions policy under a new administration.

Schiff made it very clear that he does not think any of this behavior is okay. “You might say that’s just what you need to do to win. But I don’t think it’s okay. I think it’s immoral. I think it’s unethical. I think it’s unpatriotic. And yes, I think it’s corrupt, and evidence of collusion. Now I have always said that the question of whether this amounts to proof of conspiracy was another matter. Whether the Special Counsel could prove beyond a reasonable doubt the proof of that crime would be up to the Special Counsel and I would accept his decision. And I do. He is a good and honorable man and he is a good prosecutor. But I do not think that conduct, criminal or not, is okay. And the day we do think that’s okay is the day we will look back and say, ‘that is the day America lost its way,’” Schiff concluded. When asked by other members of the committee if they could respond, Schiff refused and began the regularly scheduled meeting.

The Republican dogpile on Schiff for his conduct in office and penchant for conspiracies continued into the next day. Trey Gowdy, former chair of the House Oversight Committee, said that all Schiff wants “is any kernel of negative information about President Trump so he can use it in 2020.” For that reason, Gowdy takes the minority opinion that the full Mueller report should not be publicly released. “Imagine if every law enforcement agency said ‘look, we didn’t have enough information to charge you, but we’re going to go disseminate all the negative stuff we learned.’ We don’t do that in this country. You’re presumed innocent. If you want to remove that presumption of innocence, go to court, don’t release a report,” he said.

Fox News heavyweight Tucker Carlson said that Mueller’s conclusion foiled Adam Schiff’s plans “to spend the next eighteen months writing direct-mail pieces about espionage, and the Kremlin, and Don Jr. going to jail.” According to Carlson, the “chief collusion-monger” of the Democratic Party is “an unbalanced hack with a weakness for conspiracy theories.” In Carlson’s view, Schiff’s dedication to the Russian collusion myth is not based on fact but “a matter of faith.” Describing his decorum in committee earlier that day, Carlson said Schiff was “like a mental patient screaming at cars in an intersection.” “He’s not mentally competent for the job” of chairing the Intelligence Committee, decided the Fox News host.

Counselor to the President Kellyanne Conway gave her personal opinion to a crowd of reporters on Monday, where she preempted the letter from congressional Republicans. “Many of you…have allowed this person, as ranking member and now Chairman of the Intelligence Committee, just let a lie fly for two years, literally going out, not under oath, and saying day after day, moment after moment, full of vim and vigor, snark and bark, that there’s a mountain of evidence against the president and may actually be bigger than Watergate…He has been able to have unfettered access to all of you, some of whom let the lie fly for two years,” she said. Conway contended that not only should Schiff step down as committee chairman, but also resign his seat in Congress.

And it proved impossible for Trump not to mention Schiff during his remarks at a rally in Michigan Thursday night, his first since the conclusion of the Mueller investigation. Giving him the sobriquet “little pencil neck Adam Schiff,” Trump remarked that “he’s got the smallest, thinnest neck I’ve ever seen.” “He is not a long ball hitter,” the president told the cheering crowd.

Democrats were just as quick on the defense as Republicans were on the attack. “I’m so proud of the work of Chairman Adam Schiff, in stark contrast to the irresponsible, almost criminal behavior of the previous Chair of the committee [Devin Nunes],” said Speaker of the House Nancy Pelosi, who added the president and congressional Republicans were afraid of the truth and of competence.