The War in Ukraine Must End 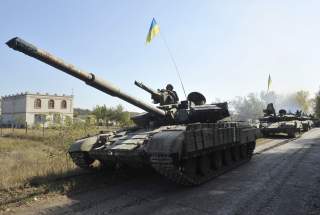 For the parade of American diplomats visiting Capitol Hill lately, the “clear and present danger” is that America might fail to deliver on the half-billion dollars or so of annual aid that keeps the current regime in Kyiv afloat, as such aid has now for almost the last thirty years. To be sure, there have been some benefits. With European and American aid, the former Chernobyl nuclear plant is apparently now adorned with solar panels and wind farms are to follow. How charming. Of course, these renewables are not likely to solve Ukraine’s energy problems any time soon, but it might at least give comfort to millions of HBO fans. Indeed, if Kyiv loses the substantial transit fees that it has gotten for years by transporting Russian gas, Washington will have a much larger hole to fill in helping Kyiv out of its economic debacle.

That point invites greater scrutiny of the famous phone call between Trump and Ukrainian President Volodymyr Zelensky, wherein the two Presidents together muse about how lackluster support has been for Ukraine from both Berlin and Paris. Perhaps these two aloof North Atlantic Treaty Organization (NATO) allies just need to be educated by the American foreign policy elite on the alleged stark reality confronting European security? Or maybe the threat is actually not so grave, after all? Should Ukraine, with all its foibles, really constitute the crucible on which the future of world politics will turn, as Washington’s legions of Ukraine advocates constantly argue?

That venerable crowd will not be pleased to learn that the Russian Transport Ministry announced on November 1 that trains would begin running between Crimea and the Russian mainland before the end of 2019. A schedule was announced, that will indeed bring trains from St. Petersburg and Moscow into both Simferopol and Sevastopol. These trains will, of course, cross the famed Crimean Bridge [Крымский мост] that was first opened with great fanfare in 2018 to vehicular traffic.

As of late October, according to one Russian report, “heavy technical trains [тяжелые технические железнодорожные составы],” consisting of a locomotive with twenty-three cars full of crushed stones was operating on the bridge for tests. The overall weight of the test train amounted to 2,400 tons. Freight traffic is expected to begin on the bridge in June 2020, but there has been a minor delay due apparently to the discovery of a significant archaeological site in Kerch. That discovery involves a settlement dating from the third to the fifth century BC.

Cars and trucks have been moving over the bridge for some time. A new record was apparently reached in mid-August 2019 with almost thirty-six thousand vehicles crossing. Still, it is acknowledged that local auto routes need to be improved, since “traffic jams arise [возникают пробки]” commonly in the vicinity of the bridge. Thus, a plan is evolving to build a highway to the city of Krasnodar, on the mainland some fifty miles east of Kerch.

The rails were laid on the bridge in July 2019. Russian specialists assert that precise welding will allow the “trains to travel smoothly and practically silently over the rails [поезда будут следовать по рельсам плавно и почти бесшумно].” But just in case, the authorities have also installed noise shields on the bridge in areas proximate to the shoreline on either side of the bridge.

Undoubtedly, the opening of the train line across the bridge is another major milestone for integrating the peninsula with the Russian mainland, not least because Russians are quite fond of lengthy train rides—a habit learned from Soviet times. Russia also tend to trust train travel more than the nation’s troubled air transport network. More importantly, the ability to move heavy loads on a regular basis cheaply from the mainland will also be of substantial benefit to the peninsula’s development outlook. Thus, while more than a few Western prognosticators would like to declare “Russia in decline,” that does not quite seem to be as accurate as thought. In a somewhat similar vein, Russia’s economy is still one of the largest in the world. That may explain why the Kremlin is still apparently able to pull off such major national projects occasionally, despite substantial economic headwinds.

Perhaps this is an opportune time to reconsider the tricky Crimea dilemma for American readers. There are indeed many reasons why the U.S. foreign policy establishment needs to “get over it,” to borrow an artful phrase from Mick Mulvaney, when it comes to this famous peninsula in the Black Sea. Below are ten such reasons.

First, the annexation was a relatively bloodless affair, reflecting well-known sympathies on the peninsula itself. Thus, in comparison to widespread violence across the world from Myanmar to Libya to Mexico, this hardly ranks as a major concern.

Second, for the historians among us, it is actually quite significant that Soviet leader Nikita Khrushchev handed Crimea in 1954 on a lark and as a kind of “gift” to his fellow Ukrainians.

Third and continuing on the historical theme, Russians could be said to have actually paid rivers of blood for Crimea, both in the Crimean War and again during WWII—a historical episode that may indeed have saved the planet from Nazism.

Fourth, it should be noted that Russia already had a giant naval base in Crimea during the whole of the post-Soviet period. That strongly implied that Moscow always viewed the peninsula as a key national interest.

Fifth, the chaos of the collapse of the Soviet Union did not lend itself to careful thinking about national borders. Therefore, these borders will continue to be plagued by instability for decades to come. This is a reasonably organic evolution and of little actual significance to U.S. national security, other than to support stability and discourage extremism.

In a related sixth point, one may realize that the neo-liberal habit of reifying international law has become a major problem for world politics. In this case, international lawyers may long dwell in a fantasy land that Crimea will be returned to Kyiv in the future and that this “crime” is beyond all acceptable norms, but the rest of humanity would like to return to normal, daily life.

Thus, a seventh reason is that major European countries, such as Italy, have long wearied of the Crimea sanctions. One can only wonder how much more healthy European economies might be today, including that of economic juggernaut Germany, if Europe chose to drop these policies of deleterious economic distortion.

As an eighth reason, one can reasonably say that these hostile sanction policies are badly dividing NATO, but also preventing the Alliance from acting against palpable security threats, including terrorism and immigration-related to failed states on its periphery.

Then, a ninth reason is that the continuing festering of tensions over Crimea could, by way of misperception, lead to an actual U.S.-Russia military confrontation, which might well reach the nuclear level of conflict in short order.

As a tenth and most important point, one could very reasonably hope that Moscow would be willing to compensate Kyiv for letting the peninsula go finally. This could take many forms, ranging from favorable gas deals to halting aid to rebels in East Ukraine to allowing Ukraine to join NATO without applying counter-measures.

Thus, American diplomats should perhaps turn their attention away from reciting tiresome talking points and stirring up old Cold War tensions to actually negotiating a “grand bargain” to set European security on a much more positive course. Such a bargain is not that far-fetched, actually.

For now, Ukrainians and others in southeast Europe may be less worried about Washington’s impeachment spectacle and more about whether the heat will remain on through this winter. Too bad that American LNG cannot be offloaded at Odessa since the Turks long ago ruled that such vessels could not safely pass through the Bosporus. In any case with U.S.-Turkish relations at nearly an all-time low, that decision is not likely to be reversed any time soon. Still, American oilmen could be pleased to see U.S. oil flowing into Ukraine for the first time—though it’s far from clear that’s either economically efficient or environmentally sound. Perhaps if President Trump ends the war in Afghanistan, as promised, some of the dozens of billions saved could be set aside for Kyiv to build even more wind turbines.

There is that small problem that this aid seems to increase the very corruption it has been allocated to reduce. To hear American diplomats and “Ukraine experts” wax eloquent on the supposedly grave threat to American national security interests in Ukraine these days, it seems they will not be satisfied until they’ve seen a video of American-made anti-tank missiles and sniper rifles delivering up large numbers of casualties against Russian regulars in eastern Ukraine.

Fortunately, most Ukrainians are wiser and more realistic. They know that such battlefield “successes” would likely be followed by devastating Russian air and missile attacks against Ukraine. They also know well by now that neither Americans nor other Europeans are about to come and save them from that sad fate.