West and Russia Spar Over Influence in Africa 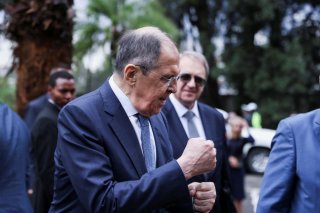 Western and Russian leaders delivered dueling messages in Africa as they continue to compete for international support five months into the Ukraine war.

Russian foreign minister Sergey Lavrov embarked on a four-nation trip this week to Ethiopia, Egypt, Uganda, and the Democratic Republic of Congo. Lavrov’s messaging focused in large part on countering the Western accusation that Moscow has weaponized the food insecurity challenges exacerbated by Russia’s invasion of Ukraine. “Western and Ukrainian propaganda that accuses Russia of allegedly ‘exporting hunger’ is completely groundless,” he wrote last week in a letter for newspapers of African countries, instead blaming the “collective West” for years of economic mismanagement stemming back to the global financial fallout from the Covid-19 pandemic. “Russia will continue to fulfill in good faith its obligations according to international contracts in terms of exports of food, fertilizers, energy and other goods vital for Africa. Russia is taking all measures to achieve that,” Lavrov wrote.

African nations have been among the hardest hit by the war between Russia and Ukraine, which together produced over 40 percent of the continent’s wheat supply. Lavrov acknowledged that “the situation in Ukraine did additionally negatively affect food markets,” but insisted this was “not due to the Russian special operation, rather due to the absolutely inadequate reaction of the West, which announced sanctions.” Gripped by mounting food shortage concerns, African leaders welcomed the recent four-way deal between Turkey, Russia, Ukraine, and the United Nations to unblock grain exports out of Ukraine’s Black Sea ports.

The Kremlin was keen to play upon the goodwill earned by the Soviet Union in Africa during the Cold War, with Lavrov reminding his African audience that Russia, in contrast to large swathes of Western Europe, is not “stained by the bloody crimes of colonialism.”

Lavrov reiterated Moscow’s stance that the West plays an inappropriately outsized role in certain multilateral institutions, arguing that the second and third world should be given a larger voice. “We confirmed our positions when it comes to the reforming of the U.N. Security Council,” he said in Uganda. “The main problem here is the underrepresentation in the Security Council of developing states and the only solution to this problem is bigger representation of Asian, African and Latin American countries.”

As with a significant slice of the non-Western world, many African countries have resisted pressure from the United States and Europe to take a firm stance against Russia’s invasion of Ukraine. “We don’t believe in being enemies of somebody’s enemy,” said Uganda’s President Yoweri Museveni during a press conference with Lavrov, affirming his country’s established position of neutrality in the Ukraine conflict.

The Kremlin has stressed that it does not expect any African country to take an explicitly pro-Russian position, instead expressing support for what Lavrov described as Africa’s “independent” course. “We appreciate the considered African position as to the situation in and around Ukraine,” he wrote. “Although unprecedented by its scale, the pressure from beyond has not brought our friends to join the anti-Russian sanctions. Such an independent path deserves deep respect.”

French president Emmanuel Macron, whose trip to Cameroon coincided with Lavrov’s Africa tour, sounded a sharply contrasting message. “I have seen too much hypocrisy, particularly on the African continent and — I’m saying this very calmly — with some not calling it a war when it is one and saying they don’t know who started it because they have diplomatic pressures,” he said. The French president derided Russia’s self-identification as an ally to anti-colonialist causes, framing it instead as “one of the last imperial, colonial powers” that is currently waging a brutal war of subjugation against its neighbor. Macron’s challenge to Africa echoes the position taken by other Western governments, notably including the Biden administration, that the rest of the world must articulate an unambiguous position on the Ukraine War.

The U.S. ambassador to the UN, Linda Thomas-Greenfield, is slated to visit Ghana and Uganda next week. Thomas-Greenfield is expected to discuss food security issues, as well as “the importance of strong and inclusive democratic institutions, respect for human rights, and the promotion of peace, stability, and economic growth,” according to a readout issued by U.S. mission to the UN. Thomas-Greenfield’s trip will be shortly followed by U.S. secretary of state Antony Blinken’s visit to South Africa, Congo, and Rwanda.

Blinken, who held a phone call with Lavrov on Friday to discuss a possible prisoner swap deal for the release of two Americans detained in Russia, brushed aside Lavrov’s diplomatic blitz earlier this week. “What I see is a desperate game of defense to try somehow to justify to the world the actions that Russia has taken,” he said, according to the AP. “Somehow trying to justify what’s unjustifiable.”

The spurt of high-profile diplomatic visits to Africa highlights the intensifying geopolitical posturing between Russia and the West as the war in Ukraine enters its sixth month. Moscow has sought to demonstrate through a series of diplomatic contacts in Central Asia, the Middle East, and Africa that the western campaign to isolate it has failed. The West, meanwhile, continues to portray Russia as an isolated pariah state that is waging a losing war of aggression whilst being crippled by a debilitating sanctions regime.