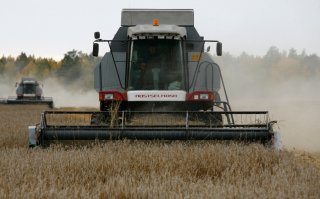 Turkey’s defense minister, Hulusi Akar, announced that officials from the four parties agreed to establish a coordination center in Istanbul to oversee grain shipments out of Ukraine, according to the Wall Street Journal.

“In a world darkened by global crisis, today at last we have a ray of hope. Today is an important step, a step on the way to a comprehensive agreement,” said UN chief Antonio Guterres.

"It was possible to formulate some elements of a possible agreement which Russia, Ukraine and Turkey are now discussing in their capitals through their military departments," added Russian Foreign Ministry spokeswoman Maria Zakharova. The agreement’s final draft must be greenlit by Russian president Vladimir Putin, who previously said Russia is open to some form of a deal to unblock Ukrainian ports for grain export purposes. Putin is expected to discuss the grain issue with Turkish president Recep Erdogan when the two meet next week in Tehran. Ukraine, which has previously cast the negotiations in a cautious light, agreed that progress is being made, with the country's infrastructure minister Oleksandr Kubrako telling Reuters that Kyiv is “definitely a step closer to a result.”

The agreement centers on a joint framework to guarantee the unabated export of grain from three Ukrainian Black Sea ports within a designated safe corridor, a person familiar with the talks told the Wall Street Journal. The Turkish military would be tasked with ensuring the safety of the export routes. Russia previously insisted on the right to check any of the outbound Ukrainian ships for “contraband weapons,” a demand rejected by Kyiv. The latest version of the deal would subject ships arriving in Ukrainian ports to inspections by the Turkish Navy.

Ukraine placed large numbers of sea mines in the opening stages of the war to thwart Russia’s naval advance toward its Black Sea Coast. As part of the deal, Ukraine will likely have to agree to clear a portion of these mines in exchange for security guarantees from Turkey and assurances from Russia that it will not conduct military operations in the delineated shipping zones. Details surrounding the demining process and insurance of commercial ships have yet to be worked out.

The Kremlin has previously conditioned any potential deal for the export of Ukrainian grain on the partial relaxation of Western sanctions against Russia. It is unclear if sanctions relief is on the table in the current four-way negotiations. Top Turkish and UN officials have signaled optimism that the deal can be finalized as early as next week.