What Biden Gets Wrong About European Defense 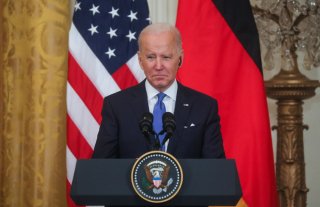 A recent news report in Financial Times suggests that Germany, after harrumphing over Russia’s invasion of Ukraine and pledging a massive rehaul of German defense sector, has returned to its roots. “Germany has proposed basing most of the 3,500 extra troops it plans to contribute to Nato forces on its own soil rather than in Lithuania,” the report states, adding that “Berlin’s latest proposal is for a brigade to be stationed in Germany and deployed to Lithuania — where it has led the existing 1,000-strong multinational battle group since 2017 — only if needed. The force would also have a permanent headquarters in Lithuania, manned by 50 to 60 staff members and the rest of the personnel would regularly come to the country for training.”

One can hardly blame Berlin. If a major European power sees its biggest threat bogged down in the east, with weapons and funding coming from the allies in the West, it would be considered a very realist approach. Consider the recent details. Ukrainian officials have demanded around 1,000 howitzers and 800 multiple rocket launcher systems and tanks to offset Russia’s slow but steady advance in the east. Of course, there’s a tiny problem with that: It’s not possible for Europe to provide those arms. Europeans do not have that many, nor do they have the industrial capacity to produce them in the duration required. Added to that is the unnamed demand of around one million shells and rockets as ammunition. It is a demand for a whole new army.

The only country that can provide this much in that duration is the United States, and it would cost trillions and would empty the Defense Department’s current stockpiles. So far, naturally, the major burden has been taken by the United States, in both weapons and resources, and cash. And it has not been easy. The Biden administration is battling inflation at home and trying to fund a war abroad in the far corners of Europe. It recently announced that the United States is providing an additional $1 billion in military aid to Ukraine, which includes eighteen howitzers, 36,000 rounds of howitzer ammunition, and two Harpoon coastal defense systems. Meanwhile, the Senate Armed Services Committee added $45 billion increase to President Joe Biden’s budget, taking the total cost to a whopping $847 billion, to, in its own words, “counteract runaway inflation, aid Ukraine, replenish weapons sent into the fight against Russia, and fund military priorities left out of the Pentagon budget request.”

This is not sustainable. A recent Kiel Institute paper states that “in total, we trace €85 billion in government-to-government commitments from January 24, 2022, until June 7 … it is remarkable that the US alone has committed considerably more than all EU countries combined, in whose immediate neighborhood the war is raging.” In a different poll, 76 percent of Germans answered yes to the question, “Should Germany become more independent from the United States in its security policy?” The two plausible hypotheses from these trends suggest: One, the EU doesn’t see Russia as enough of a threat and knows Uncle Sucker is there to pay with enough flattery about the rules-based order. Two, the United States is failing to prioritize due to internal political dynamics, old-school Europe-first reflexes, and the massive blitz of the pro-Ukraine public relations lobby. Neither of those conclusions provides any optimism.

Partly, it is the Biden administration’s incoherence that is the problem. Biden doubled down on rhetoric expressing that NATO is sacred, instead of adding more pressure on the EU, in general, and Germany, in particular, to re-arm, as the previous administration did. Added to that is ideological dogmatism. A deepened European political and defense relationship will only be enhanced when Europe has fixed borders—not ever-expanding frontiers. Indeed, this idea of an “Open Europe” that is pushed by small states on the periphery and a commitment to an ever-expanding NATO and EU makes it difficult to strategize a common defense based on common interests and fixed funding. Ultimately, no amount of added expenditure would offset the unsustainable grand strategy of providing security across the globe, especially with rich allies freeriding. It is a strategy that risks overstretch, insolvency, and ultimately, collapse.

Sumantra Maitra is a national security fellow at the Center for the National Interest and an elected associate fellow at the Royal Historical Society.