What Comes Next After Taiwan's Elections? 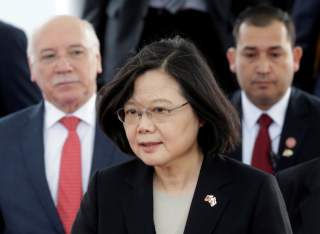 Taiwan’s ruling Democratic Progressive Party (DPP) hit a roadblock in the nationwide local elections held on November 24, losing seven of the thirteen cities and counties it had held since 2014. Now the DPP only controls six. With the political map of Taiwan turning “blue,” many have asked what accounts for this reversal, what it means for the 2020 presidential elections, and how, if at all, this will affect relations across the Taiwan Strait.

Seen as a “midterm” for the Tsai Ing-wen administration, the “nine-in-one” elections were a chance for the opposition Kuomintang party (KMT) to prove that it was not a “spent force,” as many of its critics declared was the case following its poor showings in the 2014 municipal and 2016 general elections. The 2018 elections were also the first occasion for ordinary Taiwanese to express their support for, or discontent with, the DPP administration.

Despite the emphasis that much of the foreign media coverage of the elections placed on cross-Strait relations, the vast majority of Taiwanese were mainly focused on local, bread-and-butter issues—jobs, cost of living, the economy, labor reform, and so on. For most, the China issue was in the distant background, not altogether ignored, but certainly not foremost on their minds as they entered the voting booths. It most certainly was not, as one observer put it in a CNN analysis, due to “widespread dissatisfaction with the ruling party, and a major cause of that discontent is renewed instability in the Taiwan Strait.”

The DPP’s poor showing in the elections, therefore, signaled general displeasure, both with policies implemented by the central government that affected their everyday lives. This includes the two-day weekend, which has caused all sorts of difficulties for small-and-medium enterprises. Moreover, Taiwan has faced a rising cost of living and still-stagnant wages. Voters were also upset over the technocratic manner in which decisions had been communicated with the public. While the expectation that mayors and commissioners could rectify, or overturn, unpopular policies implemented by the central government may have been wrong, the vote was nevertheless a way to communicate discontent upstairs, back to Taipei.

Unfortunately, nothing encapsulated the discontent with the perceived poor government performance than the disorganized manner in which the elections were held. There were long queues and, in some cases, citizens had to wait more than two hours before they could vote. There were also insufficient booths, haphazard vote-counting, and a highly confusing list of ten referendum questions held concurrently with the elections. All of this prompted the head of the Central Election Commission to resign, and the KMT candidate in Taipei has filed a lawsuit to have the election annulled due to irregularities. Furthermore, after the vote, both the green and blue camp, in a rare show of like-mindedness, lamented the poor handling of the elections.

Meanwhile, the referenda were a major setback for the LGBT movement, marriage equality and gender education. In addition, a bid to change the name of Taiwanese teams participating in international sports events from “Chinese Taipei” to “Taiwan” did not pass, not so much over opposition to the name “Taiwan” but rather for more pragmatic reasons. Those reasons included fears that such a move could result in Taiwanese athletes being barred from participating altogether due to Chinese pressure.

In some municipalities, such as the southern port city of Kaohsiung, “DPP fatigue” after twenty years of uninterrupted DPP rule had set in. People wanted change. It didn’t matter that the DPP candidate, Chen Chi-mai, offered substance in his campaign platform, or that his main opponent, Han Kuo-yu, seemed to lack one and instead offered headline-grabbing antics that were oddly reminiscent of Donald Trump. In Kaohsiung, the DPP was seen to have become nonchalant. The same could certainly be said of other cities, such as Taichung, a traditional “blue” base which the DPP had seized in 2014.

Thus, general discontent with the Tsai administration’s performance on the domestic front, rather than foreign affairs, provided the opening the KMT needed to stage a comeback. And a comeback it made. But this was not so much because its candidates waged especially good or imaginative campaigns. Nor was it because the ossified KMT had demonstrated it had reformed itself. Rather, the KMT did well because the public, short on patience, felt that change was needed. The political pendulum, therefore, swung back, just as it had in 2014 after near-universal discontent with the KMT administration of President Ma Ying-jeou. What made a big difference this time around is that the powerful KMT families and local networks, which had chosen to remain on the sidelines in 2014 and 2016, sprung back into action.

A three-way race in Taipei, the capital, gave the incumbent, independent candidate Ko Wen-je, a slim victory against his KMT opponent, Ting Shou-chung, and the DPP candidate, Pasuya Yao, who came in a distant third. In New Taipei City, the KMT maintained its control of the special municipality, with Hou You-yi, defeating his DPP opponent, Su Tseng-chang, by a comfortable margin. Tainan, a green base, remained with the DPP, and incumbents from the green camp were also successfully re-elected in Hsinchu City and Taoyuan, two important industrial centers. DPP victories in those two traditionally blue municipalities also suggest that rather than a general turn against the ruling party, perceptions of performance and hard work were determinant factors in voter decisions. Meanwhile, small parties, such as the pro-Taiwan New Power Party, made gains in the city councilor elections by securing sixteen seats. Additionally, the number of female candidates elected overall saw significant gains—a silver lining to the gains made by conservative forces in the referenda, and a sign of hope that Taiwan remains, after all, one of the most progressive nations in the Indo-Pacific region.

The biggest surprise was in Kaohsiung, in which the outlier, Han, soundly defeated his establishment opponent, Chen. Much of Han’s campaign had focused, if only in very general terms, on improving the economy (he also promised to ban political protests and drill for oil on Taiping Island in the disputed South China Sea). In the lead-up to the elections, it was also clear that the maverick Han was a Beijing favorite, most likely because he represented a break with longstanding political forces in Taiwan with whom the Chinese leadership had lost patience as it looked for partners to help with their unification agenda.

Tellingly, the day after his election, Han told a press conference that the first thing on his agenda would be to recognize the so-called “1992 consensus,” a precondition by Beijing which the Tsai government has refused to abide by, and set up a “cross-Strait working group” to bring Chinese investment and tourism to the city. The KMT mayor-elect for Taichung, Lu Shiow-yen, then followed suit.

China had not been at the forefront when voters cast their ballots on November 24, and cross-Strait relations are not an obsession with ordinary Taiwanese. For instance, on the day Han made his remarks about working more closely with China, the most-searched item on Google in the Kaohsiung area was “九二共識”—that is, “1992 consensus” and the attendant “one China.” What this suggests is that voters found much appeal in the promise of an improved economy, but did not think clearly about the implications of that policy. It also confirms that a substantial number of Taiwanese do not know, or particularly care about, what the “1992 consensus” stands for and what it signifies regarding cross-Strait relations. When residents of Kaohsiung woke up on Sunday, they found themselves with a future mayor who, rather disturbingly, sounded almost exactly like the State Council’s Taiwan Affairs Office (TAO) spokesman. They were naive, perhaps, or did not sufficiently heed the many warnings that Beijing may have had a hand in the elections. Han, who has already sparked concerns within the KMT over his seeming desire to make his own decisions regardless of party preferences, now represented the perfect example of Beijing’s new policy toward Taiwan, which is to establish corridors and connections at the local level and, in so doing, bypass the central government.

Consequently, while the elections were fought over primarily domestic matters, their outcome now present the Tsai administration with a much more complex political map, one in which Beijing has the opportunity to further “Lebanonize” Taiwan. The upset has also emboldened elements within the “deep green” camp who have long been dissatisfied with President Tsai due to her alleged unwillingness to be more active on Taiwan sovereignty and more defiant of Beijing. Following custom, Tsai stepped down as party chairperson on the night of the elections, which now opens the door for more “extremist” forces to guide the future direction of the party. The results have also amplified calls for a candidate other than Tsai to run on the DPP ticket in the January 2020 presidential elections. Meanwhile, elder members of the “deep green” camp have also announced they will form their own political party and field candidates in 2020, a decision which could split the party and hurt its chances of victory.