What to Expect from Joe Biden’s Summit with China 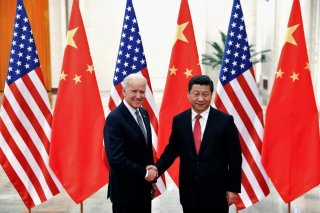 The last time President Joe Biden saw Chinese president Xi Jinping face-to-face, the year was 2015 and Biden was vice president of the United States. That long streak, however, will end today as Biden and Xi hold their first-ever virtual summit, at a time when U.S.-China relations can fairly be described as more acrimonious than they were six years ago. This video conference couldn’t come at a more important moment, when Washington and Beijing are competing on everything from cybersecurity and trade to strategic stability and Taiwan.

Despite the characterization of the Biden-Xi summit as a clash of wills between the world’s two greatest powers, this summit provides a rare chance to bring stability to the U.S.-China relationship. This is no easy task though: U.S.-China relations have become so unproductive over the last several years that even the mere semblance of cooperation on a single issue (like climate change) can get blown out of proportion as a major breakthrough.

The dispute is fed in large part by China’s transition from a relative backbencher in the international system to a serious, powerful player in its own right. As Beijing has grown wealthier over the last two decades, increasing its GDP twelve-fold since the turn of the century, the country’s leadership has predictably sought to translate this wealth into military power. In the past, China was not militarily or economically capable to pursue its interests forcefully. But this isn’t the case today.

Look no further than Taiwan, the self-ruled island the Chinese Communist Party (CPP) remains intent on unifying with the mainland—through military force, if required. Chinese military aircraft flying into Taiwan’s self-declared air defense zone, a rare if not nonexistent maneuver only a few years ago, is now practically a monthly occurrence. The Chinese economy, the second largest on the planet, is the engine of Asia’s economic growth. China is the number-one trading partner for many nations inside and outside of Asia; last year alone, Japan exported 20 percent of its goods to China, overtaking the United States as Tokyo’s largest export market. For Beijing, trade is not only good for its bottom-line but another leverage point on the road to regional power.

China is now at the center of the U.S. foreign policy discussion and is likely to remain there for decades into the future. Washington, DC is where the talk of China’s inevitable rise is most widely assumed. Biden consistently argues that China is not only catching up to the United States, but could soon surpass it if Washington doesn’t get its own house in order.

U.S. officials, however, need to keep a cool head and add some desperately needed perspective into the policy debate. Hyping the threat Beijing poses to U.S. interests will do nothing to help Washington manage U.S.-China relations adequately—indeed, it’s primed to worsen the problem and complicate any prospect of a functional bilateral relationship between the world’s two largest economic powers. China is not the ten-foot-tall geopolitical giant in the room, nor is Beijing immune to external shocks, economic malaise, or strategic overreach. The CCP, after all, is still dealing with one of its most disruptive energy crises in years—so disruptive, in fact, that half of Chinese cities had to ration electricity due to a coal shortage.

Yes, Beijing is continuing to make intense investments in places like Africa and Latin America and is enhancing its diplomatic weight at the United Nations. But Beijing’s so-called “wolf warrior” diplomacy and politicization of Covid-19 aid donations haven’t endeared many to China. While the CPP is notoriously sensitive to criticism on issues like human rights, its thin skin has cost Beijing dearly. One would have been hard-pressed a year ago to imagine the European Union sanctioning Chinese officials over policies in Hong Kong and Xinjiang, exploring deeper relations with Taiwan, or suspending a comprehensive trade agreement that took seven years to negotiate. China was once viewed in Europe as an opportunity; now, it is increasingly seen as a strategic challenge, with nearly two-thirds of Europeans believing Beijing has a negative influence on global affairs.

China’s immediate neighbors are beginning to respond to Beijing’s rough-handedness as well. The competing territorial claims and military buildup are pushing countries like Japan to hike their defense budgets and accelerate purchases of big-ticket weapons platforms like advanced fighter jets and medium-range missiles. Some Japanese politicians are calling on Tokyo to double defense spending to 2 percent of GDP, in line with NATO benchmarks. Australia, once wary of alienating China and potentially jeopardizing tens of billions of dollars in trade, is now on track to spend an additional $187 billion on its military over the next decade. Canberra is also advocating for a more active role in stabilizing the Indo-Pacific, no doubt a consequence of Beijing’s year-long trade war with Australia. In an attempt to seek dominance, China has in effect created more problems for itself.

All of these developments should give Biden some degree of confidence as he talks with Xi. China may be a serious competitor, but it is not insulated from the realities of a changing world. It would be a major mistake for U.S. officials to believe otherwise.