What Happened to that "Blue Wave"? 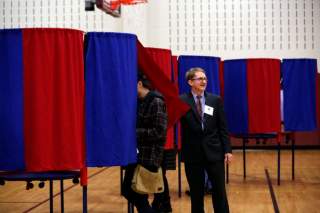 There was no Blue Wave on Election Day. At best, there was a wavelet. The Democrats took the House, but the number of seats that “flipped” from Republican to Democrat was far lower than that of 2010, when the Democrats lost sixty-six seats, or for that matter, smaller than the average turnaround in a midterm election held after a new president had assumed office two years earlier.

President Donald Trump naturally has claimed victory, as everyone expected he would, unless Republicans had lost the Senate as well, which they did not. They added seats. The Democrats, and their supporters in the mainstream press and cable television, are crowing about the House. But just as Trump may be misreading his victory—he has yet to feel the pain of ceaseless House hearings and investigations of his conduct and that of his leading appointees—so the Democrats need to rethink just what the country was telling them.

The Democrats, and their supporters in the media, trumpeted the campaigns of Beto O’Rourke in Texas and Andrew Gillum in Florida, both of whom raised huge sums of money yet lost. Both men, like Alexandria Ocasio-Cortez—the 29-year old former bartender and waitress who not yet having been elected, but merely the winner of a Democratic primary in a heavily minority district of the Bronx—became liberal media rock stars. All three sent a subliminal message that they supported unrestricted immigration by loudly calling for closing down the Immigration and Customs Enforcement agency. All three favored a single payer Medicare system, without explaining how it would be financed. All three were vocal supporters of the more extreme demands of the LGBTQ communities. These three, and other less well known Democrats who shared their views, probably were responsible for their party’s underwhelming showing in the Congressional elections.

A look at the electoral map shows that much of America, from the Appalachians to the Sierra Nevada and the Cascades, returned Republicans to both the Senate and the House. Not all of these people are undereducated. Not all of them are working class. Many live in suburbs, many are independent, many are even women! There is no doubt that these people have been turned off by Trump’s rhetoric and personal behavior. But it should be equally clear that they were also put off by the growing impression that the likes of O’Rourke, Gillum and Ocasio-Cortez, not to mention Nancy Pelosi, are the long-term face of the Democratic Party. And that face was simply one that many people could not accept. They were prepared to trim Trump’s sails, but they were not prepared to throw his policies overboard.

There is no real evidence that the majority of Americans who have voted Republican are bigots any more than there is evidence that the majority of Democrats are socialists. But clearly, a majority of voters, including the fabled suburban moms, believe that people whose first interface with America is to break its laws—by entering the country illegally—should not be allowed to enter at all. That is not a racist view any more than Canada is considered to be racist because it does not allow for unrestricted immigration.

Similarly, many voters who are strong supporters of Medicare and Medicaid are not comfortable with the notion of a free country-wide medical system that would have to be financed from the taxes paid by middle class citizens who, unlike their wealthier counterparts, cannot afford high-priced accountants who can enable them to game IRS rules.

Finally, it is clear that the majority of Americans have no issue with what their fellow citizens do privately; but many voters have not reacted well to government enactments such as those regarding who may enter which public toilet.

In other words, the vast majority of Americans are still moderates who can opt for either party in any given election, but back away from extremes. They did so again this election—they put a brake on any attempt to legislate the president’s more extreme inclinations, and at the same time, demonstrated that the Democrats may be moving too far from the center. It is a message that both parties should note as they begin their preparations for the next round two years down the road.