What Happens After India and Pakistan Clash Over Kashmir? 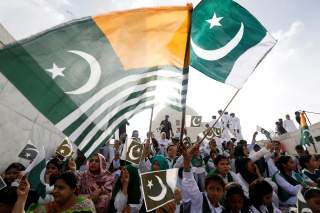 Tensions between nuclear-armed archrivals India and Pakistan are increasing after the former ended the special status of Jammu and Kashmir on August 5. Ties are further vitiating as reports of torture and brutality in what Pakistan describes as an “Indian Occupied Kashmir” are being reported by international media outlets. Pakistan’s response to India’s Kashmir gambit has been a diplomatic one with Pakistani prime minister Imran Khan leading the campaign to fight Kashmir’s case globally. Khan, who began calling himself the “Ambassador of Kashmir,” vowed to take up the Kashmir cause at the United Nations General Assembly (UNGA). He gave an emotional speech on the topic as part of his blistering campaign at the UNGA. Hostilities began increasing between India and Pakistan after India claimed that it attacked alleged terror launchpads and killed many militants. Pakistan emphatically denied India’s assertions and took foreign diplomats to Kashmir to show them the wreckage caused by India’s artillery shelling. Though both countries remain embroiled in a war of words, threaten each other, and trade-fire on the Line of Control (LOC), a military confrontation between them has not taken place. However, the situation in Kashmir remains an incendiary force for yet another military crisis between Islamabad and New Delhi. Should it occur, it is likely to be more dangerous than the Pulwama-Balakot crisis that played out earlier this year. There are three reasons why a crisis between these two nemeses will be more intense.

At the Tipping Point

New Delhi’s annexation of Kashmir has been followed by the deployment of security forces in Kashmir. Also, not even spared pro-India politicians have been spared. Last month, eighty-three-year-old Farooq Abdullah and others were arrested under the controversial Public Safety Act. The incarceration of the erstwhile loyal corps of politicians has left New Delhi with a weak support base in Kashmir. Worse, they may find it difficult to lend political support and compensate for India’s lack of popular support in the disputed region, especially when their ties with the Modi government were strained long before August 5.

Moreover, India’s troubles are likely to mount because of its high-handed policy towards the Kashmiris. The international media continues to document gory stories from Kashmir. There have been reports of widespread detentions and egregious torture. The coverage belies New Delhi’s claims of restoring normalcy in Kashmir. However, the use of brute force has not dampened the spirits of the Kashmiris who continue to defy and resist India. Unfazed, the Kashmiris have taken to the streets and clashed with security forces, despite a virtual lockdown. The besieged Kashmiris came out in numbers in support of Prime Minister Khan after his speech in UNGA, calling him a beacon of hope and support in their fight for freedom.

The Kashmiri resistance is something that could turn this ongoing Kashmir crisis into a military one between India and Pakistan. In fact, major clashes between security forces and locals that yield security personnel casualties are a potential trigger. While Pakistan would describe such clashes as India’s false flag operation, India would accuse Pakistan of having perpetrated a terror attack. This argument is tenable given that the Pulwama attack was carried out by a local who was humiliated and tortured by Indian security forces. Regardless of how the two sides will view it, a military conflagration will more than likely ensue.

In an interview last month, Indian Army Chief Gen. Bipin Rawat said, “[Pakistanis] are worried that if something goes wrong in the hinterland, whether orchestrated by Pakistan or whether orchestrated from within the country with Pakistan’s help, India will hit back.” If Pakistan-driven violence appears to break out in Kashmir, then there will be pressure on its decisionmakers to inflict a punitive blow to Pakistan that will increase manifold. There are two concomitant reasons as to why India’s response to an alleged terror strike by Pakistan will be larger in scale than the Balakot strikes. First, a climb-down from a Balakot-like response will deride New Delhi’s claims of having called out Pakistan’s nuclear bluff and established a “new normal” in punishing Pakistan. Anything short of deep incursions in Pakistan-administered Kashmir, or mainland Pakistan for that matter, could be brushed aside by Pakistan as a normal cross-LOC skirmish. Pakistan would dismiss such incursions the way it denied the highly-publicized surgical strikes post the attack in Uri in 2016. Second, the Balakot episode did not go according to plan for New Delhi. Contrary to India’s claims of hitting a major terrorists’ seminary, analyses and reports amplified that the target was missed. Pakistan’s swift retort the next day followed by a dogfight between the two air forces ended in India losing at least one of its aircraft with its pilot ejecting inside Pakistani territory. The pilot, Wing Commander Abhinandan Varthaman, was taken into custody by Pakistan with his videos being broadcast on television. Also, the very day the Indian Air Force (IAF) shot down its own Mi-17 chopper that resulted in six casualties. New Delhi’s official claims of shooting down an F-16 of the Pakistan Air Force (PAF) were denied by all neutral observers. The way the IAF fared in Balakot and the ensuing confrontation with Pakistan raised doubts about its war-fighting prowess. This is something that puts question marks on India’s capabilities to take on the role of a “Net Security Provider” in Washington’s Indo-Pacific Strategy against a burgeoning China. Thus, India will try to make amends on all counts, implying that the response could be more forceful and inherently escalatory. A weak response would have political costs for a government that has flaunted its muscle-flexing against Pakistan and gained political mileage out of it.  New Delhi would also want to make a statement and buttress its credentials as a formidable military power that is a counterbalance to Beijing’s rise.

The Gloves Are Off

Pakistan will have its reasons to act differently. Days before heading to the United States to attend the UNGA session, Pakistan’s prime minister Imran Khan said dialogue with India was off the table unless the curfew was lifted and Jammu and Kashmir’s special status restored. Khan’s tone and tenor vis-à-vis India has drastically changed ever since India has taken away Kashmir’s autonomy. In his interviews, speeches, and op-eds, Khan has likened Rashtriya Swayamsevak Sangh to the Nazi party and by extension, Indian prime minister Narendra Modi to Adolf Hitler. Khan also warned the international community that Modi’s appeasement could lead to a confrontation between the two nuclear-armed countries that could have grievous consequences beyond South Asia. This is in contrast to his earlier reconciliatory refrain that called for talks with India.

The tough line taken by Khan, along with the pledge by the Pakistan Army to go the distance for Kashmir and Kashmiris, is meaningful insofar as a future military engagement over Kashmir is concerned. Pakistan’s response to Indian aggression could predictably be more than a “show of intent.” This is primarily because of two reasons.

First, in the midst of a heated Kashmir crisis, a restrained riposte will not be a politically popular decision, especially when critics and opponents are already casting aspersions on the government’s commitment to the Kashmir cause. The audience costs for the government and the military will be colossal if Pakistan gives a measured response and looks for ways to de-escalate the crisis. Unlike Pulwama, a military showdown sprouting out of the current tensions over Kashmir will not just be a fight to defend territorial integrity and re-establish deterrence—not if the Kashmir element will be added to the mix. A lackadaisical and limited response is likely to draw the ire of the Kashmiris on the Pakistani side of the LOC, and they’re already itching to cross the line. Also, India’s use of kinetic options will give Pakistan an ideal pretext to flex its military muscle, something that it has tried to avoid doing since the start of the Kashmir crisis.

Second, the fog of war may just thicken in an altercation that stems from the ongoing Kashmir. Statements from three top Indian officials, including its foreign minister, Subrahmanyam Jaishankar, regarding India’s plans to get control of Pakistan-administered Kashmir, have been described as “provocative” by Pakistan. In such an emotive environment, Islamabad may not construe New Delhi’s military adventures as limited and therefore retaliate accordingly.

Moreover, in the Pulwama-Balakot crisis, Khan’s unconditional release of Wing Varthaman became a cause of de-escalation. If not for that diplomatic gesture, then the crisis could have escalated precipitously, which is something Modi admitted during one of his election rallies. Last month, while speaking to a charged crowd in Muzzafarad, Khan said that India misconstrued his peace gesture as cowardice. Pakistan, he said, will fight ferociously till the very end if India kick starts a war. With tensions high, it is unreasonable to expect Pakistan to quickly climb down the escalation ladder like it did in February.

The Escalation Ladder and Third Parties

What will happen in the region once both sides harden their positions? The occasional crisis between India and Pakistan tends to elicit global attention because of the presence of nuclear weapons on the subcontinent. If both sides believe that they can control escalation, then they are likely to heighten tensions until a third party steps in to mediate. In the current milieu, perceptions of third-party roles in the Kashmir crisis could determine how a military confrontation takes place. India, thinking that major powers have more or less backed its position on Kashmir, may take liberty in applying military power against Pakistan. Having implored the international community incessantly to intervene in the Kashmir crisis without veritable success, Pakistan could feel that it is on its own to fight out its battle and that of Kashmir, and hence increase its reliance on military options. Both these diametrically different views of third-party mediation could have dangerous repercussions on crisis stability, especially when both countries have all but ended bilateral communication.