What Happens Next With Roger Stone's Sentencing? 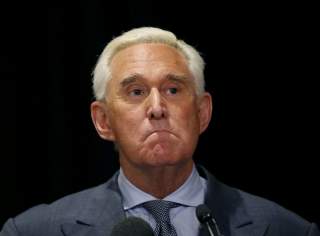 This afternoon the Department of Justice announced that it would be reevaluating the fairness of its sentencing recommendation for Roger Stone. Stone, the longtime Republican political operative and close friend of President Donald Trump since the 1980s, was charged in January 2019 with seven counts of obstruction, witness tampering, and making false statements to Congress, all stemming from the special prosecutor investigation led by Robert Mueller. He was convicted in November.

Yesterday, federal prosecutors recommended that Stone receive seven to ten years in prison ahead of his sentencing hearing next Thursday. This is beyond what was originally expected by the DOJ.

“The department finds the recommendation extreme and excessive and disproportionate to Stone’s offenses. The department will clarify its position later today,” the official said.

At press time, the department had not yet released its statement. But that did not prevent the President from commenting.

“This is a horrible and very unfair situation. The real crimes were on the other side, as nothing happens to them. Cannot allow this miscarriage of justice!” tweeted Donald Trump late last night. It’s been predicted that Trump would use his presidential pardoning power to absolve Stone of all wrongdoing. Previously, the president has pardoned Arizona Sheriff Joe Arpaio, an ally on immigration, and conservative author Dinesh D’Souza.

The Director of the DOJ’s Office of Public Affairs Kerri Kupec has insisted that the decision to alter the sentencing recommendation was made yesterday prior to the president’s tweet, and that department officials have had no contact with the White House relating to the Stone case.

This denial has not prevented former DOJ officials and Democratic lawmakers from accusing the president of an improper intervention into the legal system. Some are even declaring the tweet its own obstruction of justice.

Senate Minority Leader Chuck Schumer (D-NY) has said that he’ll recommend an independent investigation by the Department of Justice’s Inspector General to discover if there was improper political influence on the sentencing change. Rep Jerrold Nadler (D-NY), Chair of the House Judiciary Committee, said his members will “get to the bottom” of it. These threats of congressional investigation come less than one week after the senate acquittal of President Trump on House impeachment charges.

The controversy has been enough that three prosecutors case have announced their sudden departures from the case. Aaron Zelensky was a veteran of the Mueller investigation, while Jonathan Kravis has officially resigned as assistant prosecutor in Washington D.C. Aaron C. Jed has announced he’ll no longer act as counsel for the government. Both Zelensky and Kravis were involved in forming the sentencing guidelines for Stone.