What the Navalny Affair Actually Means for Russia 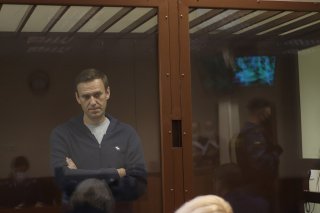 Prominent Russian opposition figure Alexei Navalny is back in court on charges of allegedly defaming a war veteran. The criminal libel case was adjourned on Friday and is set to resume on Tuesday. It stems from a promotional video, produced by media outlet Russia Today, encouraging Russians to vote for the government’s proposed constitutional amendments in a summer 2020 popular referendum. The video featured a slew of famous Russians, including well-known actors and artists, voicing their support for the sweeping reform package revising nearly one-third of the Russian Constitution’s 137 articles. Among the clip’s participants was one Ignat Sergeyevich Artemenko, a former Belarusian partisan who joined the Red Army in 1944. In disputing the libel case, Navalny is averring that Artemenko is being manipulated by the Kremlin--"a doll on a chain."

Navalny took to Twitter to lambast the video and those who took part in it: “Here they are, the lot of them. Admittedly, the team of sell-out lackeys looks rather weak. Look at them: they are a national disgrace. People without a conscience. Traitors.” Artemenko reportedly fell ill shortly after learning of Navalny’s post. Russia’s Investigative Committee determined that Navalny’s comments constituted defamation against Artemenko, spurring an active libel case. If convicted, Navalny will likely face a fine or community service.  This potential punishment would come on top of the three and a half year jail sentence he received earlier this month for parole violations relating to his prior conviction in a 2014 money laundering case. Navalny's defenders, the Washington Post notes, stress that he was not singling out the veteran for obloquy but referring to the group in the video generally. For the Kremlin, however, this appears to be a distinction without a difference.

The first court hearing, held on February 5, saw a combative Navalny clash with the prosecutors, judge, and victim’s family. He called court officials and Artemenko’s relatives “prostitutes” and “political prostitutes,” exploiting the veteran—whom he described as a “puppet with little medals” and “puppet who doesn’t understand anything”—for monetary gain and to further the Kremlin’s agenda. When asked to apologize to Artemenko, Navalny countered that Artemenko’s family are the ones who should express remorse for cynically monetizing him.

Despite repeated admonitions from the judge, Navalny continued to level a flurry of insults against everyone involved in the trial: his repertoire of refrains included ”stooges,” “people without a conscience,” “the embodiment of lawlessness,” and “traitors.” Citing procedural delays caused by Navalny’s “unacceptable” behavior, the judge moved to reschedule the libel hearing for February 12.

The second hearing proceeded much like the first, with Navalny asking the judge if he can “refer to you not as ‘you honor,’ but as ‘“Obersturmbannführer,” adding that she’d “look great with a German machine gun in hand.” Later into the trial, he told the prosecutor to “please stop licking your fingers” and posited that Artemenko’s grandson was “scum” for trafficking in his grandfather’s dignity. When told that he is being censured, he replied, “no, I am the one censuring you.” There were only a few substantive developments. Notably, Navalny’s team suggested that Artemenko’s signatures were being forged and asked for an independent analysis to match Artemenko’s handwriting with certain legal documents; the judge denied Navalny’s request. Navalny’s team brought a linguistics expert, Professor A.M. Baranov, to argue that his comments constitute a value judgment concerning others’ behavior and thus cannot be legally considered libel. The hearing dragged on for eleven hours and, once again, did not result in a ruling. A third hearing has now been scheduled for February 16.

It is difficult to fully grasp the domestic context of the libel case against Navalny without appreciating the role of the Second World War as a sacred core pillar of Russia’s national identity. Russian media has piled on to depict Navalny as, in essence, unpatriotic. Indeed, Navalny’s detractors are noisily accusing him of “spitting on the [Soviet] victory”  and “desecrating the sacred memory” of all those who served in the Red Army during WWII. “If a person allows himself to insult a veteran of the Great Patriotic War on such terms, then their entire historical memory has been reduced to banknotes. A person values their homeland, people, and history, but these terms mean nothing to him,” said Vasili Volobuev, chairman of a prominent St. Petersburg veterans’ association.

Though he faces only a minor legal punishment if convicted, pro-government voices hope that the libel case will deal a crippling public relations blow to Navalny’s credibility as a political leader. With his ongoing courtroom fulgurations, Navalny runs the risk of playing into his critics’ hands. He could possibly have ended the trial on its first day by simply offering Artemenko a qualified apology, carefully written with the help of his lawyers. He could have expressed regret for causing the veteran anguish without budging on any of his underlying beliefs about the Kremlin or the constitutional amendments of 2020. But Navalny opted to go on the offensive, potentially harming his image with a large swathe of Russians who might perceive his statements as an affront to wartime historical memory.

The fallout from the ongoing Navalny saga extends beyond Russia’s domestic affairs, contributing to a cycle of escalation between Moscow and the West. In a stunning interview earlier this week, Foreign Minister Sergey Lavrov suggested that Russia could respond to European sanctions over Navalny’s alleged poisoning and imprisonment by severing formal ties with the European Union. “We don't want to isolate ourselves from world affairs, but we have to be prepared for that,” he added. “If you want peace, prepare for war.” Russia’s Deputy Foreign Minister Sergei Ryabkov leveled a stern rebuke against Washington, stating that Moscow “categorically disagrees with cynical and incessant U.S. attempts to meddle in Russia’s domestic affairs.”  Ryabkov called for a “policy of deterrence” against the United States, “including preventing their aggressive interference and any interference in our internal affairs, but also military deterrence, which arms control, if properly implemented, greatly facilitates.”