What War with Iran Would Mean for the Kurds 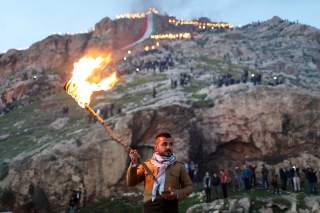 Heightened tensions between the United States and Iran has put the Middle East on edge as the region prepares for the worst. After a war of words between the long-time adversaries, both have propped up their military presence and have alerted their allies and proxies, sending uncertain signals.

But like all major conflicts in the Middle East, the Kurds are likely to be dragged into the mess, whether they like it or not. The Kurdistan Region of Iraq (KRI) was created by the United States during the first Gulf war with the implementation of a no-fly zone against Saddam Hussein. Since then, the Kurds and Americans have shared a unique political and military partnership that has benefited both sides. This alliance, however, took an unfortunate turn in 2017 when the Kurds ignored international calls and moved ahead with an independence referendum, without the blessings of the United States. The skepticism from the Kurdish side towards the Americans is still very much alive. After all, strictly from a Kurdish perspective, how can the Kurdistan region afford to openly back the United States against its neighbor Iran, especially when the United States was nowhere to be found in 2017 at a time of need? That legitimate concern still haunts the two allies.

If there is an outright war between the United States and Iran, the Kurds will likely attempt to lay low unless Washington can guarantee 100 percent air and ground protection for decades to come, which is highly questionable. Unfortunately, America has a negative track record of betraying the Kurds when needed most. What is certain is that the Kurdistan region must not risk its stability and cannot afford to find itself in an ambiguous position similar to their brethren, the Kurds in Syria, who face the likelihood of American troop withdrawal.

We know that a war between the United States and Iran will be a costly and long one—after all, Iran is not Iraq, its military is much stronger, it has proxies across the region, its weaponry is more advanced, its terrain is rough and its population is large. Kurdistan will likely be called upon by the United States to hold down its mountainous region and give access to its airspace. Washington will also probably ask for an open border between the Kurdistan Region Government (KRG) and Iranian Kurdistan where the Peshmerga and Kurdish armed forces will keep watch, giving access to Iran through Kurdish held areas.

But this is easier said than done, as Iran has deep roots across the KRG between all parties, most notably the Kurdistan Democratic Party led by the Barzani clan and the Patriotic Union of Kurdistan led by the Talabani clan. The United States will find it difficult to convince both these parties and their armed Peshmerga forces to simply push away Iran. In the past, Tehran has threatened the destruction of the KRI if they allowed Washington to use Kurdish areas as a launching pad against the Iranian regime. Moreover, Iran has acted on its threats by launching short-range missiles at armed Iranian-Kurdish forces based in the KRI.

Furthermore, tensions between Iran and America will dampen improved relations between KRG and Baghdad. Baghdad too will be forced to choose sides between the two states, and it may bring about the division of Iraq as a whole.

If it were up to the Kurds, they would choose to side with the Americans—but the ties they have with Iran are out of necessity and due to lack of trust with the United States. This has cornered not only Kurdish officials but the Kurdish population as well. Kurds are eager for the destruction of the Iranian regime—after all, it is the same regime which is responsible for thousands of Kurdish deaths. The most likely beneficiary of heightened tensions will be the Kurds in Iran, numbered at an estimated twelve million situated in the northwest, who too desire autonomy and independence. They have been training for the opportunity to strengthen their position and part ways with the Islamic regime militarily. This will possibly see a similar path to the one Kurds in Syria have taken—prove to the Americans they are the most pro-western, secular and reliable force to side with. The Kurds in Syria may benefit too, an increase of U.S. military presence in the Middle East will mean more ground troops in Syria, propping up American allies, including the majority Kurdish-led Syrian Democratic Forces.

Whether war occurs or not, a conflict with Iran only proves that the United States must never abandon its allies, especially the Kurds. Kurdish reliance on U.S. forces in the Middle East benefits both sides, and Kurds are no longer a small minority that can be overlooked. Kurds have proven to be kingmakers in regional conflicts, they have proven to be steadfast, and they are battle hardened. Washington must stand by its Kurdish allies today across the region so when the time comes the Kurds can be there for America.

Diliman Abdulkader is director of the Kurdistan Project at the Endowment for Middle East Truth (EMET). He is a Middle East analyst born in Kirkuk who educates Capitol Hill lawmakers on the Kurdish plight. Follow him on Twitter @D_abdulkader.