Who Would Kamala Harris Pick as VP if She Runs in 2024? 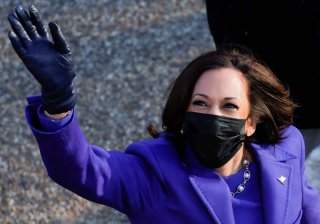 As recent reports uncovered that former President Donald Trump is considering ditching former vice president Mike Pence in a potential 2024 White House run since advisors are pushing him to pick a Black or female running mate, liberal lawmakers have turned to the next Democratic presidential ticket, wondering who would succeed President Joe Biden and Vice President Kamala Harris if Biden doesn’t seek reelection.

Of course, Harris certainly tops the list of Democratic presidential hopefuls in 2024 if Biden decides to step aside—a prediction that experts from both sides of the aisle have echoed, as he’ll be eighty-two years old come the next general election.

And although Harris saw single digits in national polls at one point during the 2020 Democratic primaries when she ran for office, falling behind her opponents like Biden, Sen. Bernie Sanders (I-Vt.), Sen. Elizabeth Warren (D-Mass.) and now Transportation Secretary Pete Buttigieg, vice presidents typically assume the role of running for the commander-in-chief spot after serving as the president’s right-hand man or woman. Harris is also notably the country’s first Black woman and person of Indian descent that’s been sworn in as vice president.

But the larger question is—who would Harris choose as her running mate in a hypothetical 2024 race?

“Presidential candidates generally look for two things in a running mate: someone qualified to sit in the Oval Office, and someone to balance the ticket. For that, Candidate Harris would be expected to pick someone who is male, not from a minority group, and not from one of the coasts. She might also want someone seen as ideologically compatible but not identical—a ‘moderate,’ perhaps, although the meaning of that adjective has become very fluid,” Richard Barke, an associate professor of public policy at the Georgia Institute of Technology, said.

Harris, who was labeled as the most liberal senator in 2019, has several progressive political stances, including raising the federal minimum wage to $15 per hour, reducing the cost of education, and even served as a co-sponsor of the Green New Deal. The vice president also supported taxpayer-funded abortions, arguing they help and save the lives of lower-income women.

Because of Harris’s more liberal-leaning political beliefs, experts appeared to agree that she would likely pick a running mate who stands further right than she is, ideologically balancing a hypothetical ticket.

“Vice President Harris, if she runs, will most likely choose someone who is seen as balancing out her ticket in [the] coalition of the Democratic party. Much the way Barack Obama chose Joe Biden to reassure mainline white Democrats that there will still be a place for them in the party, Harris would probably choose someone younger with a solid record of competent governance,” John Cluverius, an assistant professor of political science at the University of Massachusetts Lowell, said.

That brings one candidate to Kentucky Gov. Andy Beshear, who saw victory in perhaps the biggest defeat in 2019 politics when he beat incumbent Matt Bevin in a state that backed Trump by twenty-six points in the 2020 election. Bevin was one of the most touted Trump-associated governors in the United States.

Beshear proved that he can be a viable candidate in a deep red state, as he boasted Democratic political beliefs like abortion rights but didn’t largely embrace far-Left ideology such as single-payer health insurance and free college tuition.

“If she’s smart, she will pick a non-DC person as a running mate, given the high levels of popular discontent with Washington, DC. Someone may emerge in the states by 2024 whom we have not heard much of yet who might fit that bill,” Steven Schier, a political science professor at Carleton College in Minnesota, said.

Another potential contender could be Rep. Tim Ryan (D-Ohio), who ran for president in 2020 where he emphasized the significance of focusing on working-class voters. Ryan is also reportedly running for GOP Sen. Rob Portman’s vacant seat next year, a race that will likely boost his national name recognition considering Democrats have razor-thin margins in both congressional chambers.

“[Ryan] is generally seen as a centrist who could appeal to the Midwestern blue-collar electorate. Anything can happen in the next three years, as we have seen, but Ryan might be the kind of Democrat that could balance the Harris ticket,” Barke said.

What could make Harris’s potential 2024 ticket even more diverse is choosing a woman to go head-to-head against their GOP competition.

“Alternatively, she may double down on diversity—perhaps a riskier strategy—while also paying attention to electoral geography. Senator Amy Klobuchar of Minnesota and Michigan Governor Gretchen Whitmer might be choices along that line,” Schier said.

Both Klobuchar and Whitmer were once on Biden’s vice-presidential shortlist before he ultimately chose Harris. Klobuchar, however, removed herself from consideration to be his running mate amid the social and civil unrest that swiped across the country during the police killings of Black Americans.

“This is a historic moment, and America must seize on this moment. And I truly believe as, I actually told the vice president last night when I called him, that I think this is a moment to put a woman of color on that ticket,” Klobuchar said at the time.

Klobuchar, an experienced moderate who ran in the 2020 Democratic primaries, was also heavily involved in the Biden-Harris campaign for presidency and has coined a large national support system as she saw early success on her own campaign trail.

But experts warned that it’s important to note that vice-presidential picks will likely not dictate the overall outcome of a presidential election.

And also, it’s largely too early to firmly speculate who Harris might pick, considering the larger question is whether Biden will seek reelection. And if that happens, then the country would likely see another Biden-Harris campaign run, potentially setting the vice president up for a White House run in 2028.