Who Would Donald Trump Pick as His Running Mate in 2024? 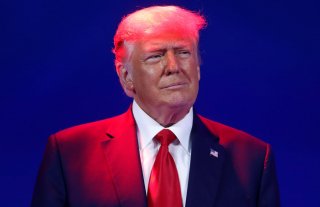 Former President Donald Trump has repeatedly teased he is considering a 2024 White House run, but advisors are reportedly pushing him to ditch former vice president Mike Pence and instead, pick a Black or female running mate for his third attempt at garnering the presidency.

The sources told Bloomberg that the former president has privately discussed more diverse alternatives to Pence, as he recalls who loyally stood by him and who turned against him amid the end of his term, in which he boasted baseless claims of voter fraud and pressured Republicans to reject the 2020 election results.

Pence has already received pushback from Trump after he denied his boss’s orders to unilaterally overturn President Joe Biden’s election victory when he served as president of the Senate and presided over the official count of the Electoral College votes on Jan. 6. Pence’s decision to certify Biden’s win sparked a rift between him and the former president, according to CNN, that may still not be mended.

The sources said that Pence likely won’t be featured on the 2024 Republican ticket if Trump decides to run since the former president wants to replace him with Republicans who stuck by his side through his election fraud claims and second impeachment trial that charged him with incitement of insurrection on the U.S. Capitol on Jan. 6.

“Should Trump decide to run again, and actually get the nomination . . . it wouldn’t be surprising that he would look to someone other than Pence as his running mate. Part of that is the extent to which he thought Pence betrayed him or at least didn’t support him enough in the election aftermath,” Timothy M. Hagle, an associate professor of political science at the University of Iowa, said, adding that Pence may not even “want to be VP again” anyway.

Instead, the sources told the publication that Trump is eyeing South Dakota Gov. Kristi Noem as a potential running mate in 2024, as she’s clearly propped herself up in the national spotlight in recent months through her loyalty to Trump on his campaign trail and her devoted efforts to reject the certification of the 2020 election results. The Trump family recognizes Noem’s support, as Donald Trump Jr. and his girlfriend, Kimberly Guilfoyle, hosted a fundraiser for the governor at Trump’s Palm Beach resort, Mar-a-Lago, last week amid chatter over her own 2024 White House bid.

Alyssa Farah, a former communications director for Trump, recently told Bloomberg Radio’s Sound On program that Noem is reportedly at the top of the vice-presidential shortlist.

“Having [Noem] on a ticket might help Trump with suburban women, who were apparently turned off by Trump,” Hagle, said.

Farah echoed these remarks, noting that Noem as a vice president could appeal to female Republican and Independent voters that he lost in the 2020 election.

Another pick could be Sen. Tim Scott (R-S.C.), the only Black Republican in the upper chamber, who has backed Trump a number of times during his presidency. Last week, the former president also publicly endorsed Scott’s reelection bid.

“My sense is that Tim Scott would be an excellent pick for a running mate. He seemed to pop up on the radar over the summer in a big way during the conversations about police reform. He also has the potential to neutralize or otherwise offset a lot of Trump's negatives, but it isn’t clear to me that this would add up to additional gains in support from minority communities,” Jacob Neiheisel, a campaign expert and associate professor of political science at the University of Buffalo, said.

So, if Trump and his team are weighing running mate candidates purely off how they can rally lost supporters from the 2020 election, then Trump will need to do much more to convince Americans to line up behind his 2024 White House bid.

Neiheisel said he thinks “there is little direct effect of the VP pick on electoral success, although a highly qualified running mate probably makes a difference. Conditional on quality, I'm not sure we can point to many qualities of a VP pick that would help a nominee gain back lost ground among the voters.”

Another vice presidential candidate may be former United Nations Ambassador Nikki Haley, an Indian American who was the first female and minority governor of South Carolina. Though, Haley may be considered out of Trump’s mix after she publicly distanced herself from the former president for his involvement in inciting the Capitol riots and his treatment toward Pence for his refusal to reject the certification of the 2020 electoral vote.

“The best vice-presidential candidates are public figures who are sufficiently able to serve as president and are viewed as plausible presidents by their party's reachable voters and whose selection sends appealing messages about the presidential candidate who selects them,” Joel Goldstein, a vice presidential expert and professor of law emeritus at Saint Louis University School of Law, said.

Bloomberg reported, however, that no serious consideration of a running mate has been decided yet, and if Trump ultimately decides to run, he’ll wait until the summer of 2023 to make the announcement.

But the longer Trump waits to make the formal announcement, the tighter he will effectively freeze the presidential playing field, as there are nearly a dozen rumored candidates eyeing a run, including Noem, Haley and Pence.

The former president’s most recent hints at another White House run was at the Conservative Political Action Conference last Sunday, where he echoed voter fraud claims that the 2020 election was “rigged” and “stolen” from him.