Why the 2020 Election Has Become a Geopolitical Russian Roulette 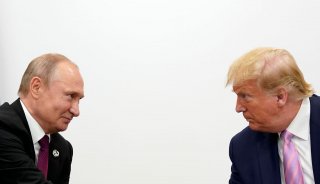 With the presidential election fast approaching, Russia is preparing for another four years of confrontation with the United States regardless of whether President Donald Trump or former Vice President Joe Biden prevails.

A growing consensus in Moscow is arguing that neither Trump nor Biden will improve relations with Russia if elected and that more importantly, the deepening political polarization in the United States will destabilize Washington’s foreign policy decisionmaking for the foreseeable future.

“If you listen to our officials, expectations for relations with the United States are very low regardless of who wins in November,” said Andrey Kortunov, director-general of the Russian International Affairs Council, a think-tank affiliated with the foreign ministry.

“There is a sense that relations cannot get better in the near future until at least the United States exits its domestic political crisis,” he added. “But there also is not much room for things to get worse, since they already are on a low-level today.”

When Trump won an unexpected victory in the 2016 presidential elections, many in Moscow were hopeful that Russia could find common ground with the bombastic billionaire. Russian lawmakers famously burst into applause on the floor of the State Duma upon learning that Trump would become the next president of the United States. For its part, the Kremlin issued a statement calling Trump’s foreign policy approach “phenomenally close” to that of President Vladimir Putin.

Yet that early optimism quickly faded once it became clear that Trump’s stated desire for detente with Russia faced overwhelming opposition from Congress. In the summer of 2017, while Trump was battling accusations that his presidential campaign had colluded with Russia, Congress passed the Countering America’s Adversaries Through Sanctions Act, which mandated that the president receive approval from Congress before removing any existing sanctions against Russia.

Dmitry Suslov, a professor of international relations at the National Research University Higher School of Economics in Moscow, told me that the Kremlin had little reason to believe that Trump’s second term would be any different for U.S.-Russian relations.

“In 2016, the majority of the Russian leadership genuinely hoped that Trump’s victory would bring an opportunity to end the confrontation and improve relations,” he said. “Now there is no such expectation whatsoever. The prevailing view is that regardless of the election’s outcome, Russia must prepare for confrontation with the United States to continue.”

Nevertheless, Suslov noted that Russia’s leadership likely regards Biden as “the worse of two evils” since the former vice president is known to support increased pressure on Moscow over its domestic record on democracy and human rights. Biden is also expected to be far more enthusiastic than Trump about backing Ukraine against Russia, Suslov said.

On the campaign trail, Biden has frequently accused Trump of being insufficiently tough on Russia. The former vice president has also suggested that he will impose new sanctions on Russia if elected.

Yet Biden was not always a Russia hawk or a Putin foe. Some of his early remarks about the longtime Russian president were unusually flattering. As chair of the Senate Foreign Relations Committee, Biden once compared Putin to Peter the Great, a seventeenth-century tsar credited for modernizing and westernizing Russia.

Upon becoming Barack Obama’s vice president in 2009, Biden became a strong supporter of his administration’s “reset” policy with Russia, even coining the term itself.

Biden’s relationship with Russia soured over the past decade, however. During a 2011 visit to Moscow, Biden reportedly angered the Kremlin after he told Russian opposition leaders that the United States did not want to see Putin run for a third presidential term. Following Russia’s annexation of Crimea in 2014, Biden became the Obama administration’s point man on Ukraine and spearheaded U.S. efforts to rally its European allies to impose sanctions against the Kremlin.

Yet many in Moscow are increasingly looking less at the specific positions of both candidates, and more at the growing political polarization in the United States. From Russiagate to impeachment, the past several years of political battles in Washington has left a strong impression on Russia’s political elite, convincing that Washington’s partisan divisions are approaching a boiling point.

The past eight months have only strengthened that perception. During an interview in June, Putin argued that the George Floyd protests were a sign of “deep internal crises” in the United States and suggested that Washington’s response to the coronavirus pandemic had been undermined by partisan divisions.

“Few in Russia understand what is going on right now in the United States, yet looking at the situation from the outside, one gets an impression of total madness,” said Fyodor Lukyanov, chairman of the Council on Foreign and Defense Policy, a research group that advises the Russian government.

Lukyanov told me that recent events have convinced Russia’s leadership that attempting to improve relations with the United States over the next four years is “not only pointless but even potentially dangerous.” Moscow is concerned that any diplomatic efforts between the two countries would quickly become dragged into U.S. domestic political battles, he explained.

“As a result, you often hear [in Moscow] that we should minimize relations with the United States as much as possible until things calm down over there,” Lukyanov said. “But that is unlikely to happen before 2024 at a minimum since if Biden takes office, he will govern a country as divided as the one Trump did, only the sides will be switched.”

How does Russia plan on dealing with a potentially unpredictable United States over the next four years? One option is to continue strengthening relations with China. Since 2014, when Moscow found itself estranged from the West over the Ukraine crisis, Russia and China have boosted their bilateral trade to $110 billion in 2019 while also cutting their reliance on the dollar. The two countries now regularly hold joint military exercises, including in geopolitical hotspots such as the Baltic and South China Seas. Russia has also sought to lessen its technological dependence on the United States by turning to Chinese tech giants like Huawei Technologies.

Suslov told me that Moscow and Beijing are likely to draw closer over the next four years. He argued that the two countries are well-positioned to push back against Washington.

He predicted that deepening polarization would “weaken the ability of the United States to conduct an effective foreign policy making it more impulsive, more mercantilist, and less capable of consolidating allies to confront Russia and China.”

“Russia is going off the assumption that while the United States’ policy of confrontation is painful but not deadly,” Suslov added. “And that in the long run, it will be the United States that will have to adjust its policies, adapt to a multipolar world, and accept both Russia and China as legitimate great powers.”