Why America Must 'Invade' North Korea 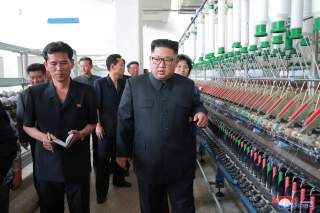 North Korea is not rushing to disarm. Pyongyang’s return to its rhetoric of old to describe Secretary of State Mike Pompeo’s visit suggested a significant difference between United States and North Korean expectations.

That should surprise no one. Supreme Leader Kim Jong-un would be foolish to cast away weapons developed at such cost—which are the only certain means to protect his rule from America’s overwhelming military power. Since taking over in December 2011 he has ruthlessly consolidated power. He knows that foreign leaders trust Washington at their peril.

In fact, many observers remain skeptical that Kim is willing to yield his arsenal for any economic reward. Last year Dan Coats, the director of National Intelligence, explained that he “has watched, I think, what has happened around the world relative to nations that possess nuclear capabilities and the leverage they have.” The experience of Libya dictator Muammar el-Qaddafi was “If you had nukes, never give them up. If you don’t have them, get them.”

Has Kim had an unexpected change of heart? Not likely, but even if so he wouldn’t give away his deterrent based only on the president’s promise of goodwill after five hours of talks.

Indeed, the summit communique set denuclearization as last in a series of actions. The first was to “establish new U.S.-DPRK relations” reflecting a mutual desire “for peace and prosperity.” The second was “to build a lasting and stable peace regime.” Third was working for denuclearization.

Although the president may have wanted to get the nukes at the beginning, that never was Pyongyang’s view. Before the summit Kim asked why his country would need nuclear weapons if it established good relations with America? There’s an obvious answer to that question—ask Muammar el-Qaddafi how his bromance with President George W. Bush worked out—but even if Kim was serious the relationship he suggested would require more than one brief meeting. Creating a “lasting” system will take time.

Amid reports of continuing North Korean nuclear work, the administration should advance engagement policies to help move the denuclearization process forward. What initiatives at little cost or risk to America would promote the sort of relations and regime Kim requested? What would help convince Kim that the United States does not now nor ever will support regime change?

First, Secretary Pompeo should drop the ban on Americans traveling to the Democratic People’s Republic of Korea. Imposed last September, the prohibition made no sense even then. Otto Warmbier’s case was tragic—and almost certainly more complicated than commonly presented. But he was the only one detained in 2016 out of about one thousand Americans who visited. Obviously, the North did not routinely arrest U.S. visitors.

When visiting North Korea last June I spoke with the leader of a religious NGO who had investigated the cases of Americans who had been imprisoned. All had broken North Korean rules. They didn’t deserve their punishment, but violating local laws and customs could result in the same or worse in other nations. Indeed, Americans have been arrested for political purposes by such nominal allies as Pakistan and Turkey. Americans also have been kidnapped by radical groups when visiting Afghanistan, Iraq and Syria.

Anyway, past abuses are unlikely to recur. Whatever Kim’s intentions, he is not so foolish as to ostentatiously antagonize Washington by treating another American as he did Warmbier. Any kind of détente will require Americans to visit, not just for leisure, but for business and as educators, humanitarian workers, journalists and policy analysts. I’ve gone twice in the latter capacity and learned much. In turn, foreigners educate North Koreans, by their very presence refuting regime propaganda. The best hope for peaceful transformation of the North is from the inside. The greater the foreign contact the better.

Second, the administration should end its ban on North Koreans visiting America. The North likely was added (along with Venezuela) in an attempt to undercut claims the president was implementing a “Muslim ban.” The measure also may have been intended to increase the North’s isolation.

However, the restriction made even less sense than preventing Americans from traveling to the DPRK. Very few North Koreans came to America. They are not allowed to travel freely and certainly not to the United States. Most visitors were government officials, guests of NGOs, and defectors. Why block any of them?

Instead, the administration should encourage North Koreans to visit. The United States famously hosted Soviet students, some of whom ended up serving under Mikhail Gorbachev. South Korea recently approved of academic exchanges with DPRK universities. North Korean college professors are studying in Canada. Why shouldn’t students and professors—and eventually even tourists, if the North changes sufficiently—come to America as well?

Third, Washington should drop its designation of North Korea as a state sponsor of terrorism. The label actually has nothing to do with sponsoring terrorism. The United States routinely cites regimes, such as Cuba, Iran, Sudan and Syria, which it dislikes for other reasons. The North’s last known terrorist act was the destruction of a South Korean airliner thirty years ago.

The president added Pyongyang last year not because it staged a terrorist attack but because he wanted to intensify his “maximum pressure” campaign. After threatening the North with “fire and fury,” there wasn’t much more to do other than accuse Kim of being a terrorist. Behaving badly, such as imprisoning Otto Warmbier, as some activists bizarrely argued, doesn’t count as a terrorist act.

The designation has little practical effect, since Pyongyang faces a daunting array of unrelated bilateral and multilateral sanctions. But dropping the label would be another way to indicate that the United States is trying to build “new relations.”

Fourth, the United States should propose establishing diplomatic relations. There is rarely a good reason for governments, especially when at potentially violent odds, not to talk. Imagine the Cuban Missile Crisis if the United States and Soviet Union had no relations and no embassies—and especially no diplomats in contact with the other side. In contrast, imagine if the United States and PRC had talked directly in late 1950 when U.S./UN forces were racing toward the Yalu and Beijing was preparing to intervene in the Korean War. A dialogue mixing warnings and explanations, rather than muddled attempts through indirect channels, might have prevented more than two additional years of combat.

The unique circumstances of the birth of two Korean states encouraged many countries to choose one Korea or the other. However, Washington’s continuing refusal to acknowledge Pyongyang is senseless. In 1991 Russia recognized the Republic of Korea. The PRC followed a year later. Why does America (and Japan) only acknowledge the South? Whatever the prospects for reunification, today there manifestly are two separate Korean states.

Recognition should be seen not as reward but as a path toward communication and information. Regular, direct conversation is particularly important as Washington and Pyongyang enter a process that is supposed to yield denuclearization. The summit statement indicated that both leaders “commit to hold follow-on negotiations.” The best way to do so is to establish an embassy with diplomatic staff in both capitals.

Moreover, we would learn more about what long has been one of the most isolated nations on Earth. Argued James Clapper, former Director of National Intelligence, an embassy would be “an opportunity for direct physical access, which would enhance our insight and understanding and, perhaps even more importantly, foster interaction with the people of the DPRK and enable the flow of information from the rest of the world.”

Of course, one should not oversell the likely impact of a U.S. diplomatic facility. Plenty of tyrannies survived contact with American diplomats. Nevertheless, Washington should look for opportunities to engage the North Korean people, however limited the likely impact. Indeed, the North’s desire for recognition would allow the Trump administration to press for dialogue over human rights and access to people beyond apparatchiks in Pyongyang.

None of these proposals address the substance of denuclearization. But they would demonstrate that the United States desires to create the sort of trusting relationship which Kim suggested was necessary for disarmament. Moreover, even if he was not serious these steps—exchanges and contact—would be worthwhile on their own. Indeed, an embassy and regular diplomatic contact would be even more important if tensions regrettably rose and relations reverted back toward confrontation.

No one knows where the United States and North Korea are headed. Kim Jong-un is different from his predecessors and the Trump-Kim summit has created dramatic new opportunities. The DPRK still might prove impervious to U.S. proposals to open the famed Hermit Kingdom. But it wouldn’t hurt for Washington to ask.