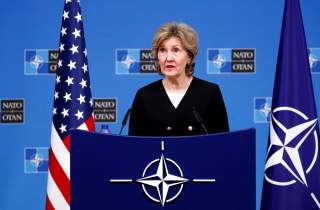 As a Senator, Kay Bailey Hutchinson was a moderate conservative. But as the current U.S. ambassador to NATO, Hutchinson seemed to lose her prior restraints. She appeared to threaten an attack on Russia.

Moscow is developing a new cruise missile which Washington claims would violate the 1987 Intermediate-range Nuclear Forces treaty. If Russia proceeds, said Hutchinson, then the Putin government would be put “on notice” of possible “countermeasures,” which “would be to take out the missiles that are in development by Russia in violation of the treaty.”

She warned that action could come when Moscow had developed its new weapon “to a point where we know they are capable of delivering. And at that point we would then be looking at a capability to take out a missile that could hit any of our countries in Europe and hit America in Alaska.”

After her remarks triggered an international furor she insisted that she was not warning of a preemptive strike. Maybe the problem was just a maladroit expression. After all, the new missiles really don’t change the threat facing America: Russia already is capable of hitting any target in America with its strategic missile force.

But Hutchinson’s remarks were so disturbing because any preventive strikes would ensure Russian retaliation and the potential for full-blown war. The United States avoided taking direct military action against Moscow throughout the Cold War, even during the Cuban Missile Crisis. Attacking the Russian homeland during peacetime would be simply mad.

However, hubris has dangerously infected America’s relationship with Moscow.

During the 2016 presidential campaign most Republican candidates—though not Donald Trump—sought to appear tough by threatening Russia with war. At least Hutchinson worried about a weapon which could hit America and Europe. Most of the GOP presidential contenders were prepared to start a great power conflict over Syria’s civil war.

For instance, a no-fly zone became the favorite proposal for candidates to use to demonstrate that they were tougher than President Barack Obama. The only problem was that Russia and Syria were using airpower to target insurgents. However, the prospect of a military confrontation with Moscow only seemed to invigorate the candidates. And not just Lindsey Graham, who always treats military action as the first resort. Other candidates prepared for war with a nuclear-armed power included Jeb Bush, John Kasich and Carly Fiorina.

Chris Christie was most explicit. In typical blustering style, he declared that “My first phone call would be to Vladimir, and I’d say to him: ‘Listen, we’re enforcing this no-fly zone.’” Unfortunately, Christie did not tell voters what he would say if Vladimir responded by threatening to take down American aircraft, plane for plane.

When asked if he was willing to risk war by shooting down Russian aircraft, Christie insisted: “Not only would I be prepared to do it, I would do it.” Indeed, he pledged that the Russians would find out that the president no longer was “the feckless weakling that the president we have in the Oval Office is right now.” What, however, would the self-proclaimed tough guy have done if Moscow demonstrated that it could not be cowed? Did Christie understand that with less conventional capability Russia would be tempted to employ nukes earlier in the escalatory ladder?

Unfortunately, Christie was only following in the footsteps of others. In 2008, the country of Georgia targeted South Ossetian separatists, backed by Russian forces, with artillery, sparking a short war with Moscow. The late Sen. John McCain declared that “we are all Georgians now,” even though their government had started the fighting. McCain had also encouraged Tbilisi to believe that America would come to its rescue.

Far more serious than McCain’s reckless actions—thankfully, he never became commander-in-chief—was the Bush administration’s debate over entering the conflict. Officials reportedly contemplated “surgical strikes” as well as destroying the Roki Tunnel, through which Moscow was sending men and material. Although urged on by some staff members, senior policymakers said no. Surely they realized that the Putin government could not ignore attacks on its military, even by America.

No less than America, Russia has red lines to protect. Indeed, as the weaker party, Moscow has an added incentive to demonstrate that it cannot be intimidated. This is especially true in nearby regions where its interests are greater than those of America. For instance, Damascus is a long-time Russian ally and Moscow’s one beachhead in a region dominated by America. Georgia was part of both the Russian Empire and the Soviet Union and remains on Russia’s border. Washington’s interest in both conflicts was marginal at best, and primarily humanitarian, which did not warrant war.

Moreover, for Moscow the issue goes beyond the individual conflicts. For the Putin government to abandon important interests on America’s demand would be but the beginning, encouraging the United States to employ coercion elsewhere. After all, Washington has proved itself to be a most meddlesome power, intent on having its way everywhere, at whatever cost. The American government is currently applying sanctions—or considering doing so—on most of the known world: Europe, China, Russia, India, North Korea, Iran, Cuba and more.

The United States will remain the most powerful nation for years to come. However, its ability to unilaterally impose its will is waning. And policymakers who imagine adversaries can be easily browbeaten ignore how Americans would react in similar circumstances. Especially when the opponent has a nationalistic population and possesses nuclear weapons.

In 2000, then-candidate George W. Bush suggested that Washington exhibit humility in foreign affairs before quickly dropping that idea. However contrary humility might be to President Donald Trump’s nature, he should incorporate it into his foreign policy. Americans would be safer if the United States did less and made less threats.