Why an “American Jihad” Is a Terrible Idea 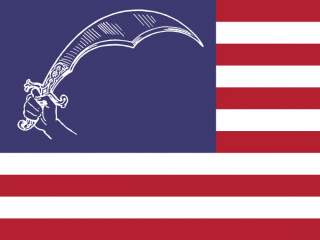 “Among the many definitions of jihad,” writes Fox News Medical A-Team member Keith Ablow, “are a ‘war or struggle against unbelievers’ and ‘a crusade for a principle or belief.’ Given those definitions, I believe it's time for an American jihad.”

“An American jihad,” says Ablow, “would embrace the correct belief that if every nation on earth were governed by freely elected leaders and by our Constitution, the world would be a far better place.” Ablow lays out a comprehensive plan for national and global rejuvenation in the shade of America’s founding documents. First, we’d “teach...American children to internalize and project their justifiable feelings of pride in our democracy as superior to all other forms of government....[and] embrace the certain knowledge that history will eventually spread our values all over the globe.”

Next, we’d export the revolution, using aid to pro-democracy movements, an “international mercenary force for good,” the CIA, the Special Forces, an “unparalleled health care” system for veterans (why not?), and an army of former members of Congress who would “seek dual citizenship in other nations, like France and Italy and Sweden and Argentina and Brazil and Germany, and work to influence those nations to adopt laws very much like our own.” And the U.S. military would help, too—for “we have a God-given right to intervene...we have been to the mountaintop of freedom, and we have seen the Promised Land spanning the globe.”

Ablow then doubles down, arguing that this international struggle is not only good, but necessary. “We need the spirit of an American jihad,” he writes, “to properly invite, intensify and focus our intentions to preserve, protect and defend our Constitution here at home.”

It’s a bold proposal. It’s also a singularly obtuse one.

We might first ask the agents of the non-American jihad. Jihadist terrorists in the greater Middle East have brought disaster after disaster to the region—airstrikes, invasions, occupations, internal crackdowns. Palestine’s Hamas kicked off a war with Israel earlier this year that left the Gaza Strip in ruins. The same thing happened in 2009 and 2012. Lebanon’s Hezbollah attacked Israel in 2006 and got the same result. Al Qaeda attracts devastating wars wherever it goes. So Ablow has to fight a bit of an uphill battle if he wishes to convince us that this is a model from which we should draw inspiration. It’s a similar story with other attempts at massive international revolution—ISIS is being attacked on all fronts, the French revolutionaries fought at home in the Vendee and then abroad in their neighborhood for decades after they toppled their king and tried to spread their own democracy to the world, and the Bolsheviks in Russia had to scale back their ambitions after getting attacked by just about every civilized country in the world. (The Trotskyists, whose ideas about permanent revolution offer the closest analogue of Ablow’s “American Jihad,” were largely confined to coffeeshops and did not experience the same backlash.)

America is, of course, stronger than any other country, let alone any other jihadist group, which means it can fend off some of the retaliation that its own jihad would provoke. But the grandeur of Ablow’s vision—literally everyone else is not good enough, not even the Germans, whose constitution we helped write—means that we will make many enemies for ourselves. It is hard to imagine that the Europeans, who often hold rather condescending views of America and its government, will not act to stop our jihad. Will they continue allowing our former officials to become citizens of their country? Will they allow us to “unabashedly fund” political movements within their territories, or will they, Putin-like, crack down on foreign funding? If anything, our efforts would make Europe more anti-American and less democratic. The story would be worse elsewhere: the governments of China, Russia and Iran would have fewer reasons not to cooperate openly against us, while the Gulf states might stop their halfhearted efforts to stop their citizens from financing terrorism. Those nations whose relations with the United States are currently ambiguous, such as Turkey or Brazil, would turn more solidly against us. Having angered its allies and emboldened its enemies, Ablow’s United States of Jihad would be isolated internationally. Its word would carry little weight abroad. In other words, Ablow’s plan wouldn’t work.

Worse, even if it would work, it still wouldn’t work. The universal adoption of the American constitution wouldn’t necessarily lead to better governments. The Founding Fathers wouldn’t have been surprised. The Federalist Papers are shot through with a recognition that America’s national government must be structured to accommodate the peculiarities of its circumstances—that it has an important system of subnational governments, that it is a large country, that the subnational governments might be pulled apart by foreign influence if not united, and so forth. These particularities do not obtain in every other country, ever. Is federalism the right governmental principle for small, culturally coherent countries? Is our near-absolute freedom of speech appropriate for nations facing subversion by extremists or whose cultures are more conservative than our own?

Further, America’s constitution was a product of compromises among the political elites at the time. Making these compromises ensured that they were invested in the success of the young republic, or at least were willing to live under its rule. The elites of other countries are not invested in our arrangement, and indeed have made compromises of their own that our constitution does not contain. Should we sweep away the arrangements that have brought stability to their lands in an act of blind faith that a new arrangement, airdropped in, will work much better?

Ablow’s plan rests on a set of assumptions about politics: that good intentions are sufficient to produce good outcomes, that idealism can smash existing political realities, that pure reason is a far better guide to action than tradition, that history has a direction and that direction is toward the good, and that man can, acting on these assumptions, build heaven on earth—or, as he puts it, a “Promised Land spanning the globe.”

These are the core tenets of radicalism, not conservatism.