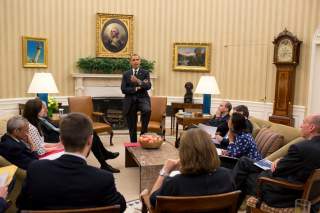 On July 6, Secretary of Homeland Security Jeh Johnson went on NBC’s Meet the Press to answer questions about the current immigration crisis involving tens of thousands of unaccompanied children from Central America flooding the U.S. southern border and crossing into the United States illegally. Host David Gregory asked: “I know there’s a process they have to go through. Will most of these children that we have seen in this desperate situation stay in America, or will they be returned to their homes in Central America?”

Johnson replied: “There’s a deportation proceeding that is commenced against illegal migrants, including children. We are looking at ways to create additional options for dealing with the children in particular, consistent with our laws and our values.”

Gregory apparently wasn’t satisfied with this nonreply. He asked again: “I’m trying to get an answer to: Will most of them end up staying, in your judgment?”

Johnson: “I think we need to find more efficient, effective ways to turn this tide around generally. And we’ve already begun to do that.”

This exchange gets right to the heart of the politics of the country’s ongoing border crisis. Some 57,000 unaccompanied children have arrived since last October, and another 150,000 are expected next year. This is a crisis by anyone’s estimation, and it drives a powerful wedge through the country, dividing those who don’t like this new influx of illegals from those who aren’t really disturbed by it and even, in some instances, see it as an opportunity for creating a new inflow channel. In such circumstances, it isn’t a good idea for high-level government officials with responsibility for that matter to go on national television and sound hapless and vague, as Jeh Johnson did. Too many Americans want answers—and action.

The child-migration crisis announces starkly to the nation that the U.S. southern border is not secure, that it is riddled with loopholes, gaps and scissures. And one thing is clear: Until the president, or some successor president, takes action to deal decisively with this latest border challenge, there is utterly no prospect of any comprehensive immigration overhaul, including a solution for the nearly 12 million illegals already here.

President Obama doesn’t fare well politically on this latest development—or on the immigration issue generally. He has been attacked by many Republican politicians and commentators for what has been described as a certain aloofness in the face of the crisis. The Weekly Standard, in noting the president’s June 30 letter to congressional leaders on the issue, wrote, “The tone was not urgent; it verged on the complacent.” The same could be said of Jeh Johnson’s Meet the Press performance.

The polls indicate many American have picked up on this perception. In a recent Rasmussen Reports poll, nearly half of respondents say the president is to blame for the child-migration crisis, because his words and policies served as a kind of invitation to these tragic youngsters so desperate to escape the growing violence of their homelands. Even before the latest crisis, a June Gallup poll indicated that 65 percent of Americans were unhappy with the president’s performance on the immigration issue.

Hillary Clinton seemed to be responding to this sentiment when she greeted the latest crisis with firm talk. She told CNN: “We have to send a clear message: Just because your child gets across the border, that doesn’t mean the child gets to stay. So we don’t want to send a message that is contrary to our laws or will encourage more children to make that dangerous journey.” She said the children “should be sent back as soon as it can be determined who responsible adults in their families are.”

But Georgia’s Democratic representative John Lewis wants to just forget about the border. He suggested an inscription on the Statue of Liberty: “We are all connected. . . .This is America. Our doors are open.”

And the New York Times seems particularly intent on exploiting the latest crisis as an opportunity to craft policies aimed at sanctifying the influx. First it minimizes the matter: “The besieged border is a myth,” said the paper in an editorial, “and the arrival of a few thousand weary refugee children on buses does not make the myth true.” Then it labels these hapless children as “refugees.” Very clever. Refugee status would confer on these children ready access to American soil. Then the paper opens its “Sunday Review” section to a writer named Sonia Nazario, who makes the advocacy explicit.

“It would be a disgrace,” writes Nazario, “if this wealthy nation turned its back on the 52,000 children who have arrived since October, many of them legitimate refugees. This is not how a great nation treats children.” Not surprisingly, this also is the solution put forth by the United Nations, which has no particular interest in the fundamentals of American sovereignty.

But most Americans do have an interest in their country’s sovereignty, and they see the issue as a litmus test on whether their leaders understand that this issue is related to very significant elements of sovereignty. They understand that a country that can’t control its borders is, to that extent, a diminished country; and that citizenship in such a country is of diminished value.

That sentiment represents a preponderance of political opinion in America. But powerful elements in the media, in government, and in the country’s managerial class just don’t see it that way. They view public opinion on the issue as merely a political irritant to be circumvented in their drive to remake America.

Thus does the immigration crisis loom as one of the greatest contributing factors in the country’s ongoing, broader crisis of political deadlock.