Why Democrats Are Further Away From Impeachment Than Ever 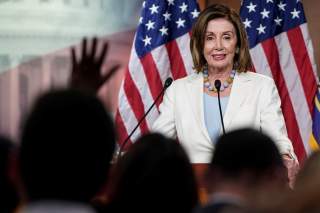 On Friday afternoon House Judiciary Chairman Jerrold Nadler (D-NY) filed a petition to obtain secret grand jury information currently redacted from the Mueller Report. With articles of impeachment under consideration, this informational probe is “in effect” the same as an impeachment inquiry, according to Nadler, who also called the information “critically important.” Next week Nadler is also expected to file a lawsuit to attempt to enforce a subpoena against former White House counsel Donald McGahn. But how significant are Nadler’s moves now that special counsel Robert Mueller’s testimony on Capitol Hill is widely acknowledged to have fizzled, left-wing activists such as billionaire and Democratic presidential candidate Tom Steyer are turning their attention back to climate change—and Congress is heading toward a six-week-long recess?

Fred Wertheimer, a veteran ethics activist and president of Democracy 21, believes Nadler’s move is only a cosmetic change to reflect changing party sentiments. “That’s what they’ve been doing since March. When they announced they would investigate three areas regarding the president: obstruction of justice, public corruption, and abuses of power. They have had articles of impeachment pending referred to the committee months and months ago . . . the investigation they have been conducting since March is the equivalent of an inquiry into whether they should consider impeachment,” he told the National Interest.

The highest-ranking Democratic supporter, House Democratic Caucus Vice Chair Katherine Clark (D-MA), is still only sixth in the leadership, showing the disparity within the party. This morning Speaker Nancy Pelosi (D-CA) sat down with freshman superstar Alexandria Ocasio-Cortez (D-NY) to repair the previous weeks’ rifts. Pelosi, withstanding attacks from progressives that she’s a white supremacist or inadequately progressive, has tried to put the brakes on opening an impeachment inquiry that she believes will damage Democratic election prospects.

“All these people have their public whatever and their Twitter world,” Pelosi declared, criticizing progressive intransigence against a compromise border bill. “But they [the “Squad”] didn’t have any following. They’re four people and that’s how many votes they got.” Now to preserve party unity, Pelosi has given members license to support impeachment as long as it does not threaten them electorally. During the 2018 midterms she had encouraged candidates to promise they would not support her for speaker, as long as it benefited them in their districts.

For Pelosi, retaining the House majority is everything. “We will proceed when we have what we need to proceed. Not one day sooner,” she said on Friday in her final news conference before the summer recess. “Everybody has the liberty and luxury to espouse their own position and to criticize me for trying to go down the path in the most determined, positive way.” She also said that she isn’t “trying to run out the clock on impeachment.” Maybe not, but it sure doesn’t look as though she trying to beat the clock, either.

Pelosi is acutely aware that while Mueller’s testimony has prompted several members of congress to impeachment, the public appears to have moved on from the investigations into President Donald Trump’s conduct. A Washington Post-ABC News poll conducted earlier this month found that 59 percent of Americans opposed impeachment. Viewership for Mueller’s testimony was thirteen million people—smaller  than the audience for former FBI Director James Comey’s hearing, for Trump lawyer Michael Cohen’s testimony, and for Supreme Court Justice Brett Kavanaugh’s confirmation.

Democrats who favor impeachment are thus running in place. They may have changed the wording of their investigations, but not their content. As the six-week summer recess nears, impeachment proceedings against Trump before the 2020 election appear as unlikely as ever. Meanwhile, Trump himself was jubilant over Mueller’s lackluster appearance on Wednesday, noting that Republicans had “a very good day today” and that there is “no defense of this ridiculous witch hunt.” Trump is now focusing on the upcoming election, bashing Fox News today for having the temerity to publicize its poll showing that former vice-president Joe Biden has a comfortable ten-point lead over him. There is “NO WAY,” he tweeted, that he could “be losing to the Sleepy One.” With Trump girding for battle, however, the 2020 election promises to be anything but soporific.