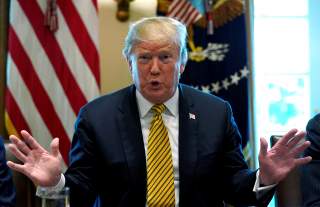 On Wednesday, the House Judiciary Committee, in a party-line vote, passed a resolution in favor of subpoenaing the full Mueller report. Attorney General William Barr has said the report could be released as soon as “mid-April,” with grand jury testimony, intelligence sources, and classified information redacted. House Democrats want the full report with no redactions to be made available to members of Congress, if not the public at-large. Republicans counter that it’s illegal for the Justice Department to release grand jury testimony and assert that Judiciary Chair Jerrold Nadler (D-NY) is asking Barr to break the law. Nadler has expressed his wish to work with Barr to get the full report without the use of a subpoena but threatened its use if his committee’s demands are not met.

The final skirmish from Wednesday is the one that will have the most staying power. While Chairman Nadler and House Intelligence Committee Chair Adam Schiff (D-CA) have been dominating the headlines, House Ways and Means Committee Chair Richard Neal (D-MA) has exploded onto the scene by announcing that his committee will seek to obtain President Donald Trump’s personal tax returns from the past six years, which the president has refused to divulge.

“Under the Internal Revenue Manual, individual income tax returns of a President are subject to mandatory examination, but this practice is IRS policy and not codified in the Federal tax laws. It is necessary for the Committee to determine the scope of any such examination and whether it includes a review of underlying business activities required to be reported on the individual income tax return,” said Neal’s letter to the Internal Revenue Service (IRS).

Neal emphasized that requesting Trump’s tax returns should not be interpreted as political maneuvering, but a step in the direction of revising the IRS’ oversight in the future. "My preparations were made on my own track and timeline, entirely independent of other activities in Congress and the administration. My actions reflect an abiding reverence for our democracy and our institutions, and are in no way based on emotion of the moment or partisanship. I trust that in this spirit, the IRS will comply with federal law and furnish me with the requested documents in a timely manner,” Neal told CNN.

On top of requesting Trump’s individual tax returns from 2013–2018, the committee is also requesting the tax returns for eight of his businesses from the same period. “Is that all?” the president said. “Usually it’s ten [years], so I guess they’re giving up.”

Will there be any evidence of Russian money laundering in Trump’s returns? While not publicly available, they’ve been in the IRS’ possession since before the presidential campaign and the agency has never brought forth any criminal activity. Neither did Special Counsel Robert Mueller, who it’s safe to assume walked down a similar investigatory path, find anything that could be considered proof of conspiracy with the Russian government.

President Trump’s tax returns, while not necessarily containing anything illegal, could prove to be embarrassing. The committee’s request specifically inquires if the returns have been under any audit, how long did the audit occur, and why did the IRS choose to audit in the first place. Since the beginning of the presidential campaign, Trump has claimed that his tax history was being audited and that it was not smart financially to release them at the time. He’s repeated this reasoning for almost three years, up to and including on Wednesday. “We’re under audit, despite what people said. And we’re working that out. I’m always under audit it seems. But I’ve been under audit for many years because the numbers are big and I guess when you have a name you’re audited,” said the president.

If the House Ways and Means Committee discovers that there was never an audit—as Trump’s former personal attorney Michael Cohen has stated—that would be a sizable lie perpetuated by the president both during the campaign and while in office. The release of his tax returns could also provide other detractive details, such as Trump’s charitable donations and the size of his wealth, both of which critics claim he grossly inflates.