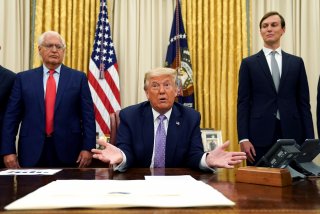 The Trump administration has pursued a bold foreign policy that has produced more successes than setbacks. However, strong diplomatic follow-through will be needed both to assure the permanence of these successes and to advance the foreign policy agenda even further. The maximum pressure campaign on Iran is an example of the kind of bold agenda item that needs the support of long term strategic diplomacy to fully succeed.

The administration has demonstrated that, in some areas of foreign policy, the U.S. can act unilaterally and expect other nations to follow. One example of this was the administration’s decision to move the U.S. embassy from Tel Aviv to Jerusalem, an action that set the stage for more progress in the region. The recent UAE- Israel peace accord, driven to a conclusion by President Trump, U.S. Ambassador to Israel David Friedman and Jared Kushner, is a remarkable achievement.

The president has also directed a maximum pressure campaign against Iran, but the clock may be running out on this attempt to change Tehran’s strategies and policies. On August 14, just one day after the historic Israel-UAE peace deal was signed, the United Nations Security Council voted against the U.S. resolution to extend the arms embargo against Iran. An unprecedented number of members abstained—France, Germany, and the United Kingdom among them. Only the U.S. and the Dominican Republic voted in favor of the measure. Undaunted, the president is pressing ahead with “snapback” sanctions to keep the embargo in place.

The disappointing vote shows that U.S. diplomacy is not keeping up with the president’s ambitious agenda. The State Department has scores of talented career officials and political appointees, but it is not enough.

Any successful future diplomacy, by this or another administration, will require both greater support from within the State Department and greater interagency backing to leverage sanctions in the broader statecraft arena.

Iran exemplifies the importance of linking interagency cooperation and strategy development. Sanctions are intended to punish and deny resources to the target nation as well as encourage better behavior. When the target nation, in this case Iran, is dedicated to challenging U.S. interests on the global stage, it is likely to be willing to endure more economic hardships than other, less committed foes. In such cases, sanctions perforce must be accompanied by highly creative and dedicated diplomacy.

Sanctions are not a strategy or a policy. They are just one tool to achieve an ends. The strategy and policy evolve out a comprehensive, integrated set of tasks. The fundamentals of international law are so nuanced, it requires multiple bureaus to unpack the complexities. If the U.S. wants to drive Iran to the table sooner to accept a more credible deal that will address the regime’s aggressive and destabilizing behavior, Washington needs to undertake a lot more diplomacy. Tehran must believe that, in the end, there is no way out from political and economic isolation and no hope of bullying its way to prominence in the Middle East. Currently, there is enough empirical evidence of this at the international level to goad Iran off its chosen path.

Clearly, the behind-the-scenes diplomatic work with the Europeans failed to deliver the desired result on the UN arms embargo vote.

Without question, the most disappointing aspect of that vote was the failure to gain support from the conservative government in the United Kingdom. Britain has a “deep state” problem of its own. The Foreign Office bought into the Iran Deal and, alongside France and Germany, remains committed to salvaging what is left of it.

The old foreign policy maxim remains true: Just because the U.S. thinks it is leading doesn’t mean that others will follow. In the 1960s, for instance, when Europe started leaning left, historians J. Robert Wegs and Robert Ladrech noted “Europe’s desire to pursue an independent foreign policy promoting a policy of détente, or increased understanding and contacts, between Western Europe and the Communist world.”

While many Western Europeans interpreted these trends as a cooling of the Cold War in Europe, the Soviets viewed the situation as an opportunity to drive a deeper wedge between the U.S. and its NATO allies, as well as shape the future of Europe more towards Moscow’s liking. Meanwhile, the U.S. found leading the free world to be a daunting task and ever challenging, until Ronald Reagan brought collective unity through both policy and diplomacy, organized around ending the Cold War.

From the Attlee and Churchill governments’ desire to sell jet engines behind the Iron Curtain to the dispute over Soviet gas pipelines through Western Europe between Thatcher and Reagan, the UK has often been a reluctant follower of U.S. leadership on sanctions – though not nearly as reluctant as Germany or most of the rest of the continent.

The re-imposition of U.S. sanctions will be significant in persuading UK exporters to avoid Iran. But, as Heritage scholar Ted Bromund argues, “U.S. sanctions like this are a blunt instrument to use on an ally, and there are reasons to be concerned that over-using the financial sanctions weapon, in particular, will in time reduce its effectiveness worldwide. That would be a catastrophe.”

This is where American diplomacy must take over. Conservatives in Parliament will, no doubt, campaign to pressure the government to be more aggressive on the Iran front. What’s required is a concerted, integrated diplomatic effort to help them move the ball.

There indeed is room for movement in British policy on Iran, but it will take time, as well as sustained U.S. and Parliamentary pressure to make the shift. Could we see a Huawei-style UK reversal on Iran? Yes, if our policy remains the same and if the administration—whether current or future—puts together a pointedly strong interagency team that follows the president’s agenda.

Ultimately, the U.S. should continue its pressure, but that pressure should not be limited to the Iran deal. It is always a good idea in a dispute, especially with a friend, to provide an off-ramp. We could achieve most of what we want by persuading the UK to state that Iran is systemically repressive under the terms of existing UN sanctions and that it will therefore reimpose sanctions akin to those abandoned under the JCPOA. While this will not be easy, it is one approach to make our argument to the UK in terms that they have already committed to accepting.

Getting the UK on board would go far toward breaking the diplomatic log jam with the Europeans. There are disputes with our European allies on multiple fronts, especially on the Iran issue, and it has seeped into other foreign policy issues. But diplomacy can start with Great Britain, one of the U.S.’ most trusted and historic allies. The U.S. and the British can find diplomatic inroads, and it’s most likely to come from robust transatlantic partnerships led by the U.S. The UK can lead Europe and meet the U.S. on various diplomatic fronts.

This is an agenda our current policy and diplomatic posture with the UK is tailor-made to address. In this term, the president did not have the interagency cooperation needed to deliver on all of his ambitious foreign policy goals. In a future administration, personal, retail statecraft must be matched with government officials figuring out the nuts and bolts of the current policy and undertaking sustained diplomatic engagement with allies and partners of their own. A cohesive, interagency strategy can deliver a stronger America, and an even bolder foreign policy.