Why Donald Trump's Impeachment Troubles are Only Temporary 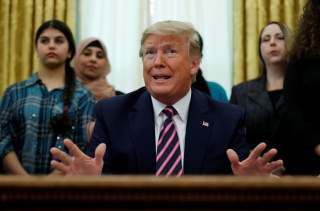 Chief Justice John Roberts was sworn in on Thursday to preside over the Senate trial of President Donald Trump as required by the Constitution. But what matters most is whether Senate Majority Leader Mitch McConnell is in control of the proceedings.

It’s the sign of the times that on the morning the Senate was to formally take up the matter of Trump’s impeachment that Twitter was all abuzz about an interaction between a cable news reporter and a Republican senator seeking a full term this year.

Both parties to the exchange almost certainly gained from it—Raju was celebrated by other journalists as a conquering hero in an era of Trump-era vitriol against the press; McSally could well open the MAGA fundraising floodgates amid a difficult campaign. But more importantly, it shows the political incentives for Republicans haven’t changed: stand by your president.

House Speaker Nancy Pelosi’s strategy of delaying the articles of impeachment predictably failed to influence the rules of the Senate trial. Her leverage over McConnell is nonexistent. But the headlines have been kind to the Democrats, as they hoped. The trial now kicks off as more details about the Rudy Giuliani clown show are trickling out into the public and the Government Accountability Office has issued a legal opinion that Trump’s Ukraine aid delay violated federal law.

Lev Parnas can still be easily dismissed as a Michael Cohen/Roger Stone fabulist and the GAO’s verdict isn’t exactly as compelling as a Supreme Court decision (and it is not as if the actions of previous administrations haven’t been ruled unconstitutional, even by the courts without impeachment ensuing). Nevertheless, public interest in the Trump-Ukraine debacle was starting to fizzle and the possibility exists that new revelations will rekindle it.

It would take a massive breakdown between Senate Republicans and the White House—and probably an even more dramatic shift in the underlying facts—to imperil Trump’s presidency. The Democrats’ machinations are designed to make a handful of Senate Republicans uncomfortable enough to break with McConnell on the trial rules to maximize the political damage an election year impeachment inflicts on Trump.

So far, that hasn’t happened. Not even Mitt Romney, Susan Collins or Lisa Murkowski have wandered off of the reservation, though all of them have expressed some degree of interest in hearing from witnesses and seeing more evidence. At the same time, all it would take is the defection of a few of them for McConnell to lose control, assuming the surviving red state Democrats stick with Chuck Schumer.

Then even if Democrats can’t get the votes to remove Trump, then they can try for the talking point that eluded Republicans during the impeachment of Bill Clinton: getting a majority to vote for conviction on at least one article of impeachment, even if it is well short of the two-thirds necessary to make Trump the first president actually booted from office via this process. Clinton was already safely in his second term. What would this do to Trump at the ballot box?

“One way or another,” Pelosi said, Trump will be out of the White House in ten months. She is also fond of noting that whatever happens, Trump will be impeached forever even if acquitted by the Senate.

McConnell will conduct the trial in a way that minimizes the damage to Trump and gets things over with as expeditiously as possible. He might not encourage Trumpian efforts to take it into unpredictable directions, such as seeking the testimony of Joe or Hunter Biden or letting Freedom Caucus members travel to the upper chamber in defense of the president. But keeping the GOP conference together could arguably take precedence and is unlikely to be spooked by Democratic claims that he is afraid to follow the evidence wherever it leads.

The Democrats are left hoping that there are enough Republicans—Never Trumpers, moderates, retiring senators with an eye toward the history books, embattled swing state incumbents with an eye toward reelection—who are more fearful of those claims than Trump tweets and a wrathful GOP base.