Why Hate Crimes Have Become Common in America 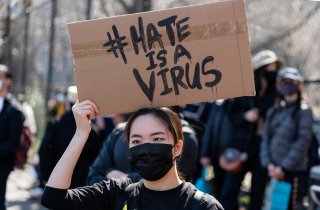 Following a series of fatal attacks on Asian massage parlors in the area of Atlanta, Georgia, in which eight people of Asian appearance were killed, President Joe Biden and Vice President Kamala Harris issued statements strongly condemning hatred and racism. While the backstory to these recent crimes remains unclear, and whatever role anti-Asian sentiment plays in this specific case, figures show that anti-Asian discrimination has been on the rise in the United States since the outbreak of the coronavirus pandemic.

According to a Pew Research Center survey, three in ten Asian-Americans (31 percent) report that they have been the subject of racial slurs or jokes since the pandemic began. The Stop AAPI Hate reporting center has also revealed that it received reports of 3,795 anti-Asian incidents between March 19, 2020, and Feb. 28, 2021. Although verbal harassment against people of Asian appearance accounts for the majority of these incidents (68 percent), 11 percent also involve physical assault. Chinese are the largest ethnic group (42.2 percent) that report experiencing hate, followed by Koreans (14.8 percent), Vietnamese (8.5 percent), and Filipinos (7.9 percent).

Why Prejudice Is Different for Asians

Asian immigrants to the United States are among the most successful high school and college graduates. About 49 percent of them hold bachelor’s degrees compared to 28 percent of the overall population. They also account for one-third of the participants in national math and physics competitions.

The major difference between the prejudice directed at Asians and the racism against Black Americans and other minorities is that anti-Asian discrimination is officially practiced and justified, including at American universities. While Black Americans enjoy favorable access to universities as a result of “affirmative action” measures, Asian-Americans suffer massive disadvantages.

In the admission test for Harvard University, for example, Asians need to score significantly more points than white students, and far more than Black applicants. At other universities, too, Asians are subjected to negative discrimination because they have to achieve significantly better results on their admission tests than all the other applicants. Only last year, the U.S. Department of Justice accused Yale University of discrimination against Asian Americans. A two-year investigation had revealed that Asian-Americans had worse chances of getting a place at university than Black applicants with comparable academic credentials.

The Socio-Psychological Causes of Prejudice Against Asians

According to the Model of (Often Mixed) Stereotype Content developed by the psychologist Susan T. Fiske and colleagues, affective and emotional reactions to social out-groups are primarily shaped by two dimensions:

The highest ratings for warmth and competence went to the in-group—the studies’ participants were predominantly white and middle class.

Jews, Asians and rich people were given very high scores for competence but very low scores for warmth.

The same researchers also examined which emotions were triggered by the stereotypes of these groups. High-competence and low-warmth groups, including rich people, Jews, and Asians, were met with mixed feelings of admiration and envy.

Researchers have also applied the Stereotype Content Model in numerous experiments examining stereotypes and prejudices against Asian-Americans. Asian-Americans are predominantly perceived by other Americans as being highly competent, but not very sociable. In a study published in the National Library of Medicine, the 1,296 participants most strongly associated the following traits with Asian-Americans:

Asian-Americans were also described as committing less time to socialization and as being less sociable in general than other groups of people. The study concludes that “Asians are thus the targets of resentful, envious prejudice: grudgingly respected for their presumed competence but disliked for their alleged lack of sociability.”

Prejudices against groups such as Asian-Americans are thus different from prejudices against other minorities, such as Black people. Asian-Americans, Jews and the rich are among those out-groups that inspire a mixed emotional reaction of “admiration, resentment, and envy.” In order to justify the rejection of such groups—whose abilities are undeniable—people base their negative sentiment on alleged “social deficiencies” (i.e. that members of the out-group are less sociable, etc.): “To justify discriminating against a high-achieving outgroup, stereotyping them as socially inadequate provides a ready excuse.”

It is absurd that in the United States, a country that extols the virtues of hard work and success, one group of people is being discriminated against precisely because they are so successful.

Dr. Rainer Zitelmann is a historian and sociologist. The Cato Institute has just published his book The Rich in Public Opinion