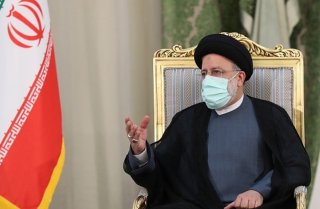 Back when Americans in June were so confident that another round of Vienna talks to revive Iran’s nuclear deal were imminent, the New York Times reported that a top American negotiator left his clothes in storage at a hotel in Vienna. The negotiations have now stalled between two sides, and his clothes have remained in Vienna after more than eighty days.

The former president of Iran, Hassan Rouhani, was frozen out of the process by Iran’s regime to resume the nuclear talks to revive the accord in the last days of his presidency. Since then, the Vienna talks were postponed in expectation of a new administration in Tehran.

Iran’s new president, Ebrahim Raisi, a deeply conservative disciple of the Iranian supreme leader, was elected as Iran’s eighth president with 61.95 percent of the vote in June, and he was inaugurated on Aug. 3, 2021.

“The sanctions against Iran’s nation must be lifted, and we support any diplomatic plan to realize it,” Raisi said in his inauguration ceremony in August.

While American diplomats had prepared to resume talks more than forty days ago when Raisi came to office, Iranian officials halted the negotiations while the new administration in Tehran filled its cabinet and determined its policies.

Iran needs the negotiations with the West to relieve the onerous sanctions that have hobbled its economy, which Raisi has made a centerpiece of his agenda. But Iran is not in a hurry to resume the Vienna talks, and analysts have little clue of Iran’s desire to negotiate quickly with major world powers.

Recently, the new Iranian foreign minister, Hossein Amir Abdollahian, has said that it will take two to three months for the new government to take office and plan for any decision

Some observers believe that Iran benefits from wasting time and is continuing to build leverage at the negotiating table by increasing its uranium enrichment and limiting the International Atomic Energy Agency’s (IAEA) access.

Moreover, some experts assert that Iran’s nuclear program is at the most advanced point ever for obtaining the ability to produce nuclear weapons, and the regime is planning to return to the deal with further delay, more bargaining chips, and an upper hand.

Unlike the former administration in Iran, Raisi’s foreign policy advisors are strong opponents of rapprochement with the West in line with Tehran’s anti-American ideology that formed after the Islamic Revolution in 1979.

The government’s foreign policy does not start from JCPOA, Joint Comprehensive Plan of Action, and will not be limited to the deal. After the Iranian presidential election in June, Raisi said in his first press conference that, “we do not tie economic conditions to negotiations.”

It seems that Raisi’s administration is trying to show that negotiating with the West is not a priority in Iran’s foreign policy agenda. Yet Iran’s unwillingness to resume talks has provoked reactions from world leaders, who have tired of waiting for negotiations to resume

“Iran should resume Vienna talks quickly to reach a conclusion and to put an end, without delay, to all nuclear activities that violate the (2015) agreement,” French president Emmanuel Macron told Raisi in a phone call on Sept. 5, 2021.

Additionally, Israel, Iran’s nemesis, has galvanized the global community against further Iranian delays in returning to the talks.

Iran is “dragging on, we must set a clear-cut deadline,” Israel prime minister Naftali Bennett stated in a meeting of the Israeli cabinet on September 12.

Furthermore, Israel has recently accelerated its plans to strike Iran and threatened clandestine attacks on Iran. In an interview with the Walla news website, Israel Defense Forces Chief of Staff Lt. Gen. Aviv Kochavi said that preparations for possible strikes on Iran are being intensified. He added that “a significant chunk of the boost to the defense budget, as was recently agreed, was intended” to minimize “Iranian presence in the Middle East.”

U.S. Secretary of State Antony Blinken has emphasized that time is running out for Iran to return the accord to salvage the Iran nuclear deal with world powers. Speaking in Germany, Blinken added, “I’m not going to put a date on it but we are getting closer to the point at which a strict return to compliance with the JCPOA (nuclear deal) does not reproduce the benefits that agreement achieved.”

On the other side, Iran says the country is ready to resume the talks, but a negotiation under pressure will not come to fruition. In an interview with Russia’s Izvestia newspaper, Iranian conservative politician Kazem Jalali reaffirmed Tehran’s determination to continue the Vienna negotiations on the nuclear deal but noted that the priority for Tehran remains the lifting of all U.S. sanctions, and not “negotiations for the sake of negotiations.”

“With the change of government, the Islamic Republic needs time to conduct the necessary research and make decisions in the new government,” he added

Jalali also stressed that “the other parties to the negotiations are expected to realize the complexity of the issue and the need for consideration and decision by the new Iranian government. The US government announced its readiness to begin negotiations two months after taking office.”

Also, Russian deputy foreign minister Sergey Ryabkov said that “Moscow was concerned over signals coming from Western capitals on the need to use political leverage on Tehran in order to restore the JCPOA, this is the wrong logic to employ.” Further, Russian news agency Tass reported that Ryabkov “stressed that it is necessary to treat the internal processes of the governmental overhaul as a result of the transit of power in Iran with respect and wait until a new negotiating team is formed in order to resume the suspended work on restoring the JCPOA in Vienna.”

Based in part on unofficial reports, Iran is working to determine the head of its negotiations team. There is a possibility that Iran’s Foreign Ministry will be frozen out from talks, like before Rouhani’s era, and Iran’s Supreme National Security Council will resume the negotiations.

Iran’s Keyhan conservative newspaper, whose director was appointed by Supreme Leader Ali Khamenei, has responded to questions about Iran’s delay in resuming negotiations by affirming that, “the Islamic Republic of Iran has not left the negotiations table, but the country is not in a hurry for that. Iran needs to review the negotiation method and strategy for resumptions of negotiations. The Islamic Republic has already negotiated six rounds in Vienna without obtaining specific results in practice. The review is time-consuming. Why should Iran be hurried while the negotiations for Iran have not achieved anything so far?”

Recently, the IAEA atomic watchdog criticized Tehran for stonewalling an investigation into Iran’s nuclear activities, and Iran in a deal accepted some monitoring work by IAEA inspectors. It is possible that further IAEA pressure and continuing economic problems will force the regime to resume the talks in the near term.

Although Iranian Foreign Ministry spokesman Saeed Khatibzadeh has announced that Iran will resume Vienna talks in the near future, the lack of a concrete timeframe for when negotiations will resume amounts to yet another delaying tactic.

For the Islamic Republic, the extension of the talks and delaying have not resulted in fears that Tehran will miss out on attaining key concessions from the West. Instead, Raisi’s foreign policy advisors believe that quickly insisting on salvaging the deal would undermine its positions in talks.

Thus, for Raisi’s administration, perhaps a late start along with a certain conclusion is better than a quick start without reaching its desired result. Nonetheless, while Iran thinks that delaying the nuclear talks with the major world powers to revive the JCPOA will give it the upper hand, it remains to be seen how long the West countries wait for Iran to rejoin it at the negotiating table.

Mohammad Javad Mousavizadeh is a journalist and analyst in international affairs and foreign policy. He has written many articles for digital publications worldwide, such as The Free Press, Khabar Online News Agency, Foreign Policy News, SNA of Japan, The Levant News, Eastern Herald, Modern Diplomacy, Menafn, MilliChronicle, and South Front. He is an English translator for Iranian newspapers and news agencies.