Why an Iran-U.S. Detente Could Still Occur Under Joe Biden 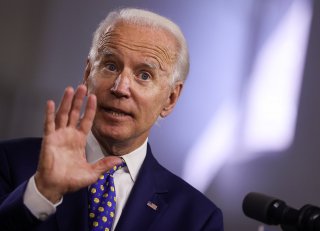 Over two years after the U.S. withdrawal from the Iran nuclear deal—known officially as the Joint Comprehensive Action Plan (JCPOA)—in May 2018, now the fate of the accord and more broadly the future of Tehran-Washington ties are commonly believed to heavily depend on the outcome of the U.S. presidential elections in November. Such a view derives from the idea that President Donald Trump’s reelection would mean the continuation of America’s “maximum pressure” campaign against Iran and ultimately the complete collapse of the JCPOA, while a Biden presidency could bring about a major change in Washington’s Iran policy and lead to de-escalation and detente. Relatedly, with public polling results increasingly favoring Democratic presidential candidate Joe Biden, there is a fervent hope that his potential November victory against Trump could open a new window of opportunity to reduce tensions with the Islamic Republic and save the nuclear deal.

Yet, few in Tehran seem to share this optimistic assessment. Reeling from what it perceives as the “failed” experience of grand negotiations with the United States under President Barack Obama, top Iranian leadership will likely exercise maximum caution and hindsight when it comes to dealing with an apparently pro-diplomacy American president. In other words, dealing with a post-Trump Iran will likely be more complicated than dealing with the pre-Trump Islamic Republic proved to be, even as Tehran embraces any reduction in American economic pressure.

In his latest public speech on July 31, Supreme Leader Ayatollah Ali Khamenei reiterated his unequivocal opposition to negotiations with the United States. “Negotiation means abandoning our regional power, nuclear industry and military deterrence, and if we don’t, there will be sanctions,” he said, explaining the key strategic reasons behind his strong aversion to talks. In Khamenei’s words, even if Tehran abided by Washington’s requests, the United States “would not be satisfied but make new demands.”

Khamenei’s argument for dismissing talks with the United States is in part a veiled response to the Democratic Party’s recently publicized foreign policy platform, which is seen as a roadmap for American diplomacy under Biden. The platform criticizes Trump’s approach towards the Islamic Republic, especially on the JCPOA, and pursuit of “regime change” in Iran, calling instead for “returning to mutual compliance with the [nuclear] agreement.” However, maintaining that the JCPOA was supposed to be “the beginning, not the end” of U.S. diplomacy with Iran, the document supports efforts to “extend constraints on Iran’s nuclear program” and address other issues related to Tehran, including “its regional aggression, ballistic missile program, and domestic repression." These are the same issues raised by Khamenei in his argument to demonstrate the detriment of a new diplomatic track with the United States. More precisely, both sides seem to have already started signaling their favorable rules of the game in an attempt to gain the upper hand in a possible future engagement.

Although Khamenei himself did not directly mention Biden or U.S. Democrats, hardliners close to him have been more outspoken. The ultra-conservative Kayhan newspaper, affiliated with the supreme leader’s office, has asserted that Biden’s “conditions” for returning to the JCPOA are no different from Trump’s demands. The influential outlet also contends that Democrats intend to utilize the JCPOA readoption as a source of leverage to persuade the Islamic Republic into accommodating a “stronger deal” with the United States which would favor the latter. Raja News, another conservative news outlet close to the Revolutionary Guards, echoed a similar point of view, urging vigilant attention to the notion that “Trump’s withdrawal from the nuclear deal was based on the political and legal grounds that Democrats [under former President Obama] left for the next president.” State-affiliated hardline media have also criticized and increasingly sidelined reformists for what some have framed as acting like an electoral “headquarters” for U.S. presidential nominee Biden.

Indeed, while a few reformist and moderate media outlets welcomed the Democratic Party platform with cautious optimism, other reformist figures gave a cold shoulder to Biden’s plan for diplomacy with Iran in general and resumption of American commitment to the JCPOA in particular. “The Democrats’ strategy is not an unconditional return to the JCPOA, but it is conditioned on a change in the Islamic Republic’s domestic and foreign policy,” prominent reformist journalist and former political prisoner Ahmad Zeidabadi wrote in an op-ed titled “The Illusion of a Biden Boon for Iran,” tacitly confirming Kayhan’s critical perspective. Abbas Abdi, an intellectual leader of the reformist camp, goes even further, arguing that “all in all, Trump’s [Middle East] policy is in some ways better than that of Democrats, given, among other things, that [his administration] has not carried out any direct [military] intervention” in the region.

As such, a deeply cautious, even cynical, perception of the utility of talks and plausibility of substantive change under a potential Biden administration is what the main political camps in Iran increasingly converge upon.

Other singular reasons also decrease the likelihood of a softening in Iran’s stance on game-changing JCPOA-calibre negotiations with the United States, even if Democrats win the November 2020 presidential vote. On August 9, members of the six-nation bloc Gulf Cooperation Council (GCC) wrote a letter to the UN Security Council, espousing the U.S. initiative to extend a UN-mandated arms embargo which has prevented Tehran from importing and exporting conventional weapons and which will expire in October, as per the JCPOA. In the face of likely vetoes by China and Russia, which seek closer partnerships with the Islamic Republic, the Trump administration will probably set in motion its Plan B to kill the accord once and for all and activate the snapback mechanism that, if successful, would reimpose all erstwhile UN sanctions resolutions against Tehran that were abrogated under the nuclear deal

Iranian feelings of hopelessness about the viability of a reliable rapprochement with Western powers are becoming so entrenched that Tehran has started to take significant steps to develop ties with China and Russia into comprehensive “partnerships” in what is widely seen as a strategic shift to the East.

The political disincentives and threat perceptions notwithstanding, Iran is expected to exhaust any chance short of major compromise to secure sanctions relief from a potential Democratic administration in Washington and its allies in Europe. In this light, the idea of lifting U.S. nuclear sanctions in exchange for Tehran’s return to “a number of their commitments,” as proposed by senior Biden foreign policy advisor Jake Sullivan, might gain some traction with the Iranian leadership, as long as it steers clear of non-nuclear sources of tension. “We should not hold hostage nuclear diplomacy for the sake of regional diplomacy, but we should think about ways in which there are linkages that can push both of them forward,” he said at the Center for a New American Security on August 5. The Biden foreign policy team hopes to use nuclear de-escalation with Tehran as a stepping stone to fostering a “modus vivendi” between Iran and its regional rivals, a more realistic approach that might go down well with Ayatollah Khamenei and the Revolutionary Guards, which directly oversee Tehran’s regional strategy and are willing to mend fences with Saudi Arabia and other Sunni Arab states.