Biden Foreign Policy Advisor: Here’s How We Would Fix the Iran Deal 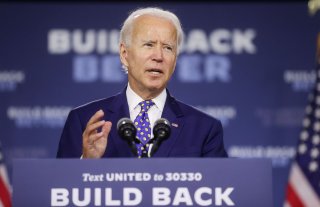 The United States should return to a nuclear deal with Iran in order to work out a “modus vivendi” between Iran and its neighbors, senior Joe Biden foreign policy advisor Jake Sullivan said.

The Trump administration had left the 2015 nuclear deal with Iran, known as the Joint Comprehensive Plan of Action, arguing that the agreement had allowed Iran to get away with malign behaviors across the Middle East that were unrelated to its nuclear research program.

Sullivan, who has long advised Biden and now helps lead his foreign policy team, made it clear that Biden will try to close the nuclear file as a prerequisite for dealing with the other issues if he is elected President.

“I don’t think there’s anything inconsistent with finding a path forward on nuclear diplomacy early next year” which “then sets the stage for a negotiation over a follow-on agreement,” Sullivan said at a Wednesday event hosted by the Center for a New American Security.

He did not explicitly say that he supports a return to the 2015 deal, but talked about a scenario in which “we provide sanctions relief to Iran in 2021 in exchange for them returning to a number of their commitments.”

Anthony Blinken, another senior Biden advisor, has explicitly committed to rejoining the 2015 deal if Iran is willing.

The deal had lifted international economic sanctions on Iran in exchange for limiting Iranian nuclear research. The Trump administration broke from the deal by imposing new economic pressure in 2018.

“We should not hold hostage nuclear diplomacy for the sake of regional diplomacy, but we should think about ways in which there are linkages that can push both of them forward,” he said.

“When we first got engaged in this, our friends in the Gulf repeatedly said, ‘do not make the regional issue a central negotiating point…because if we’re not at the table, we’re on the table,’” claimed Sullivan, who worked on the initial nuclear negotiations as a State Department official and then White House staffer. “The regional track has to be led by the regional actors.”

The Center for a New American Security hosted a panel discussion about the left-leaning think-tank’s new report on Iran after Sullivan’s speech.

Panelists disagreed on whether rejoining the 2015 nuclear deal would be possible.

Kelsey Davenport, director for nonproliferation policy at the Arms Control Association, called a return to the 2015 deal a “best case” scenario that is “certainly possible.”

She said that the Joint Comprehensive Plan of Action was a “strong and effective agreement.”

But Mark Dubowitz, chief executive of the Trump-adjacent Foundation for the Defense of Democracies, vowed to stop a return to the deal if Biden wins.

“Republicans will strongly oppose any return to the JCPOA. Israel will lobby against it,” he said. “We who oppose the JCPOA will rally against it.”

Editor's note: This article originally referred to the Foundation for the Defense of Democracies as a “Trump-aligned” organization.

Toby Dershowitz, the Foundation's senior vice president for government relations and strategy, wrote in an email to the National Interest after this article was published that "FDD is an independent organization. We are not aligned with any party or administration.”

The description has been updated to refer to the Foundation as “Trump-adjacent.”