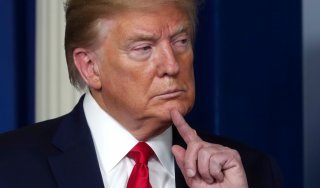 A group of fifty experts and former officials signed a letter on Thursday asking U.S. President Donald Trump to “double down” on economic sanctions against Iran.

European diplomats and U.S. lawmakers have criticized sanctions for hindering Iran’s ability to fight the novel coronavirus disease (COVID-19) pandemic, and Iran is now asking for a $5 billion International Monetary Fund (IMF) loan to make up for a budgetary shortfall. But the letter argues that U.S. pressure is not a major obstacle to Iran’s public health response.

“U.S. sanctions neither target nor prevent the supply of food, medicine, or medical devices to Iran,” the letter argues. “While your maximum pressure campaign has seriously weakened the Islamic Republic’s ability to generate revenue to support its malign activities, the clerical regime is still able to draw on billions of escrowed oil dollars to fund the importation of humanitarian goods.”

The writers conclude that “now is the time to double down on the maximum pressure campaign to force the mullahs [Shi’a Muslim clergy] to spend their money on the Iranian people, not their nuclear ambitions, imperialism, and internal oppression.”

A recently-leaked intelligence briefing from the U.S. Air Force claims that U.S. sanctions have “left Iran bereft of financial resources to mount an effective public health response” and warns that local civilian workers on U.S. bases in countries bordering Iran could infect Americans.

Josep Borrell, the European Union’s chief diplomat, asked the Trump administration to “soften the sanctions” and allow the IMF loan at a Wednesday press conference.

The Thursday letter, however, notes that Iran “has rejected offers of assistance from independent organizations such as Doctors Without Borders, making clear that its complete control of Iranian society outweighs any concern the regime has about COVID-19 running rampant.”

The letter also points out that “Supreme Leader Ali Khamenei has access to billions of dollars in his own business empire” and Iran’s sovereign wealth fund. The Islamic Republic has recently tapped the latter fund to pay for both military activities and coronavirus relief.

Democratic presidential nominee and former Vice President Joe Biden has called the maximum pressure campaign a show of “cruelty,” although his specific recommendations mirror “humanitarian channels” already created by the Trump administration, as the letter points out.

Many of the signatories are major movers and shakers for the Trump administration’s Iran policy.

Twenty-two of the signatories are affiliated with the Foundation for Defense of Democracies, an organization that has played a prominent role in promoting the administration’s Iran policy. One of them, Richard Goldberg, simultaneously served as an official in the National Security Council and a senior advisor for the Foundation from 2019 to 2020.

Four other signatories—Frances Townsend, Mark Wallace, Joe Lieberman, and Kelly Ayotte—are senior members of United Against a Nuclear Iran, a group that has helped shape Republican policy on Iran.

Another signatory, Michael Doran of the Hudson Institute, hosted a January talk on regime change with the deposed crown prince of Iran. Doran had previously played a role in the Trump administration’s shift from a pro-Kurdish to a pro-Turkish policy in Syria.

One of the signatories, Dov Zakheim, is vice chairman of the Center For The National Interest.