The Crown Prince of Iran Pitches Regime Change to Washington 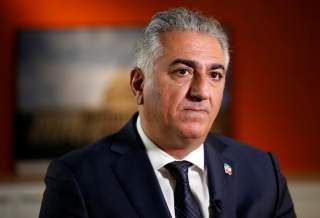 Former crown prince Reza Pahlavi doesn’t want to be king of Iran—but he does want to help plan a military coup d’etat.

Pahlavi called for elements of the country’s elite Revolutionary Guards to “peel away” from the regime to “facilitate a smoother transition based on my strategy of nonviolent civil disobedience.”

He pitched his plan to turn Iran into a “multiparty system” at an event hosted by Mike Doran, a senior fellow at the hawkish Hudson Institute. Hawks around the Trump administration, including former National Security Advisor John Bolton, are pushing for a full-throated endorsement of regime change. But they have not presented a well-developed alternative to the present-day theocratic Islamic Republic.

Enter the heir to the ancien regime, who claimed to speak for the “silent majority that cannot openly state it back home but would like me to use this platform.” But he refused to reclaim the throne.

“I’d like to be on this side of the fence, facing the authorities and defending people’s rights so that we can establish a true democracy rather than to be in a position of governance or authority, having to be accountable to the people,” he told the National Interest. “I don’t see that as my role.”

When asked why his voice is relevant if he is no longer claiming the throne, Pahlavi told the National Interest, “that you would have to ask the people of Iran.” It is unclear what he was referring to.

Pahlavi painted a picture of Iran on the brink of collapse—and presented his plan as the only way to manage the coming “implosion” with a “minimum of casualties.”

The former crown prince said that the atmosphere in the country reminds him of “the last three months in 1978,” before his own father was overthrown.

“I, for one, have been constantly increasing my dialogue with people inside Iran, people who can be the forces of change in terms of administrative skills,” Pahlavi said. “People who, obviously under the circumstances, are forced to work and operate under the radar because they cannot prematurely be exposed. So, they can be components to fill in that gap.”

He asked the international community to finance a “strike fund” to allow Iranian workers to shut down the country, and told the Trump administration to continue its campaign of maximum economic pressure—with the explicit goal of taking down the Islamic Republic.

Pahlavi, who lives in Maryland, said the Iranian people will “tighten the belt” if they realize the “sacrifice that people in Iran have to endure in terms of economic hardship” is in fact “part of their deliverance.”

Regime-change advocates in Washington have seen their fortunes rise, fall, and rise again at whiplash speed. President Donald Trump ordered the assassination of Iranian Maj. Gen. Qassim Suleimani on January 3 but claimed that “Iran appears to be standing down” after Iran fired a dozen missiles at a U.S. base in Iraq.

The State Department reportedly ordered its diplomats on January 7 not to meet with members of the Mojahedin-e Khalq, a controversial former military group that presents itself as an Iranian government-in-exile, as well as a Kurdish separatist group.

But the Iranian government admitted to accidentally shooting down Ukrainian International Airlines Flight 752 amidst the chaos—after bungling a cover-up of the accident for three days.

University campus vigils for the 176 victims on Flight 752 turned into widespread protests against the government. No one has been reported dead as a result of a government crackdown, unlike in November, when security forces killed hundreds of people in response to widespread working-class protests.

Pahlavi claimed that the re-emergence of slogans calling for the downfall of the regime shows that “some aspect of fear has dissipated.”

The State Department seems to take the same assessment, and it reportedly revoked the ban on meeting Mojahedin-e Khalq members less than a week after issuing it.

Now the department is flirting with royal restorationism—its official Twitter account posted a nostalgic video about Pahlavi rule a few hours before the Hudson Institute event.

The Pahlavi dynasty began in 1921 when a Persian Cossack officer named Reza Khan overthrew the older Qajar dynasty in a coup d’etat. He styled himself “Reza Shah Pahlavi”—after a medieval Persian empire—and ruled until 1941 when an Allied invasion force expelled Nazi advisors from Iran and forced the pro-German shah to abdicate.

His son, Mohammad Reza, took the throne, along with the title “Light of the Aryans.” The younger Pahlavi briefly fled the country after losing a power struggle with nationalist Prime Minister Mohammad Mossadegh in 1953. He was reinstated by a CIA-backed military coup shortly after.

Mohammad Reza reportedly shouted “I knew it! They love me!” when he learned of the coup’s success.

“I leave it to the historians to determine what it was, but usually a coup is from below to the top, not from the top-down,” the younger Pahlavi told the National Interest, insisting that there was “no determining mechanism” to say that his father’s order for the military to depose Mossadegh was unconstitutional.

The Pahlavi dynasty banned political parties in 1975, and Amnesty International chair Ivan Morris reported that “Iran has the worst record of political repression in the world” in a speech about torture the following year.

But the Pahlavi dynasty finally fell in 1979, when anti-U.S. revolutionaries threw out Mohammad Reza and installed the present-day theocracy. The shah died of cancer in an Egyptian hospital in 1980, but his exiled eldest son, Reza II, continues to be called Crown Prince of Iran by some—a title that earned a nod in the Hudson Institute’s promotional materials.

“The majority of people who were against my father’s regime said, ‘let the Shah go, then we’ll see what happens.’ Well, guess what?” Pahlavi said at the Hudson Institute. “We don’t want to be caught in the same unpredictability again.”