Why Nationalism Will Win the Twenty-First Century 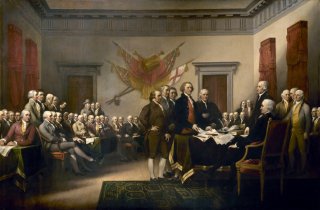 THE TWENTY-FIRST century is the era of the nation-state. Today there are 193 members of the United Nations General Assembly, even though at the time of its formation, the UN had only fifty-one members. Where did those 142 members come from, in the last seventy-seven years? The new states were formed from the partition of former European empires like the British and French Empires, the disintegration of the Soviet Union, which was the successor state to the Romanov Russian Empire, and in some cases, like those of Yugoslavia and Sudan, the disintegration of post-colonial successor states into even smaller states.

Many of the post-colonial successor states have inherited the borders of former empires, sometimes drawn deliberately by European colonial administrators to split some ethnic nations and throw others together, as part of divide-and-rule schemes. As a result, many post-colonial countries in Africa and the Middle East—like Pakistan, Afghanistan, Iraq, Syria, Nigeria, and others—lack any ethnonational majority and have often been held together by dictatorships of one kind or another. In some cases, entire ethnic nations like the Kurds and Roma find themselves with no nation-state of their own, scattered as tolerated or abused national minorities among a number of countries.

In spite of all of this, most post-imperial successor states are less ethnically diverse than the former empires as a whole, and many fit a broad definition of a nation-state, in which a majority, though not necessarily all, of the citizens belong to a common linguistic and cultural community whose members may but do not necessarily share a common ancestry.

Paradoxically, the global triumph of the more culturally homogeneous nation-state over the polyethnic empire as the dominant form of territorial organization in the world has been matched by the repudiation of the very idea of the nation-state by most prominent Western intellectuals. I have been studying and writing about nations and nation-states for more than three decades. In that time, almost all academics and public intellectuals in the United States and Europe who write about nationalism have rejected the nation-state as evil, anachronistic, or both.

THE ANTI-NATIONALIST consensus comprises otherwise different groups on the political spectrum from Left to Right. The Western Left appears to be almost unanimous in its hostility to the nation-state as an institution. You might suppose that liberals and leftists would defend the nation-state. After all, from the revolutions of 1848 until the period of decolonization after World War II, most liberals cheered the replacement of European empires and royal autocracies by independent nation-states whose citizens could choose their own leaders. Socialists as well as liberals were anti-imperialists for most of the twentieth century.

But in the last few decades, the nation-state has come into bad odor, particularly among Western scholars. Some of these academics promote a philosophical version of cosmopolitanism like Peter Singer (Martha Nussbaum has renounced her earlier ethical cosmopolitan philosophy). Other liberals hope that the sovereignty of nation-states can gradually be eroded by supranational institutions like the European Union and by doctrines like the “responsibility to protect” which, by allowing outside powers to invade countries with illiberal or undemocratic regimes, weakens the post-1945 prohibition against aggressive war.

For their part, most contemporary Western leftists view national boundaries as illegitimate, either on the basis of a crude version of Marxism—“workers of the world, unite!”—or because they view world politics through the lens of domestic antiracism: “The border line is the new color line.”

Another anti-nationalist faction is made up of centrist neoliberals and right-wing libertarians. Their view of the world is shaped by free-market economics. Countries are impediments to free flows of goods, services, labor, and capital. Commerce-obstructing borders should be eliminated, or at least made as porous as possible. In the neoliberal-libertarian utopia, countries would have no more moral or political significance than zip codes. States are sweatshops or shopping malls, to be invested in or abandoned, as global capital chooses.

On the Right, there are reactionaries nostalgic for the glory days of European empires, when invaders in pith helmets machine-gunned “natives” and looted their resources—for the good of the natives, or so they would have us believe. Some “TradCaths” on the Right idealize the Habsburg Empire as the most recent version of medieval Catholic Christendom before it was disrupted by the Reformation and later by nationalism. Unlike the one-world Left or the global market Center, the defenders of imperialism on the Right at least can point to a model of government that was predominant in much of the world for much of recorded history.

WHAT EXPLAINS the triumph of nationalism over imperialism? The sociologist Ernest Gellner argued that the need for mass literacy gave nationalists an opportunity to spread “the national idea.” But it may be doubted that a world that industrialized under, say, Confucian Chinese or Roman imperial auspices would have been based on sovereign nation-states, merely because of mass literacy and the printing press.

Explanations that attribute the worldwide spread of nationalism to the influence of the West are more persuasive. The immediate cause of postwar decolonization was the shared opposition to European colonial empires of the two most powerful states, the United States and the Soviet Union. And beginning with the American and French Revolutions, the idea of national self-determination, paired with the idea of republican self-government, had undermined monarchical empires, first in Europe and then throughout the world.

In his book The Virtue of Nationalism, Yoram Hazony claims too much for ancient Israel as an inspiration for modern nationalist movements. But there are deep strains of anti-imperialism and anti-royalism in both of the major traditions that contributed to modern Western civilization: the Judeo-Christian and the Greco-Roman. For example, in 1 Samuel 8, Western Christians could read the prophet Samuel’s warning to the Hebrews when they called for a king:

With a few exceptions, like the Persian Empire under Cyrus, who restored exiled Jews to their homeland, the reputation of kings and empires in Judaism has not been high, and this skepticism was bequeathed to Christians, even in nominally Christian monarchies and empires.

Europeans and Euro-Americans also inherited a deep suspicion of empire and monarchy from Greek democracy and Roman republicanism. Classically-educated elites read of how the tyrannicides Harmodius and Aristogeiton saved Athens from monarchy and how the Romans overthrew the Tarquin kings and established a republic. Indeed, the very word “king”—Rex in Latin and Basileus in Greek—was so tainted in Roman tradition that the emperors preferred the alternate term Imperator, or commander. The idea that the people of Rome had delegated their powers to the emperor was fossilized in the Roman Lex Regia; it was natural for Europeans influenced by the classics to wonder whether the people could revoke the grant.

None of this might have mattered if the Byzantine Empire had regained control of Western Europe and endured, or if there had arisen a centralized neo-Roman empire in the West, in the way that Chinese central government was repeatedly restored under new dynasties. But from Charlemagne to Napoleon and Hitler, all efforts at uniting most or all of Europe under a single empire failed. The historian Walter Scheidel, in his book Escape from Rome, attributes the scientific, technological, and commercial innovativeness of early modern Europe to its disunion and the military and economic and cultural competition among rival states, which might have been squelched in a stagnant continental empire. In the words of Tennyson: “Better fifty years of Europe than a cycle of Cathay.”

While superior technology and organization, forged in centuries of intra-European warfare, allowed the British, French, and other European empires to expand worldwide, these very empires helped to delegitimate empire as a form of government when they promoted movements of national self-determination to undermine their imperial rivals. Imperial, royalist France intervened in the American Revolution to secure national independence for the former British colonists. Imperial Britain in turn benefited from the secession of the Latin American republics from Spain, and during World War I encouraged Arabs to revolt against the Ottoman Empire. During the same war, Imperial Germany encouraged Muslims in British territories to rebel against British imperial authority, while Irish nationalists often viewed the French or German enemy of Britain in favorable terms (on May 3, 1945, the Irish leader Eamon de Valera called on the German ambassador in Ireland to express his condolences on the death of Adolf Hitler). During the Cold War, the United States called for the liberation of the “captive nations” of the Soviet bloc, while the Soviets sponsored nationalists seeking independence from Britain, France, Portugal, and other colonial powers. In the First Indochina War, the United States reluctantly backed the French Empire, but squelched the attempt of the British, French, and Israelis in 1956 to seize the Suez Canal from the radical Nasser regime, which had nationalized it.