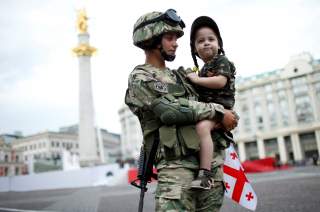 The Bigness of Smallness

In an era of great power competition, “small” matters a good deal. Little nations are not sand to be ground between the great wheels of major powers. They are made up of people, not pawns. Citizens in small states have the same hopes, aspirations and natural rights as those in world powers. These people have every reason to expect and demand a life of freedom, peace and prosperity.

Further, it is in the interests of bigger states to help small states flourish. Great powers, if wise, will support the best hopes of smaller states.

There are three reasons why the United States, in particular, ought to take small states seriously.

1. Geography Matters. In geopolitics—as in real estate—a critical consideration is “location, location, location.” To a major power, a country’s greatest asset might be its map coordinates rather than the size of its arsenal or bank account.

Geography matters when it comes to economic integration, transportation, energy distribution and physical security. Even in a digitized world, the freedom to move people, goods, and services across physical space is a valuable commodity.

Recognizing the importance of connecting dots on the ground is not an argument for hardened spheres of control (such as during the Cold War) or carving up the world (like seventeenth-century mercantilists). On the other hand, there is a case to be made for building bridges between like-minded nations that want to live together with surety in commerce and share peaceful borders.

Thus, a small state in the right place can be very important to a big power. Iceland is a case in point. Even though it has no armed forces, the island’s location makes the nation a lynchpin in transatlantic security. That’s the reason Iceland was included as one of twelve founding members of the North Atlantic Treaty Organization.

Without question, Iceland’s strategic location is of far greater importance to U.S. security than the state’s size and resources would suggest. Washington should be working hard to make that bilateral relationship even stronger.

Part of the reason NATO continues to keep the membership door open is because there are nations still not included whose accession would enhance collective security due to their location. These include Macedonia, Georgia, Ukraine and Kosovo.

And there are states in other regions where stronger bilateral relations would greatly serve U.S. interests. Closer ties with Bangladesh and Sri Lanka, for example, would further U.S. efforts to sustain a free and open Indo-Pacific.

2. Freedom Matters. Like-minded nations make better partners. One of the reasons NATO works is because the alliance is a partnership of free nation-states.

The foundational rationale of the transatlantic alliance is that free states have the right to associate for the purpose of collective security. To close NATO’s open door would undermine what NATO stands for: the right of free peoples to choose their future.

Likewise, achieving a free and open Indo-Pacific requires an open door for like-minded states big and small that share that goal. So, for example, though the United States strongly supports the diplomatic initiative known as the “Quad”—an effort by Japan, Australia, India and America to foster freedom of the seas and respect for international norms—these strategic partners ought to roll out the red carpet for other interested nations to participate in the dialogue.

Furthermore, in the Middle East, the Trump administration has floated the notion of a more formal string of partnerships to which small nations could freely associate. In particular, the United States has reached out to the members of the Gulf Coast Cooperation Council, illuminating the value of freely cooperating nations banding together in the common cause for the good of the region.

3. Contribution Matters. Small nations can be net contributors to peace, security, and economic development. For instance, one recent painful reminder of that was the three brave Czech soldiers recently died in Afghanistan shouldering the burden along with their American allies.

The administration’s National Security Strategy recognizes that America is a global power with global interests and responsibilities. Implementing that strategy requires a sure and steady effort to assert American interests and promote stability in three key regions: Europe, the Middle East and the Indo-Pacific. Even with all its power, America can’t be strong enough in all three places all the time without firm friends, allies and strategic partners.

Therefore, small powers can help shoulder the burden by adding significant additional capability. In Afghanistan, for example, several small nations—Georgia notable among them—more than carry their weight. Another example is Croatia, which recently purchased a wing of F-16s. That will give this small a country a serious capability to support regional air policing missions.

In addition to military assets, small countries can contribute basing and infrastructure. They can also add to regional economic growth and integration—as well as energy supply diversification—strengthening the neighborhoods in which they live. Croatia’s development of a liquid natural gas terminal, for example, could be an important contribution to regional energy security.

The United States has an inherent advantage over adversarial powers in partnering with small nations. China and Russia don’t have allies. They have underlings. No country wants to be a suburb of Beijing or Moscow.

America, however, has to up its game. Here is a ten-step process to get the job done.

Step 1. Set the Right Objectives for Friends. In reducing vulnerabilities of friends, allies and strategic partners to adversarial influences, American objectives should be framed less in driving particular political outcomes or agendas (e.g., promoting marriage equality) than in achieving good stable governance, strong institutions and a reduction in corruption. This will make our partners more resilient and self-confident.

Step 2. Avoid Us-or-Them-ism. The goal of a small-state strategy is not to exclude adversarial competitors. For example, America can’t ask countries not to do business with China. After all, the United States does business with China. The goal is not to get countries to takes sides but to engage and help them act consistent with their own interests—eschewing, for instance, economic engagement detrimental to national security or that undermines the rule of law and good governance.

Step 2. Promote Economic Freedom. China and Russia can buy influence because, in poor nations with weak governance, a little money goes a long far. The best way to make these states more resistant to malicious influence is to help them become wealthier and better governed. This is best accomplished by promoting economic freedom.

Step 3. Enter Free Trade Agreements (FTA). Trade agreements fundamentally have to be about liberalizing trade and making markets freer. That said, prioritizing agreements with states where the United States is seeking friendship, and common cause makes sense. America, for example, ought to have an FTA with Tunisia.

Step 4. Be There. In many small, like-minded nations, all the United States has to do to win friends is, simply, to be there. Too much American engagement rests on foreign assistance and not enough on building human-to-human relationships and a more robust presence by the U.S. private sector.

Step 5. Build a Better BUILD Act. The BUILD Act was supposed to make U.S. economic engagement, assistance, and promotion of private sector investment better tools for competing with China and Russia. That would be super helpful for implementing a small-state strategy. Unfortunately, the BUILD Act contains serious flaws which might just turn it into another bloated, unaccountable government give-away initiative. The act definitely needs fixing.

Step 6. Expand People-to-People Exchanges. One good example of where America has fallen short in this area is the government’s failure to expand the Visa Waiver Program which promotes tourist and business exchange between nations. The U.S. goal ought to be to include all its friends and strategic partners in this program which promotes more secure travel, as well as encouraging like-minded nations to strengthen bonds of commerce and culture.

Step 7. Promote Essential Institutions. Of course, it’s better if America’s partners are strong, resilient free societies. Part of a small-state strategy has to be helping protect democracies from external malicious influences. The United States should seek to assure the resilience of institutions and infrastructure (like electronic voting systems) that are critical to U.S. friends, allies, and strategic partners and which face significant risks. China and Russia use both disinformation and active measures to exercise sharp power. Sharp power is a strategic threat, and Washington needs to have specific objectives to counter the worst of China and Russia’s strategic meddling.