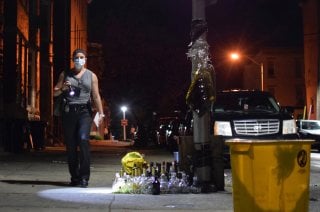 When the sun disappeared, Baltimore disappeared. Its skyline and buildings still existed but the city was gone. Its stores were closed. Its lights were out. Its residents went missing. Only the most wayward of souls wandered around in the dark in search of the more-affordable-than-usual sins of the night. At the city’s crime scenes, the tempo and tone of the evidence recovery process had also changed. Police had begun wearing N95 masks to protect themselves from a deadly virus that had killed more than one hundred thousand people across the globe, from a disease that could easily be hiding on a gunshot victim’s unwashed hands, on his assailant’s discarded face mask, or inside the city’s citizens. Even the detectives donned masks as they followed a blood trail and searched for evidence and the crime lab technicians wore masks while taking pictures, collectively creating a hauntingly surreal environment. This dystopian sight paired together with the new restrictions surrounding the coronavirus, which limited travel after daylight, had transformed Baltimore into a veritable Pripyat—the Ukrainian city that was evacuated on April 27, 1986, following a nuclear energy disaster at Chernobyl Nuclear Power Plant. 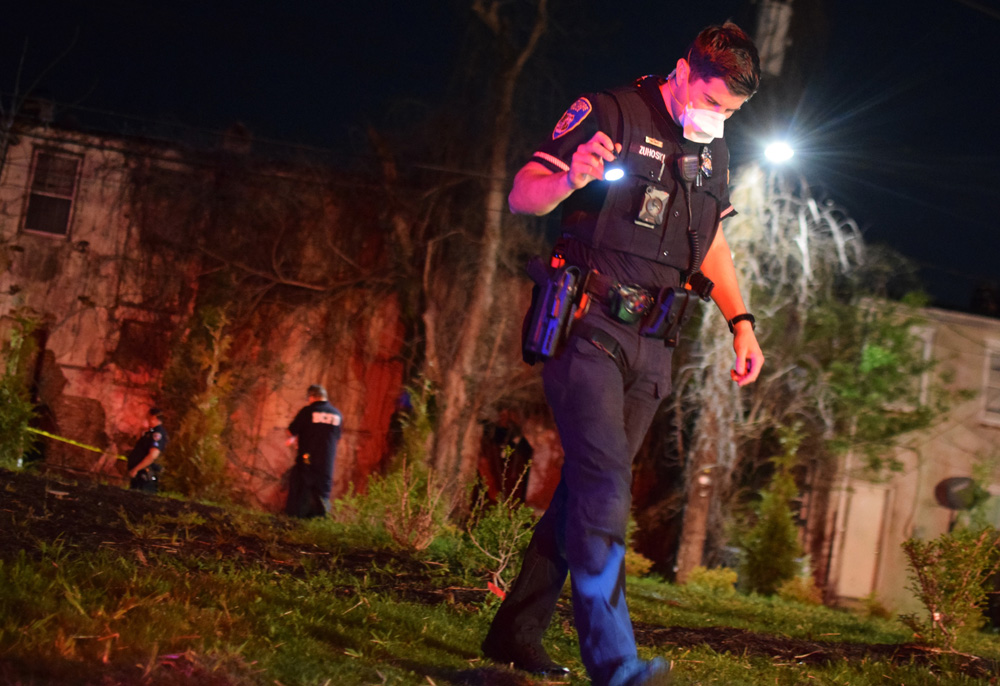 On Wednesday, I ventured out of my house with my bicycle at night for the first time to take pictures of police investigating a shooting that had occurred in another part of the city; that’s when I realized that I was standing in the middle of an exclusion zone.

There were two shootings that occurred that night. The day before I decided to ride my bicycle through the exclusion zone, I had been washing my laundry at the laundromat on Pennsylvania Avenue. I was regretting that decision because the laundromat was a bit crowded and far too many of its customers were acting as if a worldwide pandemic wasn’t happening. While I was waiting for my load of laundry to stop spinning in circles, I studied the elderly lady who spent every day keeping the laundromat clean and organized until it closed. She could sometimes be mean, especially if a customer showed up with a load of laundry after she had started trying to shut down the laundromat for the night. She had sometimes been mean to me. There wasn’t anything I could do about it though. The other laundromats were too far away for someone intent on reducing their health risk. It was already a journey to haul my dirty clothes down the street in a plastic bin mounted on top of a collapsible dolly. I wasn’t looking at her with animosity though. I was deeply concerned. She had a medical mask designed to prevent a person from spreading disease but she didn’t have anything that would protect her from someone who might carry the disease into her workspace. Perhaps she was aware of that fact and that’s why she was sitting on a plastic milk carton next to the door—for access to fresh oxygen. I wanted better for her. I wanted her to be able to quit her job and stay home where she was less likely to be exposed to the virus. But then, when I looked at the situation again, I also felt glad that she still had a job when so many people across the country had lost their steady source of income overnight. What if she was alone in the world and that laundromat was her salvation?

And while some things hadn’t changed enough, other things had changed too much, too fast—so quick that the mind reeled from disbelief that “old America” was gone and “new America” was still undefined. No one knew what new America would look like once the proverbial radioactive fires had stopped burning in this modern-day version of Chernobyl, once the plants and animals had been tainted with radionuclides.

On the same day that I washed my laundry, I also watched firefighters battle a blaze on the west side of the city. Some of the people who had ventured out of their homes to watch them extinguish a fire that had consumed the top floor of a house appeared aware of what those around them might expose them to. Few of them wore protective masks but most of them clearly tried to keep their distance from strangers. The same cultural habits were still in play though. The police gathered in a cluster beneath the glow of the flames to talk about the drama of the day. Only one officer donned a white N95 mask and he was alone at the end of the street doing his best to prevent cars from driving over the firehose. The firefighters, too, approached their task in the usual manner. They wore no protective masks beneath the pale light of a full moon and battled the bright yellow flames, undaunted. 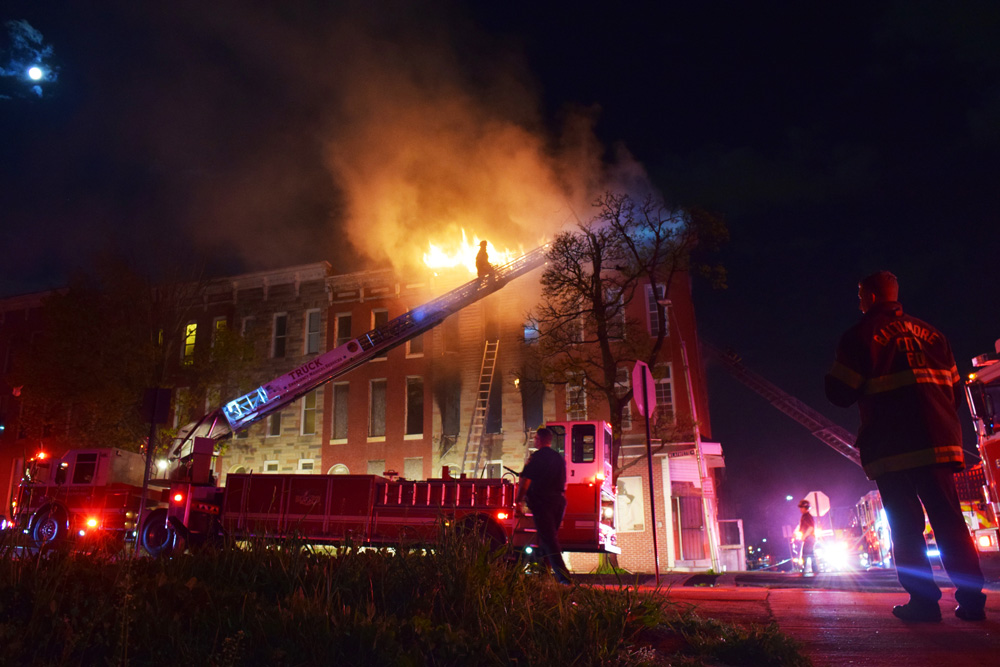 That was Tuesday. By Wednesday night, everything had changed.

Every first responder who arrived to investigate the two shootings on Wednesday night wore an N95 mask as they scoured the area in search of evidence. Suddenly, the grim task of recovering facts had become far grimmer because, in new America, the evidence that supported those facts could prove to be poisonous. The coronavirus could be lurking on a gunshot victim’s clothes, on the money he dropped as he fled from his assailant, on the shiny shell casings left to roll with the wind across the street. It could easily hitch a ride with an unsuspecting officer or follow a detective home. The marked change in their approach to the evidence recovery process occurred less than a week after an officer had become infected with the coronavirus, prompting the Baltimore Police Department to shut down the substation where the officer worked. The Police also hired a biohazard response team to scrub down every patrol car associated with it. The officers at the crime scenes were thinking ahead of their viral opponent; I wasn’t. I was still living in old America. I wore no mask. I used winter gloves and not disposable gloves, and mostly because the skin on my knuckles had begun to crack from a combination of exposure to the winter elements and the number of times I had washed my hands as I tried to adjust to new America. I wore them every time I rode my bicycle, which was my primary mode of transportation during the age of the coronavirus after I quit using the public bus system in an effort to avoid the obvious health risks. It was yet another adjustment to new America; it was yet another step away from the old one. 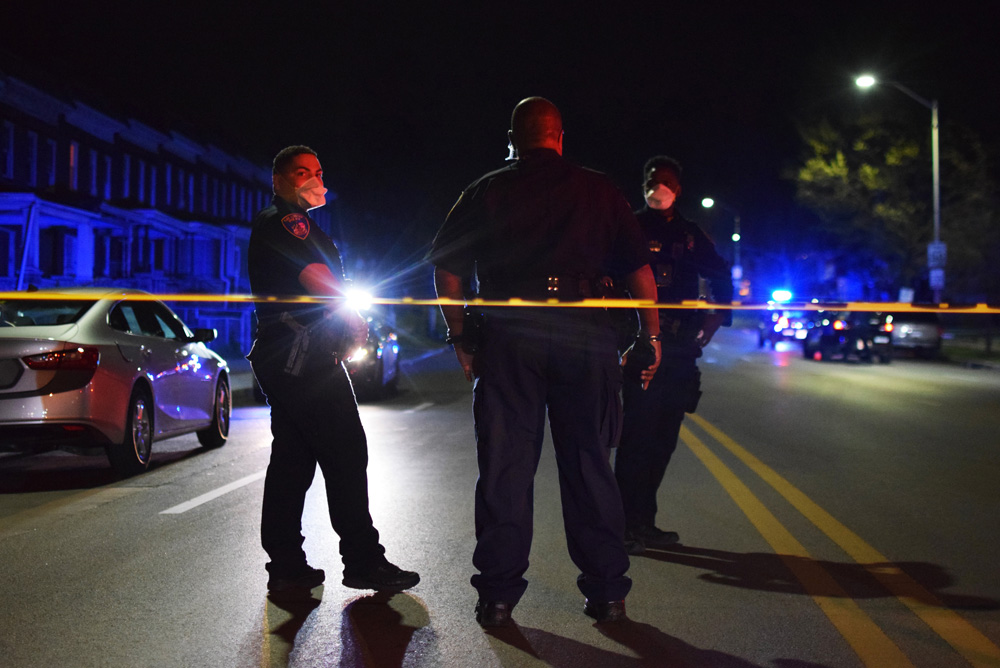 I thought about all of that later that night, at home, as I washed the dirt off my skin, as I scrubbed my face with soap. I had touched the ground with my hands many times; I had touched the camera many times and then pressed it against my face as I lay on the ground next to the street curb taking pictures of the police trying to piece together one of two violent crimes. That was the formula for contamination; it was the pathway towards death. I was going to have to come up with a different plan. 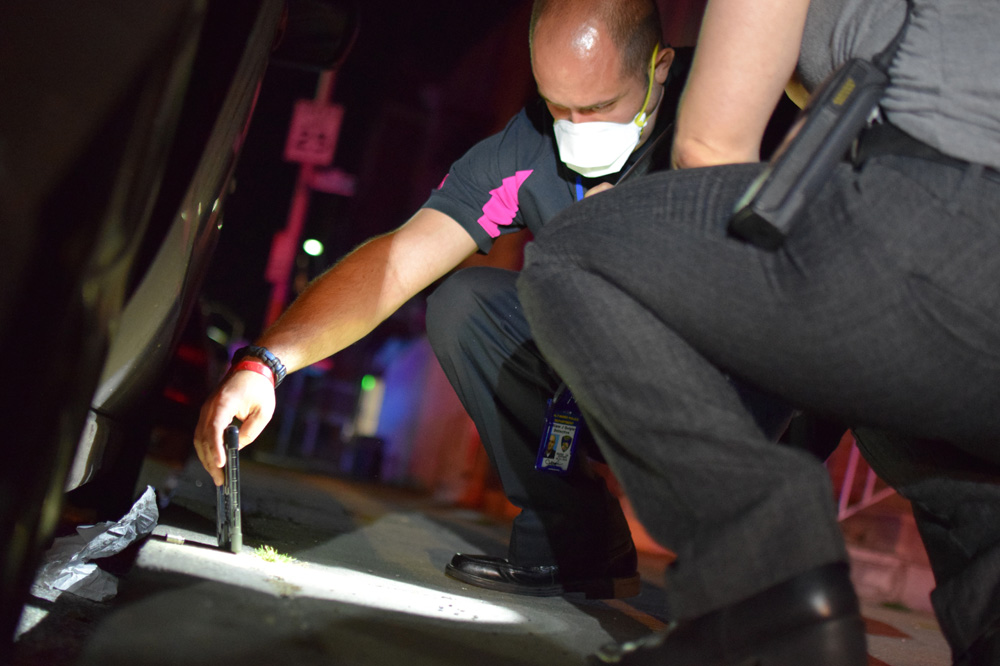 Fifty miles away, in Washington, where Baltimore was rarely a blip on the radar, President Donald Trump had begun hosting almost-daily press briefings about the pandemic. He had described the virus as an invisible enemy and dubbed himself a “wartime president” who was determined to save the country—even though he couldn’t save America from what it was becoming. He gave small-worded speeches about the destroyed economy preparing for a rebound because he needed it to rebound in time for the next presidential election. He dazzled the cameras with misleading statements that his own administration officials had to “clarify” and chip-on-the-shoulder verbal clashes with reporters. It was the best of ratings; it was the worst of times. And yet, despite what was unfolding in front of him across the country, despite the frightening uncertainty, thousands of deaths, and mass graves, he preached normalcy as if he knew it was a drug the American people couldn’t live without.

And maybe they couldn’t. Worse, maybe the definition of “normal” was evolving.

That remained unclear on Friday, as Baltimore’s police officers were reacting to multiple ATM thefts in two of the poorest neighborhoods on the west side of the city. At least four ATMs had been stolen from the small liquor stores and grocery stores that served as the lifeblood of the communities in those neighborhoods. Three of the ATMs had been taken during brazen thefts that occurred during business hours, while employees were still working, sometimes protected by bullet-proof glass, while potential witnesses were around to watch the bold abduction of the massive money machines. In a city known for its bouts of violent crime and poverty, would aggressively reckless crimes become the new normal? It was too soon to know. 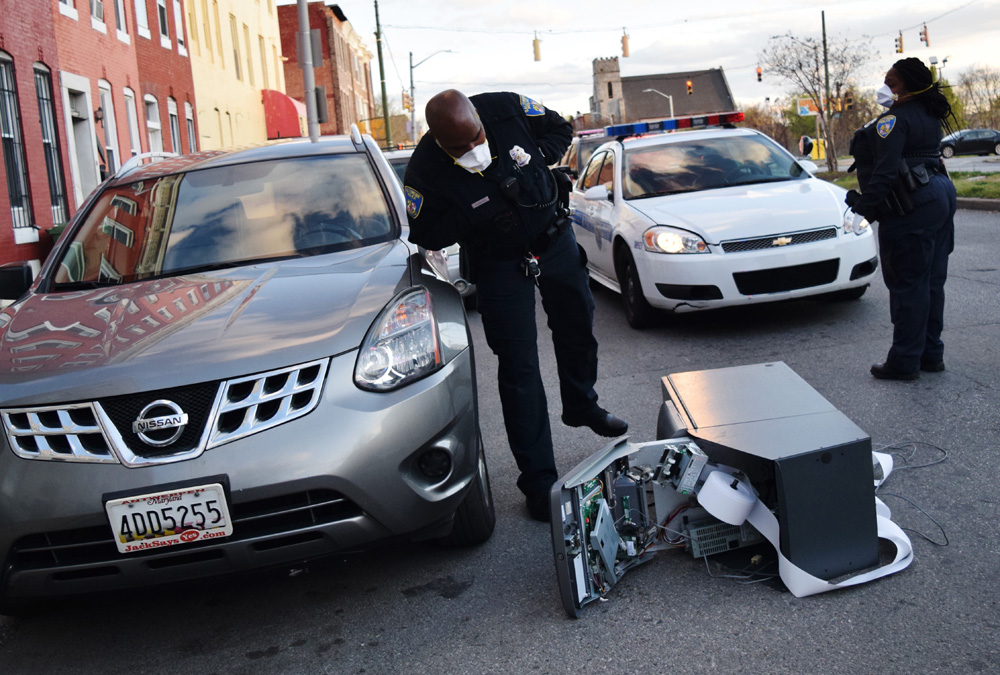 The following day offered little stability and another shooting. West Baltimore, on Saturday night, was once again at the epicenter of an evolving nationwide enigma about how to solve crime in the shadow of a deadly worldwide pandemic. This time I doused my hands in hand sanitizer before taking pictures of the detectives and crime lab technicians, cringing as the alcohol seeped into the tiny cracks in my skin. I knew it wasn’t good enough and that perhaps I would have to accept the fact that nothing would be. And as I watched the lights from the emergency response vehicles flicker across the detectives’ faces, I couldn’t help but notice the sharp contrast between the way they used their flashlights to find evidence to solve another violent crime and yet remained incapable of finding a way out of the cruel environment they’d been pushed into. Old America was gone and no one was fully prepared for what would come next.