Why the North Korea Problem Is Far Worse Than You Think 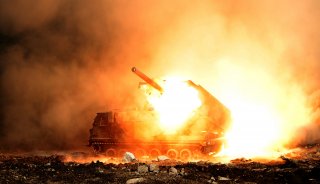 Editor's Note: In our latest Facebook Live interview (please like our Facebook page to see more of these events) Harry Kazianis, Director of Defense studies at the Center for the National Interest, sat down with Dr. Bruce Bennett, a Senior Defense Analyst at the RAND Corporation, to discuss the costs and implications of reunifying the two Koreas.

On a related topic, TNI’s defense editor, Dave Majumdar, wrote an article on why a preemptive strike on North Korea may not be as easy as one thinks. An excerpt of the article can be found below:

If the United States were to attempt to launch a preemptive strike on North Korea, the regime in Pyongyang could do significant damage to both South Korea and Japan—not to mention U.S. bases in those nations.

One the reasons previous U.S. Administrations have left the volatile nuclear-armed hermit kingdom alone is because of the sheer destructive power the Kim regime might unleash in the event of war. Indeed, it would be South Korean and Japanese civilians who would take the brunt of Pyongyang’s wrath in the event of war.

“If there is a war, there is no way the U.S. can prevent massive damage to South Korea and significant damage to Japan,” Vasily Kashin, a senior fellow at the Center for Comprehensive European and International Studies at Moscow’s Higher School of Economics told The National Interest. “It would be a humanitarian disaster and a shock for global economy. There are some 24 to 25 nuclear power plant reactors in the South. The North has these hundreds of missiles which are hard to stop.”

Indeed, Pyongyang’s missiles could hit most of Korea and Japan—and it is possible that North Korea might have enough weapons to saturate U.S. and allied missile defenses. “2000 SRBM launchers—that includes KN-02, Scud and the Nodong,” Jeffrey Lewis, Director of the East Asia Nonproliferation Program at the James Martin Center for Nonproliferation Studies at the Middlebury Institute of International Studies at Monterey told The National Interest. “That means several hundred Scud and Nodongs.”

North Korea’s extended range Scuds have a roughly 1,000 km range while the Nodong can hit targets as far away as 1,200 km. Lewis said that Pyongyang’s missiles might have some reliability issues, but there are enough of them to do very significant damage to South Korea and Japan. Indeed, North Korea is building the extended range Scud for the express purpose of having more missiles available. “The ER Scud is designed to be a cheaper alternative to the Nodong, so that North Korea can build more missiles,” Lewis said.