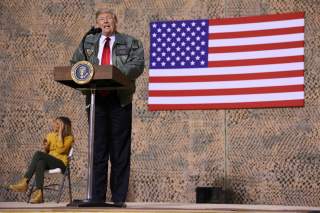 Over a period of mere days in late December, the Trump administration made two troop withdrawal decisions that startled Washington. The first was announced in a tweet by Trump stating that the United States had accomplished its mission in Syria of defeating ISIS and that he was ordering the immediate withdrawal of U.S. troops from that country. Just days later, leaks from both the White House and the Pentagon indicated that a substantial draw-down of forces from Afghanistan was imminent. Some reports suggested that 7,000—roughly half of the current deployed U.S. force—would be removed.

The reactions were predictable. Advocates of a more realistic and restrained American foreign policy praised the moves as a key step in jettisoning two frustrating and counterproductive missions. A larger faction, consisting of neoconservative hawks along with liberal proponents of humanitarian military crusades, condemned Trump’s actions. They often did so in emotional and vitriolic terms about undermining crucial American interests in both countries. A frequent assertion was that the president’s Syria withdrawal would hand over that country and much of the Middle East to Vladimir Putin. Matt Purple, managing editor at the American Conservative, observed correctly that the Washington foreign policy establishment was in full meltdown over the troop withdrawal. Indeed, Secretary of Defense James Mattis mentioned the president’s decisions as one reason for his abrupt resignation.

The latest lurch in Trump’s foreign policy views and actions reflects an all-too-familiar inconsistency and volatility. During the 2016 presidential campaign, he condemned the missions in both Syria and Afghanistan (as well as those in Iraq and Libya) as impractical ventures that had wasted American treasure and lives. But once in office, Trump’s actual policies regarding those countries did not change in any significant way. In August 2017, he explicitly embraced and even escalated the Afghan mission. He not only kept U.S. troops in Syria, but he twice launched missile strikes against Bashar al-Assad’s regime for its alleged use of chemical weapons. Just a few months ago, he warned Assad against attacking the last major rebel stronghold in Idlib province or risk U.S. military retaliation.

Similar erratic moves took place with regard to other foreign policy arenas. Trump began his administration with an uncompromising, highly confrontational policy toward North Korea. He then reversed course and held a cordial summit meeting with North Korean dictator Kim Jong-un. During the election campaign, Trump repeatedly described the North Atlantic Treaty Organization (NATO) as “obsolete” and sharply condemned the lack of burden-sharing on the part of the European allies. Within weeks after taking office, he walked back many of those criticisms and asserted that the Alliance still played an extremely important role. He also sent Vice President Mike Pence and Secretary of Defense Mattis to the annual security conference in Munich to reassure the allies in rather effusive terms.

A similar reversal has taken place with regard to policy toward Russia. Trump initially stated that he wanted friendly relations with Moscow and implied that the Obama administration had needlessly damaged bilateral relations. Indeed, his accommodating attitude fueled ugly allegations that he was Vladimir Putin’s puppet. Yet the notion that the Trump administration has pursued an appeasement policy toward Russia is a bizarre myth. Trump’s actions have been noticeably more hardline than Obama’s. Not only has the current administration expelled more Russian diplomats and imposed harsher economic sanctions, but other moves have been extremely provocative. U.S. troops have participated in NATO military exercises at an increased pace, and in one case did so within a few hundred yards of Russia’s western border. In addition, the U.S. security relationship with Ukraine has escalated sharply—a very sensitive development from Moscow’s standpoint. Washington is training Ukrainian military personnel, conducted joint exercises with Kiev’s forces, and approved two major arms sales.

The multitude of policy zigs and zags seems to constitute a case of a president suffering from foreign policy bipolar disorder. Yet a pattern may exist amidst all of the turmoil. Trump’s foreign policy instincts often appear to be a sound and refreshing contrast to the stale conventional wisdom that has led the United States to careen from one interventionist debacle to another over the past quarter-century. (His early hostile stance toward North Korea and his policy toward Iran at all times are the major exceptions to sound instincts.) But time and again Trump has allowed his advisers to talk him out of his initial (usually correct) positions. That’s not surprising. The president is not an avid reader about foreign policy (or apparently anything else), and his knowledge base is alarmingly shallow. That deficiency gives policy advisers an exceptional degree of influence.

If Trump sought out qualified advocates of a foreign policy based on realism and restraint, the consequences flowing from his own intellectual limitations would not necessarily be all that negative. But he has been surrounded by utterly conventional thinkers (Mattis, McMaster, Pence) or ultra-hawks (Bolton, Haley, Pompeo). In such an environment, his worthwhile instincts often wither and his worst inclinations become more pronounced.

The abrupt Syria and Afghanistan troop withdrawal decisions may be simply another volatile episode. Ideally, they are manifestations of badly needed, overdue policy changes. However, given the undesirable reversals that have occurred on other foreign policy issues during Trump’s presidency, we should not bank on the United States extricating itself from those two quagmires until the last troops arrive back on American soil.