Will American Aid to Ukraine Provoke a Russian Nuclear Strike? 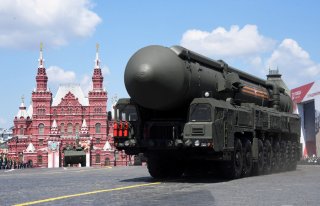 On September 15, Russian president Vladimir Putin and Chinese president Xi Jinping convened a joint strategy meeting in Samarkand, Uzbekistan at the annual summit of the Shanghai Cooperation Organization, which they formed back in July 2001. The Islamic Republic of Iran was accepted at this meeting as a full member of the alliance, which already includes India, Pakistan, Kazakhstan, Kyrgyzstan, Tajikistan, and Uzbekistan, while Belarus may soon follow. The alliance boasts over 42 percent of the world’s population (as compared to only 12 percent for NATO) and 30 percent of its gross domestic product (GDP) by purchasing power parity. Putin previously stated the meeting would have special significance because they will discuss how Russia and China can better support each other with regard to Russia’s continuing war in Ukraine and China’s plan to reunify with Taiwan by force, if necessary, within the next year or two.

This historic summit is taking place shortly after Ukrainian forces took advantage of its seldom discussed two or three-to-one quantitative advantage in troops to recapture more than 2,300 square miles of territory in their counteroffensive which has driven Russian forces from most of Ukraine’s Kharkiv oblast. This offensive, along with Ukraine’s failed Kherson offensive which has cost the lives of up to 3,000 Ukrainian soldiers thus far, was reportedly planned and coordinated with U.S. and NATO military leaders. This Ukrainian military success will almost certainly result in some form of Russian military escalation in the coming weeks.

Senior U.S. and NATO officials have warned Russia may resort to the use of tactical nuclear weapons following their recent battlefield setbacks in Ukraine. In an interview with Business Insider, Brigadier General Kevin Ryan (USA Ret.), a former defense attaché to Russia and senior fellow at Harvard’s Belfer Center for Science and International Affairs, echoed a point that I made in a previous article. He suggested that the most likely scenario for Putin to use nuclear weapons against Ukraine would be if Putin were to follow through on his stated plans to annex some or all of the Ukrainian territories Russia has conquered, and Ukraine was successful in taking a substantial part of them back. Ukraine’s commander in chief, General Valery Zaluzhny confirmed this possibility stating,

There is a direct threat of the use, under certain circumstances, of tactical nuclear weapons by the Russian armed forces. It is also impossible to completely rule out the possibility of the direct involvement of the world’s leading countries in a ‘limited’ nuclear conflict, in which the prospect of World War III is already directly visible.

On September 21, Putin announced a major escalation of the war in Ukraine, including full support for the popular referendums being held in the Russian-occupied Ukrainian oblasts of Donetsk, Luhansk, Zaporizhia, and Kherson from September 23-27 as a prelude to their formal annexation to the Russian Federation. He also announced a partial Russian military mobilization for the first time since the end of World War II, calling up 300,000 reserve troops which will give Russia rough numerical parity with Ukraine in troop numbers for the first time in the past six months. Finally, he warned Ukraine and the West that Russia would not hesitate to utilize its nuclear arsenal, if necessary, to defend the territorial integrity of Russia (including its newly-annexed Ukrainian oblasts) from renewed NATO-backed Ukrainian counteroffensives.

Four months ago, I warned that the more the U.S. helped Ukrainian military forces to be successful on the battlefield, the greater the chances that Putin would resort to the use of tactical nuclear weapons to win a convincing victory in Russia’s war in Ukraine. If Ukrainian forces continue to retake substantial amounts of Russian-held territory with Putin facing likely defeat, the chances of Russian nuclear escalation could increase. I also predicted that a Russian use of battlefield nuclear weapons could end up being Putin’s “trump card” to win the war because the Biden administration would be extremely unlikely to respond to a Russian use of tactical nuclear weapons against Ukraine, a non-NATO state, with a U.S. nuclear response. In fact, President Biden would presumably not engage in a direct military response against Russia at all, knowing that doing so would result in an outbreak of World War III with Russia (and potentially China), which he has repeatedly stated he would like to avoid.

Rather, Biden would likely react by sponsoring a UN General Assembly resolution condemning Russian nuclear use as well as increased economic sanctions against Russia while trying to de-escalate the conflict and mediate an end to the war in Ukraine. Biden might also respond by increasing the number of U.S. troops deployed to NATO’s frontline states in Eastern Europe. However, while a Russian nuclear escalation against a non-nuclear state like Ukraine would undoubtedly result in wide-ranging international condemnation, it would also terrify some of NATO’s frontline member states, potentially fracturing the unity of the transatlantic alliance and reducing its support for Ukraine due to the fear of provoking Russian nuclear strikes against them as well. It would also likely serve to increase Russian prestige and enable Putin to use the credible threat of nuclear blackmail to spur former Soviet republics to return to Russia’s orbit rather than risk suffering a similar fate as Ukraine.

Yet despite that Biden’s director of national intelligence, Avril Haines, and director of the Central Intelligence Agency, William Burns, warned that Putin could use nuclear force if Russia either fell substantially short of reaching its military objectives in Ukraine or appeared to be losing the war, Biden has still sought to ensure Russia’s defeat. Accordingly, if Russia does escalate to the nuclear level in response to this U.S.-assisted Ukrainian battlefield victory, it will be the Biden administration’s failed Ukraine war policy that will be chiefly to blame. Given that the only vital U.S. national security interest in the war in Ukraine is to avert a Russian nuclear escalation, it would be far wiser for the Biden administration to assiduously act to avert additional escalation rather than continue to pursue a war policy that will likely provoke such escalation.

Western leaders claiming Russia is on the verge of losing the war in Ukraine and Putin’s control over Russia is somehow threatened following Ukraine’s surprisingly successful Kharkiv offensive are mistaken. The bottom line, which U.S. leaders need to understand and accept, is that Ukraine has no real chance of winning this war. For even if the Ukrainians succeed in retaking all of their lost territory from Russia, Putin could employ tactical nuclear weapons to defeat them in accordance with Russia’s “escalate to de-escalate” military doctrine or declare war on Ukraine and fully mobilize its two million reserve troops to overwhelm Ukraine’s defenders and compel its surrender. This realization should motivate U.S. leaders to do whatever is necessary to incentivize Ukraine to negotiate a peace deal with Russia to end the war as soon as possible.

In 2000, I declared that the driving principle of twenty-first-century U.S. national security policy should be to divide and disrupt the burgeoning Sino-Russian military alliance. Unfortunately, the current U.S. strategy of fighting an undeclared war against Russia in Ukraine is driving Moscow and Beijing toward a military alliance, rather than driving a wedge between them. This is fundamentally in opposition to U.S. national security interests and the Biden administration’s own 2022 National Security Strategy, which is reportedly focused on great power competition with China.

As the danger of war with Russia and China continues to increase, the United States still has not formulated a nuclear deterrence strategy to successfully deter, let alone win, a simultaneous war against both nuclear powers. As Admiral Richard, commander of U.S. Strategic Command, has stated, it is imperative that the United States rethinks its nuclear strategy to do so. Many U.S. leaders have demonstrated a galling ignorance of what the actual impact of the use of tactical nuclear weapons would be. They claim that any such use would inevitably lead to “the destruction of the world”—no matter how few were used, how limited their yield, whether they were used to target civilians or military targets, or even how the United States responded to their usage. They mistakenly believe that Russian political and military leaders share the Western hypothesis that nuclear wars cannot be won, dismissing any potential Russian or Chinese usage of nuclear weapons as an act of national suicide, and wrongly assuming that the United States can safely fight Russia and China in direct military conflicts with minimal risk of nuclear escalation.

However, the truth is that Russian leaders believe that nuclear wars, and particularly, limited nuclear wars, can be fought and won by the side that best prepares to fight them. In fact, no country in the world is better prepared to fight and win a nuclear war today than the Russian Federation.  Russia has 3,300 strategic nuclear warheads while the United States has 1,515 operational and 2,000 partially dismantled strategic nuclear warheads, which could not be restored to active service until six to twenty-four months after the issuance of an executive order to do so. Furthermore, while the United States is increasing its ability to produce nuclear warheads to as many as eighty a year, former Defense Intelligence Agency Director Lt. Gen. Robert P. Ashley, Jr. stated in 2019 that Russia had ramped up its nuclear production capabilities to enable it to build a few thousand warheads a year. Meanwhile, China is building up its nuclear arsenal to over 4,000 strategic nuclear warheads. Admiral Charles Richard, who serves as commander of U.S. Strategic Command, estimates its nuclear buildup will be substantially complete by early 2024.