Is Nuclear Use in Ukraine Inevitable? 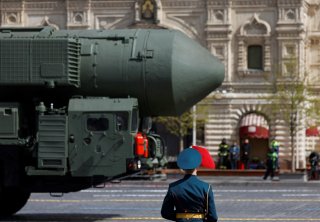 A number of well-respected national security professionals, including former Assistant Secretary of Defense Graham Allison, CIA director William Burns, and Director of National Intelligence Avril Haines, are beginning to sound the alarm that the Biden administration’s decision to fight an undeclared proxy war against Russia is greatly increasing the chances that Russian president Vladimir Putin will resort to the use of tactical nuclear weapons in Ukraine. Indeed, Allison estimated that if the Armed Forces of Ukraine successfully recaptured a substantial portion of Russian-held territory in Ukraine, the chances that Putin would resort to the use of tactical nuclear weapons would increase to approximately 75 percent. For their part, Burns and Haines respectively warned that Putin could use the nuclear option if Russian military forces either fell substantially short of reaching their objectives in Ukraine or appeared to be losing the war. Given that the Biden administration's avowed goal in arming Ukraine is to cause Russia to lose the war in Ukraine, it appears that the Biden administration’s policy is raising the risk that Putin will escalate to the nuclear level.

President Joe Biden recently admitted his administration’s policy has left Putin with no viable face-saving exit strategy, and that he would try to think of a way to change that. Needless to say, a Russian escalation to the nuclear level would constitute a colossal failure of U.S. and NATO policy, which thus far has essentially provided Ukraine with a “blank check” of billions of dollars in Western military assistance to wage war with Russia in perpetuity.

After Russia withdrew from northern and northeastern Ukraine early last month, a number of military analysts predicted that Putin would try to achieve a military victory in the Battle of the Donbas and then declare a ceasefire and end the war before Russia’s Victory Day parade on May 9. However, the Russian military fell well short of meeting that deadline, and Putin’s Victory Day address neither included a declaration of war against Ukraine nor an announcement that Putin was mobilizing Russia’s military industries and manpower reserves of nearly two million soldiers. While it is still likely that Putin will engage in a limited military mobilization in order to achieve his military objectives—including the seizure of the remainder of the Donbas region in eastern Ukraine—if he is successful, he may order the Russian military to stage a follow-on offensive to capture the remainder of Ukraine’s Black Sea coast, including their most important port city of Odessa. This would link Russia directly to the Russian-backed separatist republic of Transnistria in eastern Moldova in accordance with a plan recently revealed by a Russian general.

After Ukraine’s rejection of Russia’s latest peace offer last month, Russia appears to have fallen back to its “Plan B,” and is now preparing to annex the Kherson Oblast bordering on Crimea even before the war has ended. In fact, Kherson’s Russia-appointed leader has already petitioned for unification with Russia, which Moscow sought to legitimize by requesting a popular referendum prior to annexation. Previous reports indicate that Russia is intending to pursue a similar strategy in the Donbas. But how might Putin respond if, after Kherson or the Donbas are annexed by Russia, a Ukrainian counteroffensive succeeded in capturing a significant portion of these now-Russian territories and Russian forces were unable to dislodge them? Under those circumstances, Putin might resort to using tactical nuclear weapons to defeat the Ukrainian military, rather than suffer the indignity of having Russian territory fall under long-term foreign occupation for the first time since World War II.

One senior U.S. intelligence official has speculated that General Valery Gerasimov, who serves as the chief of the General Staff of the Russian Armed Forces, may have recently visited Russian troops in Ukraine to brief Russian generals on potential future use of nuclear weapons in Ukraine. In accordance with Russia’s military doctrine to “escalate in order to de-escalate,” Putin could authorize the use of tactical nuclear weapons in Ukraine in an unprecedented Russian demonstration of shock and awe. Russia has already employed a number of dual-use nuclear delivery systems such as the 9K720 Iskander-M short-Range ballistic missile (SRBM), Kh-47M2 Kinzhal hypersonic air-launched ballistic missile (ALBM), 3M-54 Kalibr cruise missile, Kh-101 Raduga air-launched cruise missile, 2S7 Pion 203mm self-propelled artillery, and 2S4 Tyulpan 240mm self-propelled heavy mortars to attack Ukrainian targets. Thus, it is very possible that Russia could make preparations to employ its tactical nuclear weapons without any advance warning to the United States or NATO, let alone Ukraine. Meanwhile, as Peter Pry has observed, Russian strategic nuclear forces have been on high alert and “special combat duty” since February 27—equivalent to DEFCON 2 or DEFCON 3 within the United States. Thus, Russia could launch all of its intercontinental ballistic missiles within only a few minutes in the unlikely event that the United States were to respond with a limited nuclear retaliatory strike against Russia.

While Biden has suggested publicly that Putin is bluffing when he threatens to use nuclear weapons, he appears to consider these threats increasingly credible as he has raised America’s nuclear alert status for the first time since Russia invaded Ukraine. Both of the United States’ E-6B Mercury TACAMO-Looking Glass aircraft are now airborne as well as the country’s airborne strategic command post aircraft, which could be used to transmit nuclear launch orders in the event Biden authorized the use of nuclear weapons against Russia and the U.S. Strategic Command Global Operations Center were destroyed or otherwise incapacitated.

How Putin might employ nuclear weapons in Ukraine is a matter of much speculation. One option might be for Russia to detonate low-yield nuclear Electromagnetic Pulse (EMP) weapons many miles above the Ukrainian capital of Kyiv, shutting down all electronics, communications, and transportation in both regions. While not killing any civilians directly, such a nuclear EMP attack would still precipitate humanitarian disasters as the Ukrainian government struggled to restore essential services to the city. Russia could also employ one or more of its estimated 2,500 sub-kiloton yield battlefield nuclear weapons against Ukrainian troops in an unpopulated rural area of the Donbas region designed to inflict maximum casualties on Ukrainian military forces and break the back of Ukrainian military resistance in the Donbas. If Ukraine refused to surrender following these nuclear attacks, Putin could then threaten to employ his nuclear arsenal to physically destroy part or all of a major Ukrainian city, just as the United States did to the Japanese cities of Hiroshima and Nagasaki during World War II, if they did not capitulate swiftly and surrender on Russian terms.

How might NATO respond to a nuclear strike on Ukraine? Given the fact that Ukraine is a non-NATO country, Article V’s demand for collective defense could not be invoked and, even if it were, all thirty NATO members would have to vote to authorize direct NATO military action against Russia. I believe NATO would be very unlikely to do so out of fear that Russia might retaliate by employing nuclear weapons on their own nations or that a direct military response against Russia might even escalate to a full-scale nuclear exchange between the United States, NATO, and the Russian Federation. Thus, Russia’s use of tactical nuclear weapons in Ukraine, far from uniting NATO around a direct military response against Russia, might well have the opposite effect and result in further dividing it, prompting calls to de-escalate the Russo-Ukrainian War as quickly as possible to avert further Russian nuclear strikes.

Hence, a Russian employment of a small number of tactical nuclear weapons in Ukraine could very well prove to be Putin's “trump card” that he could use to enable Russia to achieve an overwhelming military victory, force Ukraine into an unconditional surrender, and compel the replacement of the Zelenskyy government with one more acceptable to Moscow. Such a victory could potentially restore Russian prestige to near Cold War levels and might enable Russia to use nuclear blackmail to pressure the other former Soviet republics to accept a Russian sphere of influence over them.

The longer the Biden administration prolongs the war in Ukraine and the more it helps the Armed Forces of Ukraine achieve tactical victories on the battlefield, the higher the chances Putin will use nuclear weapons. This sobering realization should prompt the Biden administration to rethink the wisdom of continuing its dangerous and extremely risky strategy of sending Ukraine massive U.S. arms shipments with the goal of “defeating” Russia. It should cause senior administration officials to consider ways to incentivize both Russia and Ukraine to seek a mutually acceptable, negotiated peace agreement to end to the war as quickly as possible.

As part of a peace deal, Ukraine would agree to permanent neutrality in order to satisfy Russian security concerns that Ukraine could join NATO, which provoked them to engage in their illegal war of aggression. In exchange, Russia would have to agree to a withdraw all of its troops from Ukrainian territory, except for part of the Donbas and Crimea which Russia annexed eight years ago, followed by an internationally observed plebiscite to determine whether the residents of the Donbas want to unite with Russia or remain with Ukraine. Such an agreement would serve to ensure Ukraine’s continued independence and could be followed by the gradual normalization of diplomatic and trade relations with Russia. Afterward, this could be followed by a mutual security agreement removing Western NATO troops from Eastern Europe in return for a full Russian military withdrawal from Belarus and Ukraine, effectively reverting NATO to its pre-2016 status quo. That would serve to greatly reduce the risks of a future conflict with Russia while helping to neutralize its military alliance with Communist China.